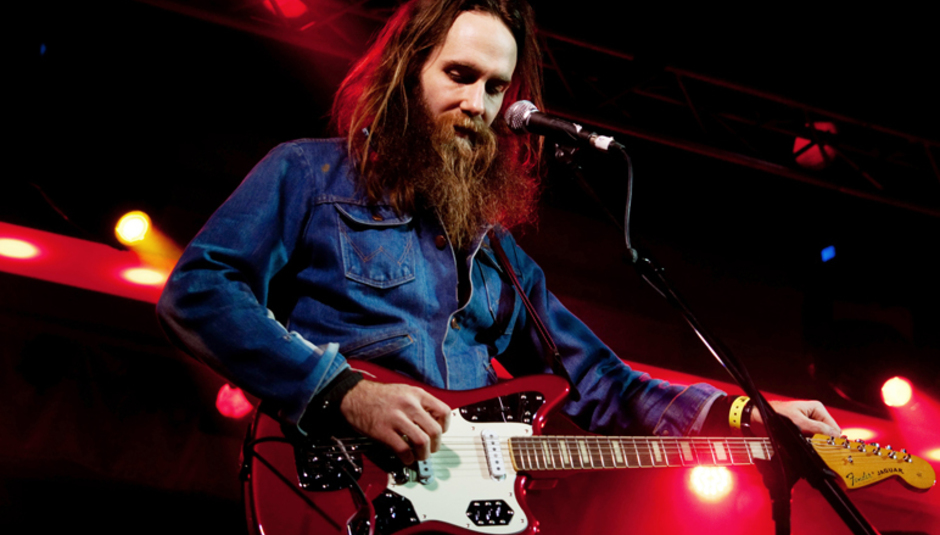 Messrs Lukowski and Bloomfield offer up their final reflections on the last day of the last ATP festival the last ten years.

In the last three or four years I have almost certainly written more live reviews of Shellac than any other band - given their notorious tardiness with writing new material (is it my imagination or is there a new song played this weekend, one with an almost Zep-ish riff?) there's a definite temptation to simply write 'see previous'. But then, that would suggest there was anything standard about a Shellac set; there is probably no other band on earth that could drag half of Butlins up at half one in the afternoon. "Do I look like I can fuck?" enquires a waxen Todd Trainer, at the end of a particularly acerbic Albini rant about the noisy copulation of his neighbours. Um, no, fair point. He doesn't even look like he can walk, let alone drum. But he does. He drums lots of Shellac songs, and each and every one feels like a slap to the nervous system. You can't get bored of that.

Josh T Pearson spends a good five to ten minutes of the start of his set mumbling jokes, showing off his new hat box (admittedly impressive) and generally giving the impression of being not a haunted soul, but a very very very hungover man in a stetson. Then ragged, lush distortion flares from every angle and we're sucked into the flaring maelstrom of his troubled songs. He's hurt not one bit by the presence of Lift to Experience drummer Andrew Young, a human whirlwind who stands shoulder to shoulder with the Staniers and Trainers of the weekend; rumours reach me of a Texas-Jerusalem Crossroads Don't Look Back Show at the Southbank next year; this could only be a sensational thing. (AL)

As yet another reminder that age is no barrier to rocking out (which certainly is a recurrent theme this weekend), The Magic Band provide an unexpected treat for this reviewer. Whilst we’re not entirely familiar with Beefheart’s material and thus couldn’t possible comment on a colleague’s aspersion that they just sound like an ‘old man funk band’ today, we do have a hell of a time during their performance. Besides winning the award for Best Headgear of the weekend (Sunn O)))‘s Atilla Csihar was disqualified for looking too ridiculous), the band play a rambunctious set of blues, funk and fried out country rock that it would be entirely apt analogise as a gumbo. We’re especially keen on their run through of ‘Moonlight On Vermont’, and thankfully the band aren’t taking things too seriously (in the spirit of Beefheart himself) with John French’s slightly awkward, yet lighthearted patter adding a little colour to what could have been a bit of a dry exhumation. (PB)

Pressure to go eat puts paid to seeing too much of Deerhoof, but they sound great - spiky, precise, colourful and improbable. Somehow they remind me of my great discovery of the two December ATPs - The Spongebob Squarepants Movie. Satomi Matsuzaki apologises for making somebody at the front nauseous; I get the impression they don't really mind.

Mudhoney sound gooooood. The 47-year-old Mark Arm sashays, swings, bends and flails like a man a third of his age (it's actually a bit disorientating when he straps on a guitar and stands stock still) and his snarl is rich and thick. Moreover, it's an incredibly cohesive set, 'The Lucky Ones' and 'Touch Me I'm Sick' separated by a heartbeat, not a generation.

Make up for my absence on Friday by catching Fuck Buttons' extra show; feels a little flabbier than their show at Heaven last month, but by the time they hit the Tarot Sport-saturated home straight the balance is nicely restored.

The funniest thing about Sunn O))) fans is their total inability to accept how hilariously camp their idols are. This goes doubly for tonight's Monoliths & Dimensions-show; when I enter, Atilla is growling away under some hilariously rudimentary green underlighting; come the end, he's wearing the King of the Ringwraiths' crown whilst solemnly intoning something or other in Latin. It's hysterically funny, not that any of the Sunn hardcore seem appreciative of my chuckles. Anyway, it's also pretty good, certainly in comparison to the mind-numbing uneventful GrimmRobe set, distorted bleeds of mutilated brass screaming painfully through the dry ice and sky-touching drones. Still reckon this set would god down quite well at Jongleurs, mind.

To this non-fan's ears, The Mars Volta are just a handful of cassocks and about three octaves away from occupying equally daft terrain. Though they were doing their best to occupy it tonight thanks to Cedrick Bixler-Zavala's roadie/tea monkey, who brought him a fresh brew every five minutes or so, each one roundly ignored. It was weirdly hypnotic, and provided an oddly comforting centre to a set that felt like a grab bag of virtuoso moments possessed of little cohesion or drive. Or so I'd say; the basic case against the Mars Volta is as old as the hills and hardly bears repeating. You enjoy two minute bass solos or you don't, 'twas good of them to drop by regardless. (AL)

Asides from Bardo Pond, we reckon that Sleepy Sun might have been the highest act we see all weekend. Well, just one member in particular: their female singer reminds us of a pixie let loose in the medicine cabinet, and we can’t take our eyes off her all performance. That said, their expressively sunny take on pyschedelia is well polished and never stops being fun: from the Jefferson Airplane boogie of ‘White Dove’ through to the mournful gospel of ‘Lord’ they’re a welcome treat on Sunday night. Though they’re at their best when they’re using the full potential of their three guitar lineup to create a cacophony of grooves, it’s great to see a band who look like they’ve partied all weekend and don’t intend to stop until the end of the night.

Lightning Bolt are very loud on Sunday night. We say this because DiS has opted to head to Polvo to round off our celebration of ATP’s Ten Years, and the sound from Reds downstairs is leaking through the ceiling and shaking the floor of Centre Stage. It’s reasonable for the Chapel Hill fourpiece to maybe feel a little disheartened at the prospect of a graveyard set and as Dave Brylawski jokes about us all being the stragglers at the party, it’s with a hint of severity. Not that anyone should be worried, because they lay on a set that ends the weekend in triumphant style, chiming guitars spiralling and dogfighting as an appreciative Tyondai Braxton watches from the audience. The titanic riffing of and scale bending of 'Rock Post Rock' would have been our highlight, had it not been for a closing salvo of a tautly paranoid 'Enemy Insects' seguing straight into a the anthemic stomp of 'Beggar’s Bowl', which even has the survivors of Lightning Bolt on their feet, punching the air and dancing around the prone body of an ATP casualty. It seems only fitting that on a fantastic weekend of music when we barely saw a band we could demean by calling simply ‘good’, Ten Years of ATP ends with a flash of sheer brilliance from a band who promise to be back for the next anniversary. So will we. (PB) Lighting Bolt were indeed very loud, all the more so for being joined by Afrirampo's Oni and Picachu, who screech a bit before embarking up a probably slightly grope-tastic bit of crowd-surfing. It's one in, one out for the whole set, and to be honest it's too busy - you don't watch Lightning Bolt, you get involved. There's probably some sort of vague metaphor here for ATP as a whole: it's bigger and more popular than it's ever been, and compared to the slightly dour MBV edition, this was heaps of fun, but at the same time, can ATP really go on exactly like this for another ten years and still maintain the magic it had when it was a brave novelty to stage and see these bands? I truly hope for some weirder shit next year. Whatever: it's been a good ten years and everyone involved should be thoroughly proud.