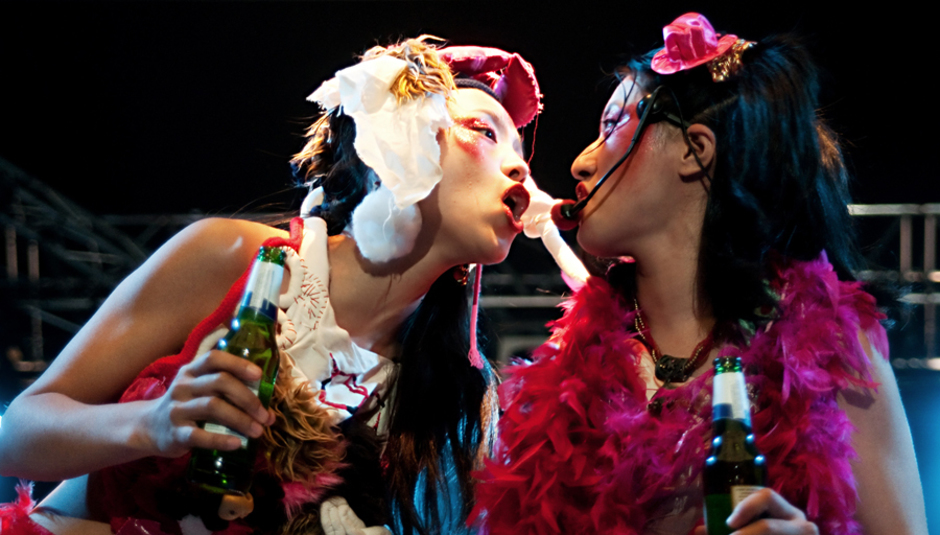 As Friday waned and Saturday waxed at ATP's ten years bash, so tardy reviewer Andrzej Lukowski joined the doughty Philip Bloomfield in reporting on the weekend's musical happenings for YOUR pleasure.

There’s very few things that could drag us out of bed on a Saturday at ATP with a hangover best described as ‘stinking’ and some severe misgivings about what may or may not have happened last night (did we really rap the whole of ‘No Diggity’ wearing shutter shades in front of a room full of people?), but two cute Japanese girls in facepaint and leotards jumping around the Pavilion Stage is one of a very small number of eventualities that fulfil that criterion.

Afrirampo are a curious choice for the opening act on the Pavilion Stage, but Oni and Pikachu are completely undaunted by the prospect. Their set actually justifies our use, at the time, of the hideous phrase ‘a children’s tv show on crack’, so bizarre and joyous does it prove. Their playful demeanour disguises some very talented musicianship: it’s not every drummer who can continue playing whilst doing star jumps, nor any guitarist whose formidable shredding can keep us a good deal longer than we’d intended. They even challenge the odds-on Shellac for the Best Stage Banter at ATP, with something deeply surreal about whales and bananas. Afrirampo's gain is OM's loss, unfortunately. DiS manages to tear itself away from the Pavilion Stage in time to catch the last 15 minutes of a pitch black OM set which shows that the new and improved touring lineup, performing as a trio, is a force to be reckoned with. Al Cisneros seems re-energised since May’s Sleep re-union, headbanging enthusiastically over the pounding riff of ‘Thebes’, but even he can’t divert attention from the extra live member fanatically smashing a tambourine into his forehead in time to the beat. We’re left eating a rather large slice of humble pie with regards to our statement that OM have always been 'a bit boring' live.

If there’s one thing we learnt this ATP, it’s that a Shellac soundcheck can be just as entertaining as the actual performance. This is the first of two shows by ATPs ‘house band’, and Bob Weston’s expletive filled mic testing really shouldn’t be as funny as it is. In fact, by all rights, Shellac probably shouldn’t be as good as they are: they’re a band made up of mixing engineers and a warehouse manager. But it’s Shellac, and on a bad day, they’d still be one of the greatest live bands we’re likely to see, so we get front and centre for the Todd Trainer experience. Luckily, this set definitely falls on a good day: whilst their trademark stage banter might not be quite as good as Sundays, the performance itself near flawless, Weston’s clanking bass sounding especially cutting. A more active (read: less hungover or more drunk) certainly crowd contributes, but Albini’s shredded treatment of DiS favourite ‘Watch Song’ is certainly to blame for many a stiff and sore body the next day. (PB)

At last year's Supersonic festival, a particularly virulent strain of indie snobbery gave lie to a number of otherwise perfectly rational music fans muttering about Battles as if they were some sort of embarrassing boyband Capsule had booked by mistake. No such atmosphere here, I'm pleased to report, possibly because with Mirrored emphatically more back-catalogue than current record, nobody needs to worry too much over whether or not any of the rest of it's as good as 'Atlas'. 'Race: In' sets every sense a tingling, spiking through the mid afternoon beer fug in a wave of friendly tension, and a dropped two thirds through 'Atlas' is every bit as joyous as it should be. Troublingly, though, the new 'songs' appear to be sprawling semi-improvisations, elongated motifs that demonstrate little more than the fact that John Stanier is an almost unfairly tight drummer. AND ANY CHILD COULD TELL YOU THAT. (AL) But really, Dale Crover and Coady Willis shouldn’t give up their dayjob is the reasonable conclusion to reach, based on a jawdropping Melvins set that proves age is no barrier to pulling out all the stops. The unexplained appearance of Jared in a 'suburban turban' (Steve Albini’s admission about being unable to find a card game all weekend rules out our hilarious theory that he lost his other clothes in a poker game) should have sounded the alarm, but it takes until they pull out ‘Hooch’ hot on the heels of a stomping ‘Billy Fish’ about half way through for the bell to drop. Of course, opening with the mighty riff of ‘Pigs Of The Roman Empire’ is impressive, but hearing the oriental intro to ‘The Bit’ pretty much means we lose what remained of our metaphorical shit. And just when we thought it couldn’t get any better, an extended outro culminates in two extra drummers being wheeled out to join the battery as Jared dives into the crowd hollering a strange call to arms about the dangers of chance. If that’s not an end of decade highlight, we don’t know what is. (PB) Those extra drummers, of course, young Phil, are those of Modest Mouse. On paper, Isaac Brock and co are too big for this festival; or at the very least they ought not to actually be playing a smaller stage than their last visit, back at 2007's ATP Vs The Fans. But as the indiest band to possess two live drummers, the indiest band to have ever topped the US charts, a band so indie that erstwhile axeman Johnny Marr appears to have thought 'I'd feel comfortable joining somebody less indie. Like The Cribs'; well, this feels just perfect (uh, unless you name's Deal - by all accounts The Breeders are utterly gazumped by ATP's dubious decision to put MM on at EXACTLY the same time). Brock is drinking some horrendous cocktail of Cayenne pepper and vinegar to 'help' his ravaged throat, but suffering or not, he sounds more engaged than a few days later at the Electric Ballroom. A couple of songs suffer a little from not having a proper backing vocalist, but the band blast through this cheerily random selection of their Noughties output with such galeforce intensity that it matters little. The generous number of The Moon & Antarctica cuts are an inevitable high (particularly the feverish thunderclap of a 'Tiny Cities Made of Ashes'), but it's nice to see how well the We Were Dead... tracks hold up, notably a sweeping 'Parting of the Sensory', and 'Dashboard', which offers the evening's only actual 'hit'. There's no 'Float On', and nobody really cares; this is Modest Mouse, and they are indie as fuck - long may they remain so.

BEAK> are a funny old proposition; one of the strengths (indeed, the chief point) of their self-titled debut is its grab-baggy quality; live, the tracks are recreated faithfully to the point that it kind of feels like they're randomly jamming out on a series of themes - a kraut one, a sludge one, a ghostly one, a roaring one; they don't really seem to have coalesced into actual songs.But a groove is found before time is up, and the titanic concluding 'Battery Point' (I think) hits home like a warm veil of midnight rain. (AL)

We don’t know whether it’s the hour of day at which Sunn O))) have chosen to unleash their GrimmRobe material on ATP, or the sheer density of tonight’s sound, but their performance feels more of an endurance test than you’d expect a pair of guys in cowls playing feedback in front of a walls of amps ever would. We’re still in two minds about tonight’s performance: as a feat of stagecraft it’s impressive, hypnotic and punishing; but once you take away the smoke, volume and lighting, it’s hard to reach a conclusion other than that the emperor isn’t really wearing any clothes. Ironically, they never feel like they’re ever managed to defy Earth’s gravity and move into a sound of their own, yet simultaneously lack the momentum that Earth have even at their most droned out. Try telling that to the various blissed-out bodies strewn on the floor at 3am though. (PB)