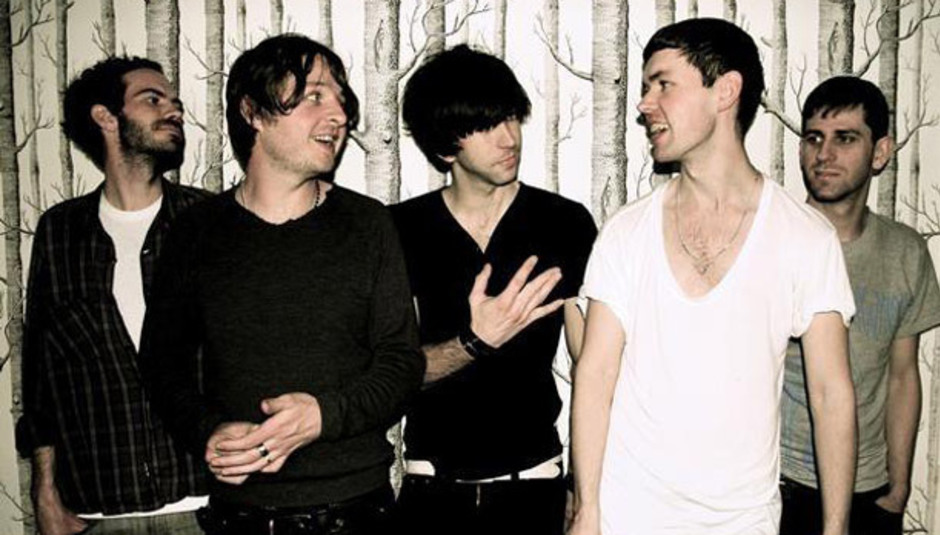 It's the time of year to list the best records of the year. Ahead of DiS' top 50 albums of the year, we've asked some of our favourite acts to tell us which five albums they've had in heavy rotation.

In this part we have The Northwestern (pictured), who formed from the ashes of Hope of the States and have their debut album due in 2010. There's also the much beloved by the DiS community Johnny Foreigner (we've kept Alexei's spelling and style, in case anyone was wondering if our sub-editor is already onto their second bottle of Port) and Japandroids, whose Post-Nothing album has, er, really struck, er, a chord, er, with fans of abrasive skate punk noize fans.

However, kicking things off is Jonathan from one of the heavily tipped 'bands for 2010':

Solange did a pretty great cover of 'Stillness is the Move' from this album recently and it just goes to show how well the songs translate into even the most pop-orinentated languages. Surreal, danceable, dischordant, familiar yet so very alien - a great approach to vocal arrangement too.

A masterclass in restraint. Four weirdo snipers hitting bullseyes for half an hour, every inch of this is a perfect accurate balance between instruments, never cluttered, always complex, always simple. Equisite atmosphere, performance and arrangement.

Brilliant forward-thinking moods and moments, yes this caught the imagination of pretty much everyone this year, including us. Very optimistic, yet tragic and disconnected somehow.

Beautiful songs, performed expertly, just what we all need really. Intimate without being sentimental.

Ridiculous and futuristic, this is like pure hedonism in noughts and ones, totally overwhelming sonically, something very modern about this that is hard to describe - it's like a very powerful drug experience. The Animal Collective album captures something similar in it's more extreme moments. Party music - NOT dinner-party music.


There is little we can say about this other than we have watched it several hundred times.

Also we used this year to check up on the fate of Rik Waller, the rotund chap from from reality TV of yesteryear. This is far, far stranger than you may think - check out 'my thoughts' from his website for example.

Everything Everything independently released a bunch of 7inch singles in 2009. They recently signed to Geffen and their debut album is due in 2010. MySpace / Twitter.

Sam Herlihy from The Northwestern

In my very humble and largely "dumb/ignorant to new stuff" opinion, 2009 was a rubbish year for new stuff. Though to be fair I am really slow on new records so this year I played catch up with the last few years: Why?/FlyingLotus/Burial/Deerhunter blah on blah. Next year, I intend my finger to be damn near buried IN the pulse let alone on it. Next year is all about Gold Panda/Blocks/TheNW/newTomWaits/CapeWrath. Everything else will be awful, possibly.

Possibly the only show I saw all year and definitely the best show I have ever seen. Carney barking wonderment in a Paris hooker's palladium dream hall. Second CD is funnier than every supposed "hip" and "hilarious" standup lady or sir of the last ten years.

To be honest I don't even like it that much at all but I have listened to it a huge amount. I love the tiny bits of it which aren't so polite and uptight sounding. Clever, talented gentlemen, hopefully to make an awesome record next time.

Listened to this on tour loads. First track, first time, sucked. Record got better and better as it went along. Returned to the bus stereo endlessly afterwards. Too many lyrics about dragons but really trashy and poppy songs with sweet drums and stupid sections.

When they ignore the songs, they sssuuucccckkk. When they don't they rule. For 'My Girls'/'Brothersport'/'Summertime Clothes' etc. Not for any of the droney, my first sampler and delay effect tutorial rubbish which does it's best to sink the record. 'My Girls', probably song of the year.

Gold Panda Nowhere to go, Nothing to do

I think this is just a compilation of demos and bits and pieces but it has an amazing hissy, rickety lurch to it which makes it all oddly emotional. For samples and hip-hop-esque beats to sound this melancholic is silly impressive. His debut album proper is the record I am most looking forward to hearing next year by a million miles.

The Northwestern released an EP and some 7inches in 2009, visit their myspace for more info. Or follow them on Twitter

Probably the record released in 2009 that I listened to the most in 2009. Enough said.

Underrated album by criminally underrated band. I'm going to see them in Vancouver next week - my 3rd time in 2 years - they really are that good.

Obits I Blame You

I love everything (musical) Rick Froberg has ever done.

They should have named this album 'Rated E' (the E standing for EPIC!!!!!)

Pretty much every single sub-genre of rock n roll on one single record - and then some.

Their debut album Post-Nothing _is out now. Read the DiS review here.

i totally missed this off my list last year so it goes here. i listened to it a few times and thought it was like, just alright. and then i heard the dice just wasnt loaded.. and it was like, all totally about me and this girl id broked up (not literally) with. i listened to it all walking home one awful rainy night and all the songs just clicked, more so than ive ever had with any album ever, and i felt like a complete tool. i tried to write a list of why i loved it and pretty much just wrote down every reason to love an album ever, so, fuckit, everything about this record is FUCKING PERFECT and ive listened to it more than every other record on this list put together its kinda embarrassing to cocksuck people who are yr friends, but yeh, hands down this is my favourite record of 2009.

tubelord album, at last. and it has all their best songs on it and its produced all shiny and amazing and the songs we hadnt heard before are (literally) incredible. weve been killing it in vans and ipods all this megatour, only, its unkillable. "i woke up..." is probably my favourite actual song of the year. to clarify, we robbed the song title off them..

as much as i'd love to do a track by track summary of why this album is awesomes im a bit wary of breaking the industry cos its not out till feb. tis a beautiful and warm autumn evening party album and a barbed and scything account of relationship wrongs at the same time: win. another van cd already being scratched up thru constant use and FRANCIS BEING SHIT AT PUTTING THINGS BACK, LOVE YOU!! its just, lovelystunninggreatness up with you forgot it in people. there's a reason they're leaders our tweexcore scene, you know.

both these guys have been in a bunch of bands weve loved (one of them us). this is juns pick, he's a bit/very stoned and tired (we're averaging 4 hours sleep a night this week) : i'm obssesed with lovers rock, the keyboard sounds and the drumming, and im half asleep and not good with words. : here is my attempt. its kinda all swirly and very very lush (the word not the band) (tho it is kinda shoegazey) and everynow and again some beautiful melody hook (LITERALLY) jumps out and fucks you. and sometimes it has the funk good too.

right, 1) kelly i know what yr thinking, and, fuck off, yr asleep thus not available for consultation and 2) i had some songs on a mix tape (srs) someone made me and totally fell in love with her before i knew she was superhot so this is still legit.

sort of sameas tubelord in that its loads of songs i knew all hifid up and packaged nice. i think her lyrics/poems/diseusementereuax are beautiful, im not sure if i like, toadally relate or just want to in the same weird way i can watch My So Called Life on dodgy tv websites for hours on end. i think it'll totally end up on the mental list of cds in my head i know 90% of my friends will be , LOLWUT when i bring up. but then it can have some wierd fantasy affair with the second (and clearly greatest) longpigs album.

JoFo's latest album Grace and the Bigger Picture is out now. MySpace / Twitter.

Click here for more 'Favourite Fives' from The Maccabees, Battles, Girls, The Veils and more...

In Photos: Regina Spektor @ The Apoll...