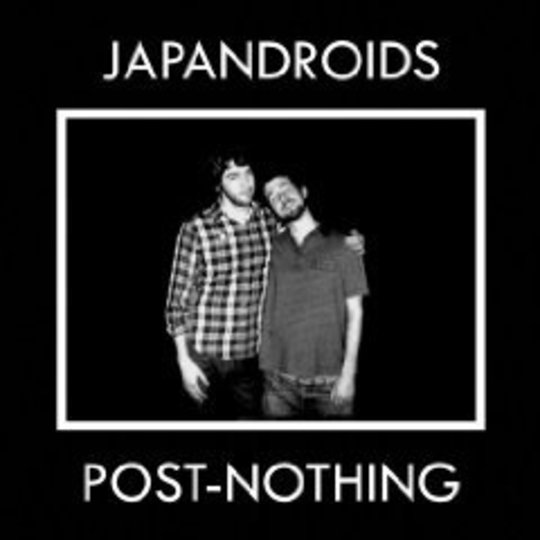 On the face of it, Vancouver’s Japandroids should prove an inspiration to every fat, underachieving rock slob under the sun. You see, Brian King and David Prowse are - in some respects - patently just a couple of schlubs who wanted a fun, dumb rawk out, as a fun, dumb rawk band. Only, they couldn't be bothered to assemble the personnel required to do so, the recruitment drive stalling with one very large distortion peddle and the pair's decision to 'sing' themselves. Lyrics? Well, we'll deal with them more later, but certainly they involve a huge number of Vancouver-based puns and in-jokes (see particularly ‘Darkness On The Edge Of Gastown’). Oh, and they named their band Japandroids, ferchissakes.

In fairness, Post-Nothing is noticeably more focussed than the preceding Lullaby Death Jams EP. There the duo basically stretched out in whatever direction they felt like: the glammy holler of ‘No Allegiance To The Queen’, ‘Lucifer’s Symphony’, an ominous incantation that simply sped up until it hit pop velocity; all via a track entitled ‘Sexual Aerosol’. The fact it had any sense of homogeneity at all is essentially testament to the fact Japandroids don’t play very many instruments.

For their debut LP - finally receiving its proper UK release - matters are a little less broad. Blearily honest fuzz rock with a hazy nu-gaze corona is essentially what’s on the menu. If you’re feeling particularly fanciful you could even accuse Post-Nothing of being focussed enough to sport a vague through thread: we start off as ‘The Boys Are Leaving Town’ (clattering drums, ragged, out of the blocks shouts of enthusiasm, the almost Boy’s Own rhetoric of the query “will we find our way back home?”), but instantly hit rockier, more pathetic waters with ‘Young Hearts Spark Fire’ (“we used to dream, but now we worry about dying”).

By the bludgeoning sex-throb of the fast, hard mid-point 'Heart Sweats', allusions to innocence and youth have been jettisoned for jaded mockery - “your heart is cold as ice girl, I should know, I’ve been to the North Pole... your style is such a mess girl, I should know, I used to date a stylist”. When penultimate track ‘Sovereignty’ arrives, even such worldly thoughts have been left behind: over an icy guitar haze, King or Prowse howls a drained hymn of escape. The line “we’ll leave tonight and we’ll leave together” should echo a thousand dreamer’s anthems; instead it sounds horribly numb, the sense of severance only broken as he spits the chorus “it’s raining in Vancouver, but I don’t give a fuck, because I'm far from home tonight”. All ties with everything finally give way under the Will-o'-wisp flicker of the pallid ‘I Quit Girls’ (“she was just one of those girls. After her, I quit girls”).

Maybe it’s nothing so developed as all that, but here’s the irrefutable thing about Post-Nothing, the reason why it’s so more than the stoopid sum of its stoopid musical parts. Yes, there’s technically more instrumental breadth in most episodes of Sesame Street, but this is a deeply, troublingly emotional record. These could have been good time anthems, these could have been beery forays into masculine angst, these could have been about how Japandroids’ women done them wrong, about how they wanted to live fast and die young and make money and drive shiny cars. But they’re not – they’re songs about fading away, about suburban numbness and blank interactions. The fact they’re hacked out in such robust sonic textures actually serves to intensify the songs emotionally – the music is an ever-swirling pool of raw power, the words shaping that power into something disquieting. Sure there’s humour here, but there’s unselfpitying, unpoetic, unvarnished honesty too, the modern Western malaise of personal and social detachment not etched in Radiohead acid or Talking Heads doodles, but drilled with jackhammer force. Ultimately, there is no pretention to Japandoids: maybe they just couldn’t be bothered.