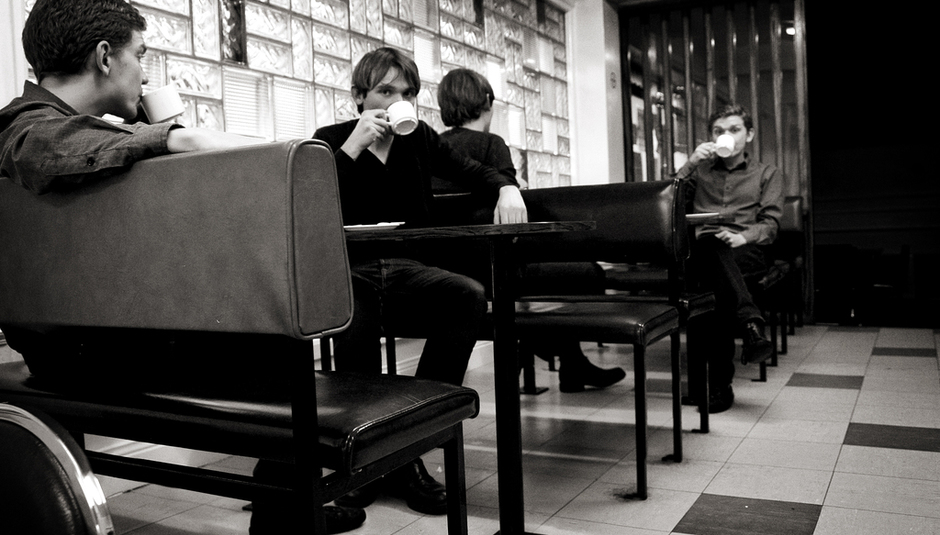 Sunderland's much-loved art poppers Field Music are officially back from their nearly-three-year hiatus. The brothers Brewis and cohorts are currently appearing in a venue near you (well, assuming you live near a major UK city, New York or Chicago), and have a new double album - Field Music (Measure) - slated for release February 15 on Memphis Industries. We phoned David from the band and he told us why he feels the time is right to come back, why he is sick of being labelled post-punk and why he is prone to ripping off Peter Gabriel.

DiS: Hello, why have you decided to end Field Music’s hiatus and release new material?

David Brewis: I just think that having a break made us realise that the possibilities of what we could get away with as field music were actually much bigger than we thought and so once we’d done the School of Language and The Week That Was records there was a sense that we could have done some of these things within a field music record. There was enough time to just become a little bit more relaxed about the idea. Whatever expectations we had about what Field Music was supposed to sound like had had time to dissipate.

DiS: Do you think the new material has been informed by the side projects?

DB: Yeah absolutely, in a standard musical way that we tried stuff out in the context of the side projects and then thought 'yeah, actually we could do that as Field Music.' I think we keep getting better at what we do, so lots of things that we tried on School of Language and The Week That Was meant that we could take those ideas back to Field Music. Also the touring was quite different for both bands, so I think we play differently now. Doing the School of Language tour in the states on my own meant that I was playing guitar every night for four weeks which was quite unusual for me. I don’t know whether you could do a UK tour long enough to get that amount of guitar playing experience under your belt.

DiS: So does the return of Field Music mean that the School of Language and The Week That Was projects are subsumed into Field Music for now?

DB: I think mostly yeah. I mean The Week That Was, Peter only ever intended that to be a record rather than a band. There was never any sense that he would want to do another one; and for me most of what I want to do musically now I think I could do within Field Music. I don’t think I’ll be doing another School of Language record for quite some time.

DiS: Why did you decide to release a double album?

DB: Because we could. Again, I think it goes along with thinking the possibilities of what Field Music are wide so we should show what those possibilities can be. We haven’t done that with this one record, but it feels like we have a lot more space to try loads of things. Also all of our records in the past have been very concise, quite coherent in one way or another, so from the very start we said to each other ‘let’s do something that’s not coherent’. There are lots of records I like that any sense of coherence comes from the fact that there’s just so much information. Like The White Album or Tusk or Sign O' The Times, those kinds of big, big albums. It’s probably just another chapter in our long history of commercial suicide but we have to give it a go.

DiS: What impact do you think the new members Kevin Dosdale (guitar/keys) and Ian Black (bass) have had on Field Music’s sound?

DB: The new members are not on the record. In terms of making the record not having Andy Moore had an impact. There is a lot less piano on there and there is less sense that there is a fixed format to how we had to record. In terms of getting new people in the band it affects how we are live greatly. It’s a little bit looser and quite a lot heavier and there is a much greater dynamic range with four people. There is a sense that we really have to embrace what we can do with live music, we used to think that the recorded album was the main product but now we have put a lot more focus on the live performance.

DiS: Why did you decide to release another eponymous album title?

DB: Partly a sense of starting again, a redefinition of what the band is. Like a lot of bands, I’m kind of sick of the adjective post-punk. I like Wire, I’ve heard an XTC album, and that’s it. I don’t mind hugely but… post-punk? Really? Well, like everything since 1979, maybe. Also we’re ripping off Peter Gabriel, which we do quite a lot. His first four albums were self-titled, but that was felt to be a terrible thing to do for the American market so they all had to have bracketed titles, so we thought 'yeah, let's do that'. Let’s call it Field Music (Measure). Measure refers to the song on the album and also to the artwork on the cover.

DiS: Finally, have you started your Christmas shopping?

DB: It’s most been online stuff, and I’ve learned from mistakes in the past where I’ve thought yeah I’ll just get that online and not remembered to actually order it till it’s too late. I often do that with people’s birthdays.

In Photos: Decemberists @ The Forum, ...