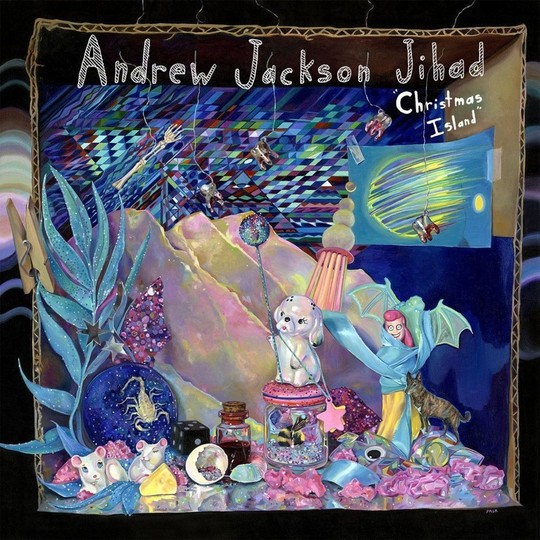 This folk punk four piece from Pheonix, Arizona are, to my mind, responsible for some of the most hilarious, terrifying and intellectually subversive music to come out of independent Americana in the last decade. They tour tirelessly for a dedicated fan base akin to that The Smiths received in their early days but have never quite gained a commercial presence to match their critical adoration. Andrew Jackson Jihad are a true one off, a combination of cerebral wit, raw punk energy and poetic delivery dressed up as four gawky looking dudes with guitars and a broad sense of the world's injustices.

Christmas Island marks the band's fifth full length and rather than reinvent an already established sound, they've merely smoothed out the edges in favour of a lighter, poppier production. Familiar themes of anxiety, psychological disorder, death, depression and social politics are all present and armed by the fragile masculinity in Sean Bonnette's vocals but there's a musical distinction missing that elevated past work to such peerless heights. Lyrically, this is as sharp and infectious as anything they've written, articulating an incredible sense of emotive first person storytelling that many other songwriters could simply never achieve. Production being the only criticism, it's easy to accept this as another step in their growth towards a larger fan base and simply enjoy the music on its own merits given the quality of Bonnette's mentalist lyricism.

Opener 'Temple Grandin' is a seismic punch of social commentary wrapped up in a straightforward punk melody. “Open up your murder eyes and see the ugly world that spat you out/ open up your ugly mouth and sing the words, it's how you spit em' out” are the first words spat from his mouth and though it may read like a regression into emo-angst adolescence you'll find the song becomes a somewhat oblique ode to autism activist Temple Grandin and the achievements of great, disabled figures in twentieth century culture. “Stevie Wonder did the bullshit/ Stevie Wonder did the bullshit, baby/write a nice pop song about it”:- the song's metaphoric writing isn't too hard to break through as Helen Keller is name dropped in the same breath as Grandin and Wonder, ending with a final refrain of the line “find a nicer way to kill it”, likely making reference to Grandin's fight for more humane treatment of animals bred to slaughter.

Grandin' pops up again later towards the end of the record on 'Temple Grandin Too', laying a thematic cohesion to the album's many peculiar topics of commentary. The highlights however lay with the sordid self deprecation and twisted imagination found in Bonnette's first person writing. Songs such as 'Linda Ronstadt' manage a touching balance of heart on sleeve hilarity and genuine integrity as he describes reaching a revelatory moment from “loosing his shit in a museum/ it was a video installation of Linda Ronstadt”.

What could be a novelty track turns out to be one of the most humane things he's ever written, painting a cathartic look into the moment we confront personal anguish in light of something overwhelmingly beautiful and purging :- “and I can't handle astounding works of beauty/ I think I like my pretty, pretty ugly/ but the beautiful soul I witnessed in that movie/ was an entirely different kind of overwhelming/ it was a dog that won't stop barking/ it was a cut that won't stop bleeding”. As the song ends with a refrain of “I almost made it through the year of choking down my fears but they're all gone for now all thanks to Linda Ronstadt” it strikes just how well Bonnette is at articulating humour and sadness in the same breath, this is the album's triumph.

Closer 'Angel of Death' will no doubt become a fan favourite, it's not quite the cathartic explosion that Knife Man's 'Big Bird' was but any track that opens with the line “I'm a blank page in a notepad waiting to be filled with countless drawings of cocks/ I'm a bathroom wall freshly painted over to cover up swastikas and the names of girls we called sluts” will draw favourable attention. When you think the self deprecating schtick might be getting old, Bonnette's observational humour breaks through, constantly bringing originality to an over familiar approach - “I'm the kool-aid stains on the mouth of a kid whose name is most likely Cody/ he had a juice box for breakfast and he carries a stick that he most likely found in the alley/ Cody doesn't have friends/ and his parents hate each other/ and he wants to find a better way to love his family”.

Christmas Island is undoubtedly the slowest burner in AJJ's catalogue, seemingly lacking the fervent energy and raw musical creativity of the past. Given time, you'll find its strengths lie elsewhere and you'll be more than willing to change to accommodate them. Long time fans are going to lap this up while newcomers will likely be wondering where this band has been all their lives.