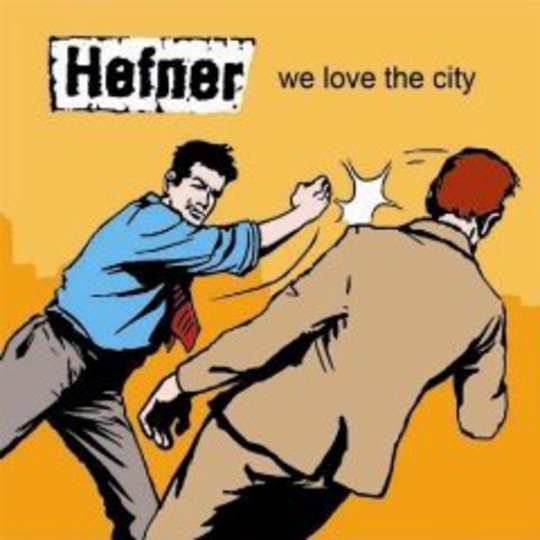 Hefner were always the indieist of indie bands. Often maligned as a Britpop act who arrived too late for Britpop – their debut came out in 1998 – in reality they had more in common with the indie scene of the Eighties. The band took their cues from The Smiths and The Wedding Present, not Blur or Oasis: they sang simple songs recorded on ‘proper’ instruments back when things like that seemed to matter; they were signed to Too Pure, the tiny label that launched PJ Harvey and was nicknamed ‘Too Poor’ due to its notorious lack of funds; they had overstated political beliefs; they were perennial favourites on the John Peel show; they were unlikely to win any beauty contests; and, critically, they were never going to break into the top ten.

At the time We Love The City first arrived back in 2000, they were probably still unaware of a self-appointed future as the ‘Britain’s Largest Small Band’. Singer-songwriter Darren Hayman had strung together 12 more earnest lyrics about the trouble with loving in London in your late twenties, and the band had honed twelve more tunes to take into the Roundhouse Studios, where they would lay down their third album. “This is sixth form poetry, not Keats or Yeats” sings Hayman on the record’s eponymous opener. He may be right but, like all great pop music, it hits the right at the heart as much as the head. The result of those sessions were 12 lovely little songs, running the gamut from bedroom soul to barroom singalong.

The title track outlines the typical love-hate relationship city-dwellers have with their surrounds as it builds to an unexpectedly stratospheric coda. 'The Greedy Ugly People' defines the arrogant exclusiveness of love to a wonderfully evocative steel guitar line. 'Good Fruit' shows Hayman’s ugly, desperate nasal whine to be the perfect vehicle to articulate the pains of lost love. 'Painting and Kissing' is an occasionally hilarious tale of un unexpected affair: “She took me down to her basement, she showed me all of her paintings/She sure couldn't paint”. 'Don’t Go' is a raggedly beautiful piece of seduction. Admittedly 'The Day That Thatcher Dies' - with its children’s choir and relentlessly catchy chorus - confirms them to have been around a decade too late for their own good. Nonetheless, it, like 'The Greater London Radio' and 'She Can’t Sleep No More' show the band’s ambition and range.

A decade on, after an electro offshoot, a series of solo records and a fallout with Too Pure that prevented him releasing anything for a couple of years, the copyright on Hefner’s back catalogue has reverted to Hayman and he’s set about reissuing their albums with oodles of extras. As the band always set about recording pretty much as live, the full demos included here add little to the final tracks. The remixes featured (by half-remembered names like Baxendale and Wisdom Of Harry) are equally dispensable. The handful of Hefner originals – b-sides and EP tracks – are, however, routinely excellent. Amongst them 'Christian Girls', an oft-recorded early song taken in this version from the Boxing Hefner compilation, is one of Hayman’s best: a sprightly paean to the purity of love. We Love The City isn’t Hayman’s masterpiece – that was previous LP The Fidelity Wars. Still, it’s a high watermark in the career of an underappreciated talent.