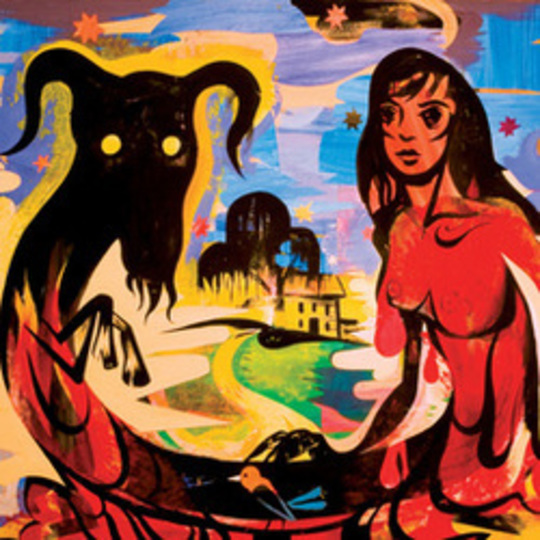 Although she’s been appearing on records (by The Geraldine Fibbers, Ethyl Meatplow, Scarnella, The Nels Cline Singers and many, many more) for over a quarter of a century, 2006 solo album Evangelista was arguably the most significant of Los Angeles-based singer Carla Bozulich’s career. Her debut for Constellation Records not only gave its name to the band she now fronts, but, more significantly, it is the record that pioneered the sonic territory that band have gone on to explore. Its heady mix of gothic blues, improvisational noise, howled and whispered vocals and moments of eerie calm continued on the first ‘proper’ Evangelista record, Hello, Voyager, and now resurfaces with Prince of Truth.

The seven bleak songs contained herein tiptoe around the fringes of melody. They constantly focus and refocus, leaving listeners with a feeling that something unknown is always going on in the background. They are like huge wall paintings lit only with a tiny candle: you are aware of their grandiose beauty even if you can’t quite make it out through the darkness.

Album opener 'The Slayer' gradually raises its head though a couple of minutes of jittery concrète cut-ups. Like a leviathan awakening, Evangelista build a threatening wall of sound before Bozulich intones with bleak insistence: “This is the speed I fly/I’m all alone and that you know”. The song soon shudders to a halt before reanimating with a clattering rhythm reminiscent of mid-period Einstürzende Neubauten, spattered with atonal, doom-laden guitars as the lyrics becomes a apocryphal chant.

The stop-start structure of the compositions could be attributed to the stop-start nature of their recording - a throat infection precluded Bozulich from participating in initial recording sessions in Montreal, so she added vocals and reassembled tracks with various overdubs back in LA. Such an assumption would ignore the artistry of construction at work here, however. As with her two previous LPs, Bozulich weaves uncanny connections through the fabric of sound.

'Tremble Dragonfly' creeps along the side of the room, fat plucks of bass like a dripping tap anchoring a mournful wail of strings and autoharp. 'I Lay There In Front Of Me Covered In Ice' provides the album’s prettiest moment. Heavy bass from Tara Barnes, Evangelista’s only other permanent member, and delicate guitar figures courtesy of Bozulich’s former personal and long-time musical partner Nels Cline, brush against Bozulich’s gently insistent vocals, as Dominic Cramp’s organ part (credited, not inaccurately, as 'fucking bitchen ass ruling organ') slides in underneath.

Elsewhere, 'You Are Jaguar' accelerates to a tearing pace until a breathless Bozulich finds the apex of calm at the centre of the musical storm, before hurling herself back into the next verse. 'Crack Teeth' is reminiscent of Lydia Lunch’s Smoke In The Shadows album, on which Bozulich contributed backing vocals, its noir lounge jazz traits and comical keyboard flourishes tethered to repetitious 4/4 rattle that eventually disintegrates.

The album’s final cut, 'On The Captain’s Side', opens, much like the Evangelista album’s self-titled first track, with a tremulous accordion part allied to a creaking that brings forth images of a ghost ship. Here Bozulich is the ghost, beckoning lost souls with a lyric provided by Tara Barnes: “I led the men that drank the lives of innocents”. It’s a devastating end, made all the more commanding for its absolute control. The sense that a terrible power, the leviathan’s bite, could be unleashed at any moment underlies this siren’s call.

On stage with her duo project Bloody Claws at the Old Blue Last back in May, Bozulich was visibly shaking with nerves. It seems odd that an artist capable combining coruscating noise and back streets jazz in the confident conception of these pitch black confessionals should be so unsure of herself. It’s nice to know she’s human though.