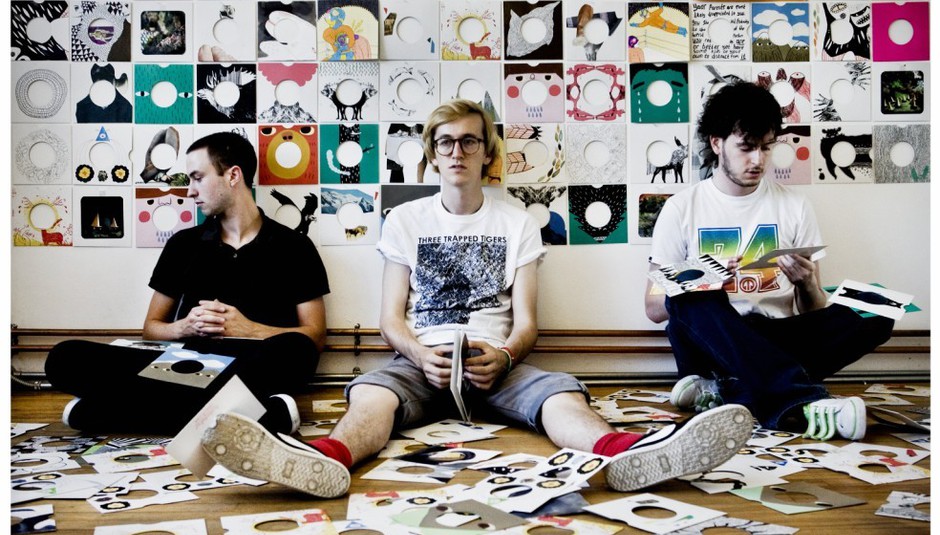 Hassle new boys Tubelord are having a bit of a Neil Buchanan/Tony Hart/Kirstin O'Brien moment in finding the artwork for their latest single 'Propeller', taken from their forthcoming LP Our First American Friends.

The single itself is out on September 28 and 500 singles will have a design by an artist from a group hand-picked for this very reason by frontman Jo Prendergast. The artwork is supposed to be influenced and indeed inspired by the single itself - in lyrics and concept. Pretty damn neat, huh?

We asked Jo his feelings on the ideas and concepts behind this ambition and told us the following:

"This project has been an experiment in retrospect, everyone involved was given the same conceptual brief 'Propeller'. Gathering their interpretations into visual forms and none are alike."

The artists were chosen, Jo says, because they are "inspiring, brilliant and perhaps passively influencing one another without being fully aware of it."

The project came together as a way of catalysing the process of all those involved to meeting like-minded and equally creative individuals - and a way to further future collaborative projects between artists.

On the interpretation of the artwork and concept, Jo said:

"The sleeves haven't been interpreted by any lyrics from the song but instead are related to the album artwork. Although in retrospect some wizards have cropped up here and there so I suppose that is a visual interpretation."

The album artwork, we are told, was designed by Prendergast with the Kraffics design collective and documents a rather odd love affair between a bear and a moose. Two fairly unlikely bedfellows.

The art from this project - including some of the artists involved - will take part in an exhibition for the single art later this month, one in London and one in Leeds. The London exhibition takes place on September 29 at the Lock Tavern and the Leeds one at Nation of Shopkeers two days before. You can view all of the submitted art work so far here. Each pre-order of the single gets a cartoon designed by Jo. An exclusive one.

And, returning to news on the album, Our First American Friends is due for release on October 12 through Hassle. Jo spoke about that, too.

"3 songs for the album were written a week before we begun recording, I was writing the lyrics whilst sitting on the District Line on the way to Hammersmith to record the vocals and we didn't have a clue who was going to be putting the record out when we were recording...So the process was quite turbulent but progressively constructive in uncovering how all three of us work well and not so well when under pressure. Dave ate too much bread. Expect to travel through time when listening to the album."

One thing we did forget to mention is that we'll be hosting the video exclusive for Tubelord's 'Propeller' later in the day. So stay tuned for that you wonderful people.