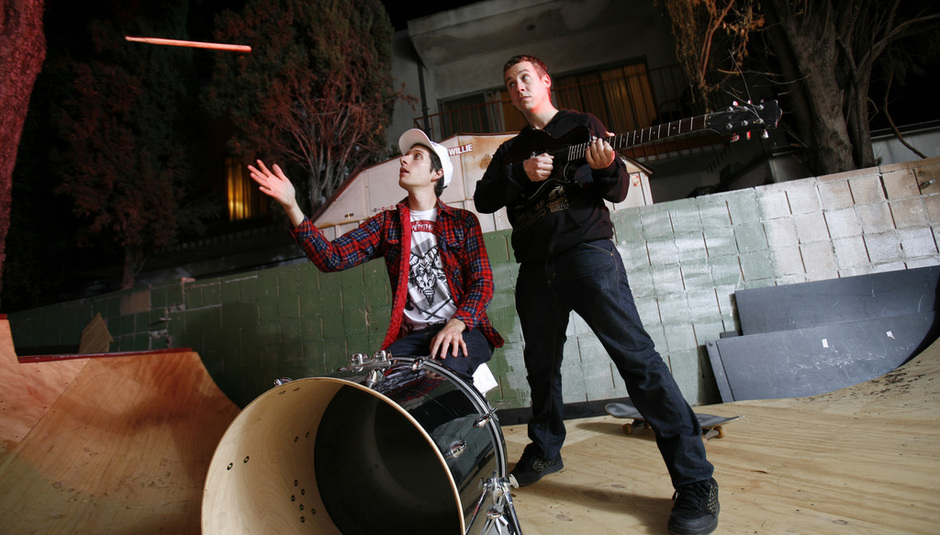 Another wonderful edition of this week's Spotifriday playlist featuring Bowie, Blake, No Age, Abe Vigoda, Dios, Max Richter, Andrew Bird...and, of course, a fair few more. Click here to listen to it. You know the procedure.

David Bowie needs no introduction. Which is why we're not going to give him one. I listened to some of his stand-up comedy this week, too. It was actually really funny. Should we be surprised by that? I don't know, but here is a review of the re-issued Station to Station. 9/10.

We've been waiting what seems like a very long time for Abe Vigoda to release their next record and now they finally have. It's called Crush and came out on Monday through Bella Union. It's also on Spotify but, y'know, buy it and that. We reviewed that record this week, too and the band also have a new video for single 'Throwing Shade'.

I don't know whether people see No Age as a very "DiS sort of band". They perhaps should do because they genuinely are one of our favourites of the last decade, which is exactly why we invited them to play one of our many birthday parties. That's going to be a good one. We also reviewed their new record, Everything In Between. Yeah, it's good.

Although the Manics returned this week with an album that wasn't massively praised by us, though hardly stated, there is also an extensive - as if you'd expect anything else - interview with the tallest member of the band (by about four feet) Nicky Wire, which you can read here. Again, it's very good.

'Woman Friend' seems like another way of saying...I don't know. Something platonic, I guess. The track itself has allusions to such a relationship. It's also being all bouncy and squiffy at the same time and, as a consequence, utterly enjoyable! It's not on the new record, but the review of said record can be read here.

This track is a little more laid-back, though. Again, Dungen's new one Skit I Allt is not yet available on Spotify, so we've chosen a track from the 2008 record, simply titled 4. Plinky perhaps, but never too plonky. We reviewed Skit I Allt here.

According to Oceansize's Twitter, this is the first record we've reviewed of theirs...ever. I find that hard to believe but if it is true then we apologise. Hopefully this 8/10 review of your new record will be enough to make up for it. If not, then I don't know what else we can do.

Following on from its maiden appearance on these here pages a few weeks ago, the Subliminal Transmissions column makes a triumphant return with edition number two. It is, as ever, insightful and a great read. Cast your eyes on it here. It has an interview with LHF and also a bit about James Blake. Cracking track from a cracking EP, this one.

Richie Hawtin is Plastikman as I'm sure you know. He played Bestival the other week, the review of which can be found here. His performance was described as blowing everything else out of the water, which is a positive indication.

Not that we really need to say it again, but Max Richter's Infra is one of the albums of the year. The solemn 'Journey 4' is the track we've used to show it here. He also played Cadogan Hall this time last week, a show which we reviewed.

That said, Gemini by Wild Nothing is also up there for album of the year contenders, should I have to say it so early. This track - and in particular the guitar tone - are perfect for a day like today; grey, miserable and dreary. Hopefully the shows that they've just announced will excite emotions a little more positive than that.

The Birdman, he who whistles. There are many nicknames for Andrew Bird, none of them all that great. In any case, he announced the release this week of an instrumental album. It's sort-of already been released already, as a bundle with Noble Beast, from which this track was taken. But not on its own.

Another super track from the super Dios album We Are Dios. Video for this particular track can be found here.

Click here to listen to this week Spotifriday playlist and here to browse through our archive.