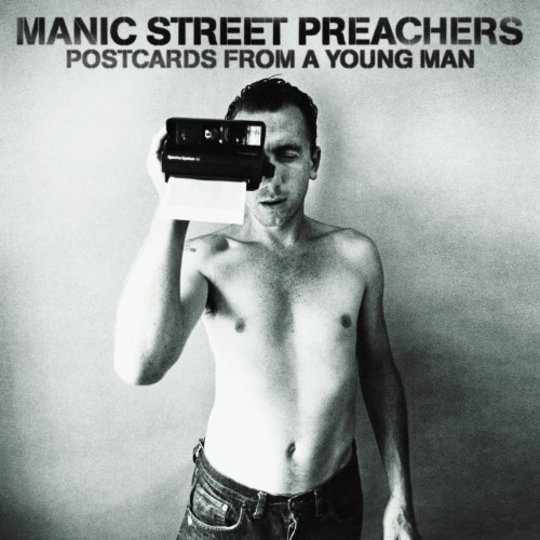 Fun as the self-mythologising and hyperbole and hoopla around the Manic Street Preachers always is, the trio’s better records have, ultimately, been able to speak for themselves, without Nicky Wire needing to do it for them. But self-mythologising and hyperbole and hoopla is what gets the Manics column inches these days, and Wire has already blithely labelled tenth album Postcards From A Young Man as ‘heavy metal Motown’, a hysterically misleading description that would be slightly funnier if you didn’t frequently wish that this was how it did sound. It’s also been billed as ‘a final attempt at mass communication’, a soundbite that’s perhaps equally inaccurate, albeit for more interesting reasons. On the one hand, nobody believes that the next Manics record is going to be some sort of unfathomably obtuse excursion in drindcore. On the other, the fact that Postcards... is for the most part a foray into Seventies-style AOR and power-pop (think: Supertramp, ELO) suggests that the band aren’t entirely serious about gunning for 2010 chart gold here.

ANYWAY. Perhaps the most musically emblematic track on Postcards... is ‘Some Kind of Nothingness’, a total curate’s egg of a song that features both a gospel choir (in one of four appearance) and Ian McCulloch. It's probable that discussion of the choir and smirking at the fact they got McCulloch to sing the repeat line "never stop" has already made for some nice interview soundbites. But fundamentally, it doesn't really work. McCulloch turns in a gorgeous performance - the line “this beauty feeling nothing at all” surely represents the highest scale he’s hit since 1987. But flinging the choir on top completely distracts from the guesting Bunnyman, while the languid underscoring of the choir's key line “Remember you stretched out in the sun, all alone forever, conclusions foregone” just draws attention to the fact that the song doesn't really have a very good chorus lyric. As with much of Postcards... first half, lots of elements of ‘Some Kind of Nothingness’ are interesting, but it's not really a truly satisfying piece of music.

For a band so obsessed with invoking their past, you do wish the Manics weren't so reluctant to throw in a bit of the old grit and ardour. It's a very nicely put together record, but there are moments so far away from the music that drew you to this band in the first place that you wonder if it’s wrong to question what you're actually doing here. Songs like ‘The Descent (Pages 1 & 2)’ are just so tame: I honestly doubt there’s a single Manics fan who’d think it anything less than an improvement if its cute, mannered violins were ditched in favour of a fuck off BADABAAAAAAAAAAAAA of guitar. And why can’t ‘Hazelton Avenue’ have balls? It would sound excellent with balls... instead the bit where James Dean Bradfield goes “oh oh oh, don’t need a wilderness” over a lush trellis of strings reminds me of the Lighthouse Family (nb it’s not as bad as the Lighthouse Family). These are still generally more worthwhile than the gloopy confections of Send Away the Tigers, but I can’t help but feel that Postcards...’s polished retro pop doesn’t ultimately play to the strong suits of a band who thrive on anger, anthems and the odd bit of absurdity.

There are places where it does all fall into place, notably lead single ‘(It’s Not War) Just the End of Love’. It’s slick as fuck, but once you’ve acclimatised to that, it binds together superbly: the bombastic string hook smacks home like a melodious harpoon, the hazy guitar line is just beautiful, and while some of the couplets are a little clunky, the lyric – which to me seems to be about the cold war disintegration of a marriage, though Wire has said otherwise – is a real grower; certainly the bit where Bradfield howls “it’s lost on me, I believe in revenge” is as quintessential a Manics moment as you could hope for.

But after that you have to pretty much skip to track seven, ‘Golden Platitudes’, to find a song where the words and the form and the performance all mesh into something that works. Do the gospel choir need to be trundled out again? No. But it’s the last time we hear from them, and they’re not really a distraction to a gracefully ascending ballad that shuns chirrupy hooks, concentrating on putting as affecting a set of words as Wire has bashed out in a while centre stage. “The liberal left destroyed every bit of my youth” sighs Bradfield, an older man's farewell to youthful arms.

Then, oddly, the prevailing aesthetic of Postcards...’s first half more or less drops away. The Bradfield-penned ‘I Think I Found It’ is very winsome - stripped down, nimble and with a bitchin’ harpsichord riff; ‘A Billion Balconies Facing the Sun’ has an air of off key menace and Bradfield’s most caustic fretwork on the record – presumably he didn’t want to look like a wuss in front of guest bassist Duff McKagan. ‘All We Make Is Entertainment’ rips off ‘More Than A Feeling’, which is never a bad thing, and again, there’s real fire in its belly. ‘The Future Has Been Here 4 Ever’ features a genuinely appealing Wire vocal that crackles softly about a sublime Sean Moore trumpet part. It’s a lovely, rough gem that makes you wonder why everything else has to be so polished. And the concluding ‘Don’t Be Evil’ offers a simple answer: it doesn’t. Taut, tart and with scratchy guitar at the fore, it basically sounds like a middle aged version of a Holy Bible track, but Postcards... could have done with a few more moments like this. “Oh don't be evil, just be corporate, and fool the world with your own importance” - I have a suspicion it’s about Simon Cowell, but if that’s what gets a rise from the Manics these days then I’m not complaining.