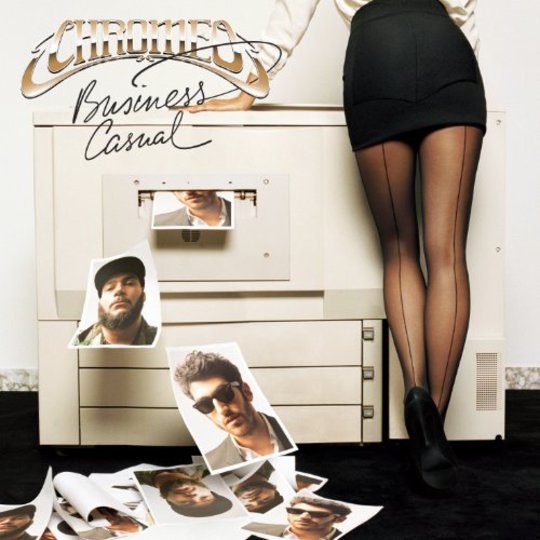 Three years on from their critically acclaimed Fancy Footwork, Dave-1 and P-Thugg have returned with Business Casual. Album three in Chromeo’s discography, it sees a return to the Eighties electro funk upon which they made their names, albeit stripped down slightly. As ever, the central theme of the album is the opposite sex. However where previous hit singles ‘Bonafied Lovin’, ‘Fancy Footwork’ and ‘Call Me Up’ displayed their Quebecois panache, wooing younger women and wowing them with their dance moves before taking them home and doing the dirty, _Business Casual+ is altogether more vulnerable and needy. The tracks off the album are unmistakeably Chromeo, with wailing synths, P-Thugg’s talk box and humour-tinged funky electro which masks the subject matter of the lyrics which seem to revolve largely around grovelling (‘I’m Not Contagious’), arguing over the demise of a relationship (‘Hot Mess’), proposing coitus as therapy (‘Night by Night’) and reminiscing over the end of said relationship (‘Don’t Turn the Lights On’). At no point do these apparent travails ever get them down, however, and the tracks on display are as fun, funny and as thoroughly danceable as any track they have ever produced.

Lead single, ‘Night by Night’ is far and away the most accomplished and catchy track on the album. It starts out like ‘Eye of the Tiger’, hook-driven from the start, with Dave’s vocals sliding in to a full blown funk fest. The wailing guitar, which mid-track explodes into a lip-biting riff, whirls around the chorus of “she says I’m not romantic/ I say she’s too dramatic/I tell her while we’re at we can work it night by night”. The track mirrors the overall trend of the record, which moves away slightly from the hip and more dance-y electro witnessed on Fancy Footwork into more instrumental driven funk.

The ability to be humorous while making good music is a rare one and one that Chromeo hold in abundance, making you smile without ever stepping into Flight of the Conchords or Tenacious D territory. In this vein, they are probably one of the only bands that could or would release an album where the opening two tracks are called ‘Hot Mess’ and ‘I’m Not Contagious’. The former begins with an English girl coldly stating, “You’re a hot mess/you act like you’ve got nothing to lose/but I’ve already lost my temper” before returning later in the track, in response to the lamenting “I need somebody, I need someone…I feel so lonely, I feel so numb”, stating “I don’t know what you want from me/I mean, I’m not a bloody social worker”. ‘Hot Mess’ and ‘Night by Night’ are easily on a par with the likes of ‘Fancy Footwork’ and ‘Bonafied Lovin’ and are both integral to one of the strongest starts to an album you are likely to hear this year.

In a way, Business Casual's sequencing mirrors a relationship. The first half of the album is as fun, sexy and contagious – despite Dave-1’s protestations – as any honeymoon period; however after track five of ten, ‘You Make it Rough’, the record starts to founder and becomes slightly bland. Not even the attempts of Beyoncé’s sister Solange Knowles in her guest appearance on ‘When the Night Falls’, or a re-iteration in French of the general theme of the album ‘J’ai Claqué La Porte’ (I slammed the door) manage to come anywhere near the bombastic success of the first five tracks. It is a pity really as by the closer, the Billy Ocean-tinged ‘Grow Up’, you are left with a residue of mediocrity – until that is you press play and start all over again.