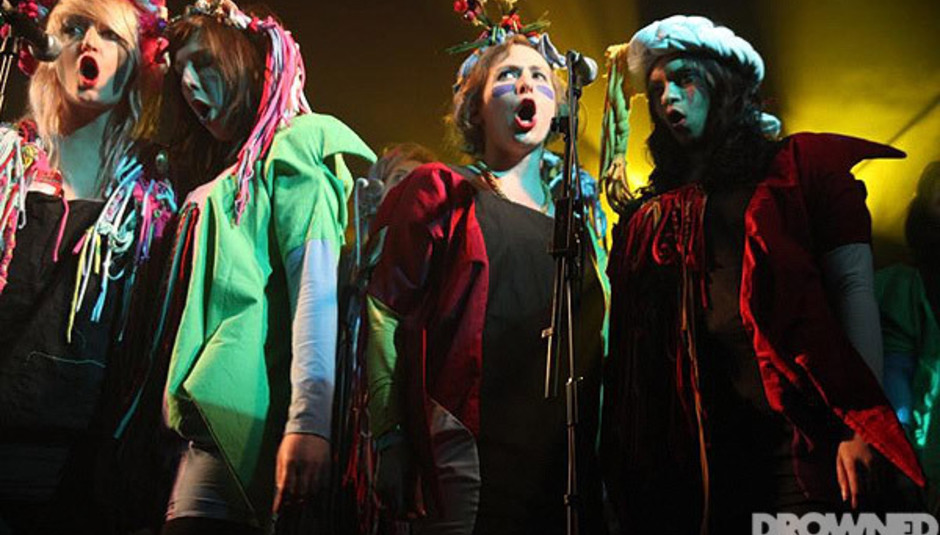 Another weekly instalment in our content-themed Spotify playlist, as ever on a Friday. Featuring: The Cure, Charlotte Gainsbourg, Gaggle, Stornoway, Slipknot, Slow Club, Klaxons, Cold Pumas, Rolo Tomassi and more.

Click here to listen to it and here to get Spotify for free.

The Cure's Disintegration was their latest record to get a re-issue, this time round in deluxe form. As is now the done thing. As he alluded to in his review, Tom Perry said many hundreds of thousands of words have been written about this record already. A few hundred more won't make much of a difference, then? Read it here.

Kevin EG Perry had the honour of meeting Charlotte Gainsbourg for a chat quite recently, and we published the results here, which also includes a competition to win tickets to her London show next month, so if you want some you know what to do, eh?

Slow Club decided to stick 'Willow Tree' - originally by Chad Vangaalen - as the b-side to the super infectious 'Giving Up On Love'. I'd say it was a wise decision. We gave away a special acoustic version of 'Willow Tree', recorded in a hotel room at this year's SXSW. Click here to hear and download it.

Grinderman. New record. Out in September. Tour dates announced. Celebrate that this week by listening to 'No Pussy Blues'. I still don't get the typewriter bit at the start. Is he writing a letter or something? Also, 'dandylions' doesn't rhyme with 'lines', Nick. Get it?

Another musician leaves this world, though one this time whose face we weren't too familiar with, given he wore a mask for much of his career. The Slipknot bassist Paul Gray was found dead in a hotel room earlier this week, aged just 38. Rest in peace.

Oh look! It's Male Bonding! Engaging in some male bonding. I could see how that would work as a concept for a video. Still, this track makes me want to actually be worse at guitar than I already am. That is no mean feat, people.

A double-dip helping of Rolo Tomassi this week, as we got excited about having the premiere of their new video for this very track, the up-and-down and all-around 'Party Wounds'. That can be viewed here. Then we reviewed their new record, Cosmology, scoring it a handsome and healthy 8 marks out of 10.

This one, on the other hand, makes me almost want to retain some degree of competency on the six-string. Or just be in Cold Pumas. As good as this track is, it's ripe for some of that 'interpretative' dancing that people I can't at all relate to engage in. Someone's probably already come up with some abstract movements for it, though. Listen and download their new single, 'Beat Mystery', here.

It's taken an unfathomably serious amount of time for Klaxons to release any new material, what with some of what they already recorded being apparently rejected by their label. The time has finally come, however, and we got to hear a new track by them this week, entitled 'Flashover'.

Unforch (this is a term now, right?) we don't have the Wonderswan single what Wendy Roby reviewed in her weekly singles column but we do have 'Hey Nature'. It's two minutes long, most of which is spent sounding similar to Pavement. Very likeable.

There was some disagreement, however mild, about the new Madvillain track this week. I, and another, said that it was frustratingly weirdly-synced, others disagreed. Either way I've listened to the track once and once only. "WON'T TAKE THE ONE WITH NO SKINNY LEGS, LIKE JOE TEX".

Roby writes the words so I don't have to: "‘Baby Lee’ you see, just simply exists - it is the kitten in the corner wanting to be played with and it’s so comfortable in its own skin there is little point in getting annoyed. And you might find yourself wanting to video that kitten playing a keyboard, you might then want to add some comedic, neon gifs and an ironically rubbish font and then go on Twitter and talk about how hilariously naive it is. But I shan’t be joining you." Single. Of. The. Week.

Some of you may be surprised that this band are still going. Well, they are. And they have a new album out. And it is, by our account, quite fucking good. Much like this track itself, though 'Monsieur C U Next Tuesday' should have been the title, clearly.

The record this title track is taken from got a whole 8/10 when reviewed by Neil Ashman, who said: "Cynics might argue about the familiar sounds on No Ghost and may perhaps point to the absence of anything truly experimental like the West African rhythms of their previous albums. What they lack in originality, however, The Acorn make up for in non-pretentious songcraft; dynamic arrangements, affecting melodies and harmonies and tasteful production. One of the most understated and, in all likelihood, underrated gems of the year so far."

The general consensus is that Oxford-based Stornoway (not actually from Stornoway, as you might think...) haven't surpassed the greatness of 'Zorbing' on their debut record, Beachcomber's Windowsill. That doesn't mean the record isn't any cop, mind, it's just that this song is so delightfully light and breezy that they set the bar so damn high.

Listening to one Gaggle song at a time is quite enough, thanks. Not because of the quality, just because it's an awful lot to take in and process, to even make a decision on. Not that you need to. You can envisage this track being used in a teen drama, maybe even Hollyoaks - right at the point where someone suffers a mental breakdown, possibly in a nightclub, possibly with DRUGS as a catalyst. I think the producers of the aforementioned 'oaks missed a trick with Elliott on this one. Read our interview with Gaggle here.

Click here to listen to this week's Spotifriday playlist and do likewise here to browse through our archives from the past year or so.