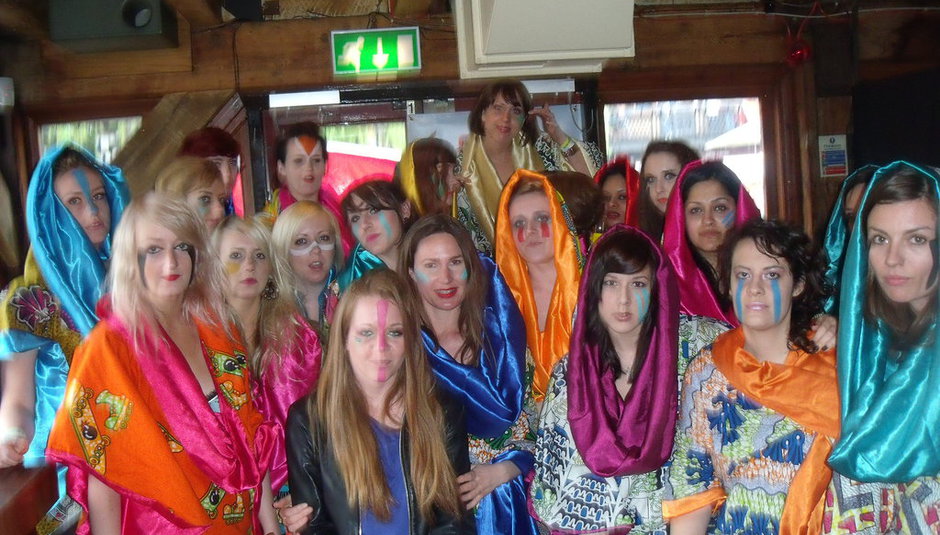 Unless you've been living under a rock somewhere on the outskirts of Darlington its very probable you'll already be aware of Gaggle, the twenty-three strong all-girl choir whose members go by such monikers as Wunderla, Namsoo and Gusset while sounding like a bastardised version of The Slits after a toga party round at the Polyphonic Spree's house. If you are one of the few still unaware, its a pretty strong guarantee you won't be come the end of the summer, as where ever there's a festival there's sure to be a Gaggle slot in there somewhere.

Formed at the back end of 2008 in London, Gaggle is the brainchild of former 586 duo (Debbie) Coughlin and Simon Dempsey (she conducts the "choir" from the front of the stage, he co-writes most of the songs alongside Ms Coughlin off it) and so far, their songs about cheating partners, liking cigarettes more than guitars and the smell of flies among other things have caused something of a kick up the backside to indie rock's stale four man band ethos.

DiS caught up with them in London recently, and found them a rather excitable and enthusiastic bunch with plenty to say, not least about the male dominated music industry...

DiS: Whose idea was it to create Gaggle and how did the band all get together?
Coughlin: I had an idea and got together with three friends who are MissMiss, Alibi, and Wunderla and we then had to work out how to get the right girls together to make the idea work. Gradually over the course of the year, we'd grown to nearly twenty-five members. We've recently recruited a drummer as well; she's amazing too, although she can't be here today.

DiS: Where did all the pseudonyms come from?
Coughlin: Everybody has a Gaggle name so that they can have separate identities both within and outside of the band. We all have day jobs and I'm not sure if everyone's employers or work colleagues know what else they get up to, so it suits us in that sense!

DiS: Who gets to choose your individual names?
Coughlin: Oh, all the girls get to choose their own names (cue laughter from all four corners of the room)...they'd probably kill me if they didn't!

DiS: What about the songs? How do you come up with the ideas and who puts everything together?
Coughlin: I write them with a guy called Simon Dempsey, who I used to play in the band 586 with a few years ago. The fact he's a bloke means no one will ever see him on stage but his contribution is vital to the band. We're the performers but he's one of the main orchestrators!

DiS: How do you manage to record all your individual parts? It must be a nightmare trying to fit twenty-three people into a studio!
Coughlin: We pick and choose...no, there are loads of different ways really. Sometimes we do it all as one massive group but most of the time we do it in smaller groups, because everyone sings their own parts, so its easier to do it that way and then just layer each person's vocals on top of each other.

DiS: Playing live must have its drawbacks too, particularly finding venues big enough to fit you all on one stage.
All: WE DON'T!!!

DiS: How long have you been performing as a live band?
Coughlin: Well we've only been together as the full Gaggle line-up just over six months but we first started performing about a year ago.

DiS: It must be difficult organising transport when you go on tour as well I guess?
Coughlin: Not really, we all just pile into the back of a big yellow van! No, its pretty uncomfortable but lots of fun.
Alibi: We need one with bunk beds in, even if they're really close together.
Coughlin: Just don't try and put us all in a Gaggle coffin instead!
Alibi: The biggest problem though, are riders. I don't think venues ever give us enough booze.
Coughlin: That's true! Everyone ends up fighting amongst themselves for half a can of beer.

DiS: Are you surprised at all the attention you've received so early on, particularly as most people won't actually have heard your music yet?
Coughlin: No! Why wouldn't anyone be interested in paying attention to twenty-three gorgeous girls!

DiS: Where do you see Gaggle a year from now?
Coughlin: I'd like to think we'll make some kind of impact. The music industry has been too male-orientated and dominated by men for so long now. We're just putting the finishing touches together on our album at the moment. I think there is a place for a group like ours, and even if we don't succeed with Gaggle, there's other projects that myself and various members are involved in besides. We're doing an opera with the Women's Institute called 'A Thousand Voices' which I'm quite proud about...we've just got a choreographer in for the live show as well...Sarah - sorry, I can't remember her Gaggle name - is doing all of our sound effects and chimes and that's sounding amazing, so at the moment we're concentrating on making Gaggle even bigger and better.

DiS: I've noticed you're doing pretty much every festival this summer...
Coughlin: All of them, bar Glastonbury, which is pretty upsetting actually. They literally said we couldn't play because there are too many of us, which is ridiculous.

DiS: Apart from the festivals, what other plans do you have for the rest of this year?
Coughlin: Completing the album and finishing the opera in the autumn first of all. We've got our biggest gig to date coming up next month at the Bush Hall, which is where all the choreography will come in, so we're learning to dance at the minute....or should that be schmise, where you just dance using your eyes?!? There's going to be a single coming out as well...we're not sure what that will be yet, but we are working on a lot of new material so by the time the album comes out a lot of what we've been playing previously will no longer form part of the set. And we want free shoes. And a new tour bus!

Gaggle can be seen at the following venues:-

For more information on Gaggle visit their MYSPACE