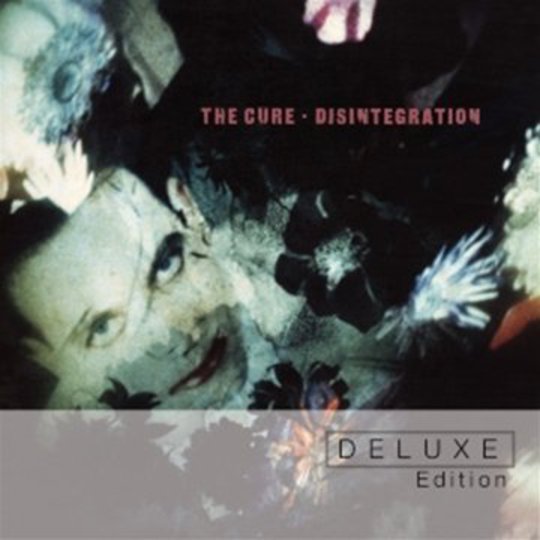 It's hard to imagine a universe without The Cure in it. The Eighties may as well not have gotten out of bed without them there, and their influence even 20 or so years since their prime period is incalculable. How many of the bands that they've inspired have gone on to influence others? How many dull Christmases have been enlivened by going through photo albums and spotting an uncle's hairstyle tribute to Robert Smith?

Bizarrely Disintegration, now deeply entrenched in the alternative canon was an album delivered under big pressure. Kiss Me, Kiss Me, Kiss Me had done very well, giving them their first big US success after years of critical adulation by the UK press. The band were in a difficult position then, relatively clean after many years of hard drinking, without a talisman of past years. Lol Tolhurst, increasingly a bit player and sidelined by boozing got the boot, and Roger O'Donnell entered the fold. Disintegration shows the work of a reinvigorated Cure fully prepared to come back bigger and better from the brink. O' Donnell's keyboard work is one of the big improvements from Kiss Me..., which was a great, if messily sequenced record; his keyboard washes adding depth and grandeur to the slower moments. 'Plainsong' is dominated by him, and must surely rate as one of the best opening tracks of all time. As a song it's a statement of intent, widescreen and epic in every sense; those keys supporting languid guitar lines and Smith's vocals heavy with portent and delay. The Cure had tended to open their records very strongly up to this point, with 'The Kiss', 'Inbetween Days' and 'One Hundred Years' being highlights of their canon. 'Plainsong' blows all of them out of the water, and despite Smith's later mumblings of being unhappy being a stadium band, seems written to be performed in them.

As their sense of scale increased, their pop aspect was, if not completely phased out, almost muted. On first listen 'Lovesong' is the only genuine pop single, but even then it's hammocked by 'Closedown' and 'Last Dance', two of the most melancholic offerings here. You can hear Smith's fears about the band and his own creative ability on the former, where he is "running out of time, I'm out of step and closing down". On the latter he's almost drowning in pathos, a crumbling patriarch recalling past love. Between those two 'Lovesong' sounds heroically optimistic, but even then the love is tempered with realism. "However far away, I will always love you... whatever words I say, I will always love you". You can hear the joy of 'Lovesong' in the too-brief guitar solo, Smith flying to the moon yet again with clear, clean, simplistic notes burning in an intricate pattern.

So far, so obvious then. Disintegration is a classic album full of songs that have had thousands of words written about them already. If you don't own it, you should go to the shop and buy a copy. That's the simple part. But should you buy this 'Deluxe' edition? Probably not, if you own a copy of the original. The remaster doesn't improve the sound dramatically, and the second disc is mostly instrumental and demo takes. Listen once and forget, apart from the excellent cover of 'Pirate Ships', originally by Wendy Waldman. Found in a box of demos in a garage and later posted online by Smith around the time they were touring Bloodflowers, it's a slice of sea-faring folk that wouldn't have fitted on the album proper, although it fits nicely with the general lyrical themes of loss and distance. That song has been available for a long time though, and the previously unreleased tag seems to ring a little hollow here.

The real come on for Cure fans is Entreat Plus, the deluxe version of the Entreat live record that is disc three. Their first decently recorded live album, a document of a 1989 Wembley Arena show, Entreat hasn't aged as well as I'd have hoped. The songs originally omitted don't help, either; 'Plainsong' is leaden compared to the studio version, and terrifyingly opens with a big Eighties guitar sound that sounds a bit like someone hammering out the Top Gun theme. 'Lovesong' takes a bit of a kicking too, the bass sounding a little off, like it's still set to 'At Night'. 'Lullaby' is a good reading, but isn't essential or as good as the version they later released on their double disc live set, Show. In fact, compared to Show, Entreat Plus is flat footed, and sounds a little too close to a live studio album for comfort. So while the bonus discs may become collectible in time, unless you buy records to accumulate wealth, they're bonus extras you can live without. There will be a cheaper, single disc edition of this album within a year. That album is a 10 in anyone's language. This over-fluffed deluxe edition is only an...