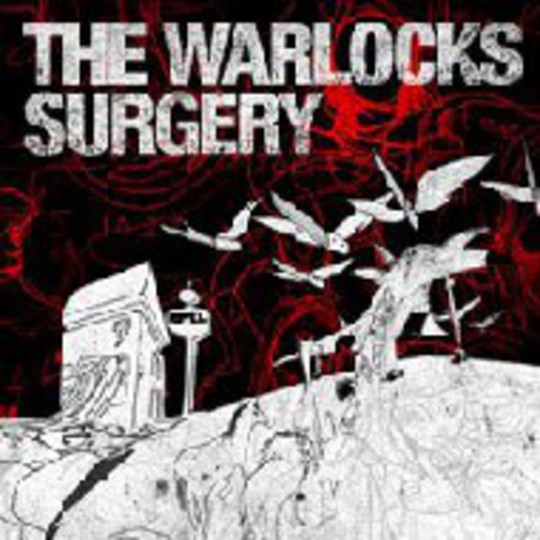 If the myths around The Warlocks are true - and this record suggests they most probably are - then this octet's life of chemical fuelled debauchery makes people like Pete Doherty look like cast-offs from Channel 4's 'Faking It'. For real? You bet they are.

Two years ago when the mighty 'Phoenix' was unleashed, the rest of the world was engulfed in amphetamine charged Strokes-mania or mogadon based Coldplayisms. The fact that a group of artists had made a record whilst almost exclusively indulging in a diet of class As and celebrating the fact should have ended with disastrous results. That it was quite the opposite wasn't so much an achievement, but more of a testament to the fact that the Warlocks were quite possibly the first band to take Sonic Boom's old adage of "Taking drugs to make music to take drugs to..." and use it as a blueprint so convincingly.

After the excess of 'Phoenix' though, comes the inevitable crash. Throughout the eleven songs on 'Surgery', each one provides a document to the whats, wheres and whys the Warlocks have been up to for the past couple of years and yet despite the obvious personal traumas ('Come Save Us', 'Suicide Note', 'It's Just Like Surgery' to name but three), 'Surgery' isn't the unlistenable, depression-fest it's lyrical content threatens it to be. Instead, it's heartfelt message combined with the monstrous sound behind it make it one of the most curiously uplifting records of the year.

Although they've enlisted the services of Beck and Badly Drawn Boy producer Tom Rothrock on this record, the band's sound is anything but watered down, instead mixing their trademark repetitive drones with a more opulent fervour usually reserved for stadium rock carnivores like Black Sabbath and Iron Maiden. This means that the bevelled sub-Mary Chain blitz of 'Angels In Heaven, Angels In Hell' now resembles a maelstrom from the most westernly confines of heaven, while title track 'It's Just Like Surgery' literally begs to explode at least half a dozen times precisely where the chorus ends.

Lyrically, main man Bobby Hecksher appears to have used this record as an almost open apology to all and sundry about their drug-induced lifestyles. "Come save us from ourselves..." is the opening couplet on the record and by the time you've reached 'The Tangent', where Hecksher insists "I got so sick that the nurses have all quit" or the poignant 'Suicide Note', where he pleads "I'm too weak to live, to weak to care...", 'Surgery' really does resemble a public airing of someone's most private moments. Adrian Mole this most definitely isn't.

'Bleed Without You Babe' at first sounds like a straightforward love song for a partner who's upped and left, but on closer inspection it appears that companion may be more substance based than soulmate, while 'Evil Eyes Again' - basically the Ramones on smack rather than speed - is a tale of hallucinatory fear after one too many hits of the brown stuff.

Occasionally the mood rises above self-deprecating regret ('We Need Starpower') but on the whole, 'Surgery' is the best advert to induce "the kids" into saying no than the Carlish/Doherty double act could ever conjure up.