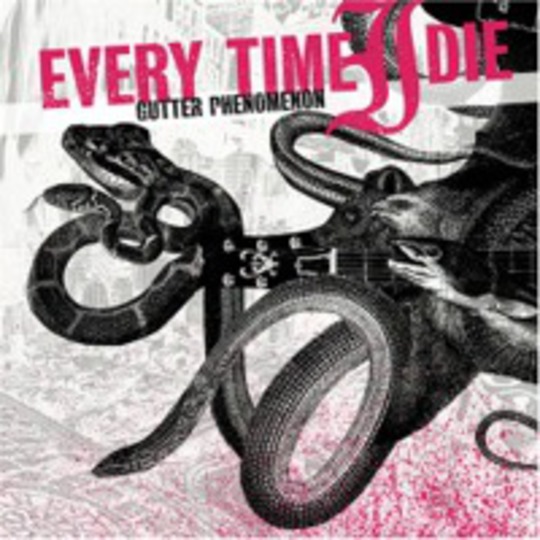 *Every Time I Die * have returned with their third album, primed with vocal coaching for their stomping hardcore plunder.

_Gutter Phenomenon _features their trademark swinging jackhammer guitars that pummel away frantically with distorted staccato riffs over jazzed up drum rhythms, but now Keith Buckley’s often overpowering scream has been tamed by his desire for vocal coaching. Having slowly veered from their darkened ways over the years this is clearly ETID’s most accessible record, helped along by cameo appearances by apparent brothers-in-arms *Daryl Palumbo *of the seemingly defunct Glassjaw and *Gerard Way *of the, currently not defunct at all, My Chemical Romance.

Even Hot Damn! had a cleaner sound than their previous grittier offerings and enough harmonies and handclaps for even the most hardened emo kid to take note of. This progression has, of course, led to more singing and even more complex harmonies, mainly at the expense of the rawer qualities of Buckley’s screaming. This album has many more ‘rock’ influences in it than previous releases but while it always seemed like something new before there is an underlying sense that some tracks on _Gutter Phenomenon _were just off-cuts from the cutting edge hardcore of their last album.

This conservative effort will probably benefit hugely from having emo heroes guesting on it. It will benefit even more from having sharp and nifty refrains such as: “Hey there, girls! I’m a cunt!” They will _all _be singing it without the knowledge of how good this band used to be.