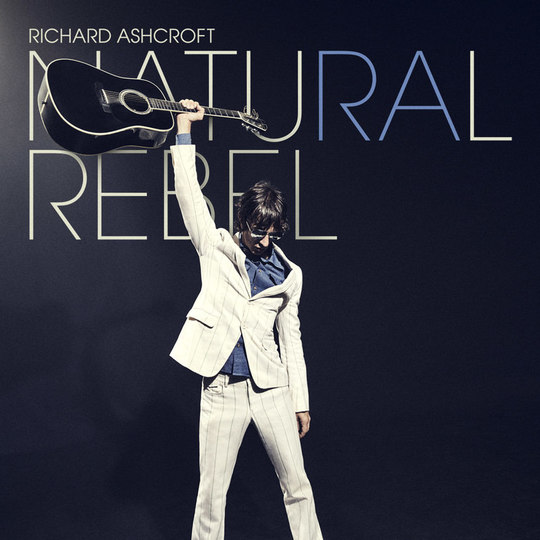 ‘This album is dedicated to you the listener,’ screams the inside cover of Natural Rebel, the fifth solo album from Richard Ashcroft. However, the burning question here is whether anyone will want to listen to this again after hearing it once.

In many ways Ashcroft has become an easy target for ridicule, not helped by occasionally bizarre posts on social media and a recent appearance on Sky TV's Soccer AM where an inconspicuous looking plastic sachet seemingly fell out of his trousers. Musically, Richard Ashcroft the solo artist is a million miles away from the ‘Mad Richard’ whose on-stage performances with the pre-‘The’ Verve saw them labelled the most exciting new band in the UK while blowing the likes of Billy Corgan and Smashing Pumpkins off stage every night on the Siamese Dream tour (trust me, they did).

Of course middle age, parenthood and the responsibilities that come with it are bound to take their toll, but it's not unfair to suggest Ashcroft has been dawdling in the middle of the road for some time. Two decades to be precise, as even The Verve's breakthrough record Urban Hymns contained a few moments that suggested he was heading in a different place altogether from the one in which that band first started. There have been occasional moments during his solo career where the spark has been reignited and passion rekindled, but they've been very few and far between. Almost to the point where the announcement of a new Richard Ashcroft album is greeted with a swift shrug of the shoulders rather than gleeful shriek of excitement.

So it shouldn't come as any surprise that Natural Rebel plays it safe from beginning to end. Pedestrian musical arrangements linger throughout, while Ashcroft's vocal, which once soared and demanded your attention, sounds languid and forced to the point where one is left wondering if he can muster up any will power himself to sing what are by and large, trite soundbites that could have been written on any number of post-it notes.

His main source of inspiration here appears to be spouse Kate Radley, and on songs like 'All My Dreams' and 'That's How Strong', Ashcroft makes no secret of the admiration he has for his partner. Which of course, is no bad thing. But then it's not really about what you say but more how you say it, and Natural Rebel contains more clichés than you can shake a stick at. "If you're singing with me, then I'm singing with you" he sings on 'That's How I Feel It', while declaring "I'm born to sing" on 'We All Bleed', one of the few pieces here that doesn't make you want to press the fast forward button before the first chorus.

The one dimensional pace omnipresent throughout Natural Rebel doesn't help matters, and by the time it does pick up on closing number 'Money Money', a close descendant of 2000's 'Money To Burn' that's heavily inspired by Let It Bleed era Rolling Stones, interest has waned to the point of no return. Which is a crying shame when all's said and done, because despite Natural Rebel's many flaws, Ashcroft's legacy as a distinguished songwriter of some repute remains. Even if his most distinguished works are confined to the past.

Nevertheless, in an era where the likes of Idles and Sleaford Mods (whose frontman is actually a year older than Ashcroft) are kicking up a storm against the political and social injustice that surrounds them, there's never been a less appropriate time to say nothing than the present. Sadly, Natural Rebel oozes magnolia from every pore, and in the current climate that simply won't do.