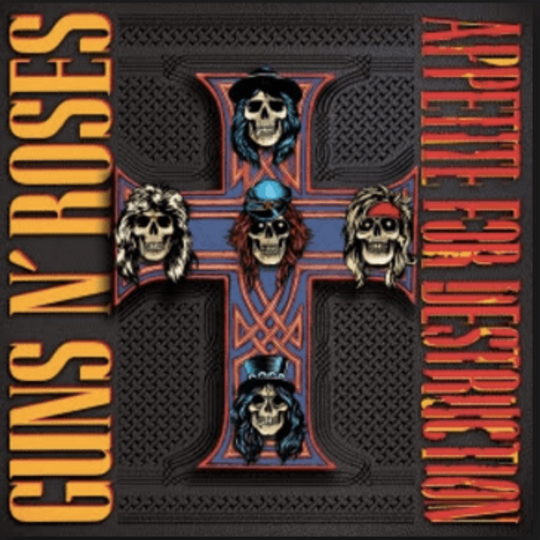 There are several moments during Guns N’ Roses recent Download Festival appearance where the phrase ’The Most Dangerous Band In The World‘ pops into your head. Not because it’s apt, but because it’s hard to square that much-touted tagline with what you’re seeing – a three-hour plus set overblown with classic rock covers, fronted by a rock n’ roll Liberace, rings dripping from his fingers, fringed jackets swapped every three songs. But every once in a while, just for a few seconds, the polished surface cracks and you get a glimpse of the exhilarating scum underneath. A reminder of the band this once was. Every time that happens, without fail, it’s during a song from Appetite For Destruction.

When GN’R crawled out of Hollywood in the mid Eighties they were fucking feral. Penniless gutter rats, three of them strung out on smack, all of them boozehounds, all of them messed up in some way. In LA’s thriving glam scene, amid the pretty-boys of Poison, Mötley Crüe, Ratt and Great White, GN’R were from another, scuzzier planet. They lived together in a disintegrating warehouse rehearsal space with one bed (when they weren’t dossing on the couch of whichever stripper would have them), playing host to every clocked-off sex worker and clonked-out junky on the strip, bonded together as proud members of Hollywood’s scuttling underbelly. If you’d told anyone then that Axl Rose would front an entirely new Guns N’ Roses for most of the Noughties, they’d have presumed it was because because Slash, Duff McKagan, Izzy Stradlin and Steven Adler had all fucking died. All four came dangerously close.

From the very beginning GN’R were a rare real-deal in rock n’ roll. A perfect storm of punk, metal and sleaze-rock with an unexpected sideline in epic ballads. A melting pot of the Sex Pistols, the New York Dolls, Aerosmith, the Rolling Stones and Queen. Axl’s grandiosity and unique screech was tethered by McKagan’s DIY punk ideology and punchy bass runs, and the scattergun swing-and-push rhythms of Adler and Stradlin. The whole thing was lifted by Slash, a virtuoso guitarist whose bluesy riffs, emotive solos and natty top hat made him a genuinely iconic presence. They looked wasted, grubby and mean. They could tear your face off with feedback and yet – were capable of writing ballads like ‘Don’t Cry’ and ‘November Rain’ before they’d ever set foot in a studio. They may have become a soap opera, then a self-parody and eventually a nice, safe, classic rock headliner, but back in 1987 they earned that Most Dangerous… tag.

Appetite for Destruction, their three-decade-old debut was the perfect representation of that band. You can taste the scum. It’s up there with Nevermind The Bollocks, Aerosmith’s Toys In The Attic and the Stones’ Beggars Banquet in the list of consummate, effortlessly raunchy, fuck-you rock classics. An album that seeps character like pus, has a chemistry that is 99 percent Jack Daniels and builds its riffs from splintered bone. It is a fucking great album. From ‘Welcome To The Jungle’’s snapshot of seedy-af LA life, to the loping groove of ‘Rocket Queen’ which merges Slash’s bottleneck solo with the actual sound of Axl Rose literally making Steven Alder’s girlfriend cum, Appetite… wears its defibrillated heart on its sleeve. The fact that everyone present (Adler wasn’t there, funnily enough), including the woman involved, thought recording the most listened-to orgasm in history a perfectly reasonable thing to do, says everything about Guns N’ Roses at the time. Their behaviour was often questionable, their sexual politics problematic (check the lyrics to ‘It’s So Easy’) and their substance issues completely off the scale, but there’s something utterly enthralling about a band who lived their image IRL, and channelled it with real accuracy and skill into their music, (genital) warts and all.

(Side note: Adriana Smith - the rocket queen in question - maintained her friendship with the band, is still in touch with Slash and 30 years later is happy to tell the story. It’s an important detail. They were feral, but they weren’t monsters).

There’s real magic in this album. One guitar in each speaker, Stradlin's jittery rhythms dancing around Slash’s power-drill riffs and breezy, bluesy solos. Adler and McKagan playing with rock n’ roll swing and punk rock punch respectively, Rose’s howl rising over the whole thing. Great hooks, huge choruses, proper fuck-you energy. The band had sat on these songs for years, honing them down to the leanest they could be, living in each other’s pockets with a guitar and a bottle of Jack always in hand. The demos present on this expanded edition show how fully formed the songs from Appetite… were, years before they made it out into the world.

All is not quite what it seems, though. In the centre of all the debauchery and dirt you get ‘Sweet Child O’ Mine’, probably GN’R’s most enduring entry into the classic-rock canon. It’s a song with genuine tenderness and timeless potential, and these lice-ridden fuck-ups would never have pulled off if that’s all there was too them. It’s so perfect, it almost spoils the party. There were always clues that the gutter-snipe phase might one day pass – right off the bat they had ‘Move To The City’ a proper brass-driven Stonesy party-piece, more melodic and accessible than most of Appetite…. They cannily kept back ‘November Rain’ for another four years, reasoning a ten-minute epic wouldn’t fit their image just yet. It shows more smarts and long-term ambition than they’d have you believe at the time. The street urchins would evolve into stadium-bestriding monsters on the Use Your Illusion albums, and the clues were there all along. You almost feel cheated.

Thirty years later and Appetite For Destruction still packs a visceral thrill; a combination of real attitude and proper songcraft that very few bands, if any, have ever combined so perfectly. Repackaged handsomely with dozens of bonus tracks, promoted by entertaining but ultimately safe mega-gigs and probably best remembered for a power ballad; never forget that under all the polish is authentic Hollywood dirt. And that is why you should cherish it.