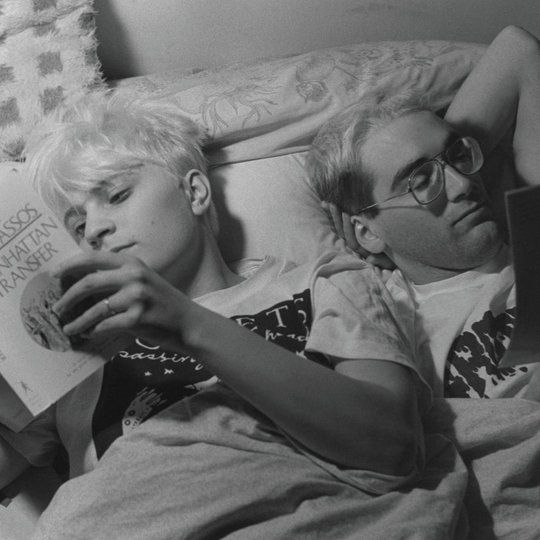 Ageing is an inevitable process, but the ways in which we adapt to it is completely individual. At least, that seems the primary concern of Self Defense Family frontman Patrick Kinlon's on their latest record, the excellently titled Have You Considered Punk Music?. The question in the album title is, sort of, addressed in the song of the same name, expressing how punk music is Kinlon and many others' way of life, even if the snot-nosed idealism of the youth culture has long since passed. Kinlon then completely flips the question on its head only a song later on 'Have You Considered Anything Else?' in which he describes his current relationship through the music each of them listen to and how it shapes their compatibility as a couple.

Welcome to the mind and heart of one of rock's most engaging frontmen. And it is not just Kinlon who is considering this process, as the whole band - largely led by lead guitarist Andrew Duggan - equally, consider how long they've been making music together with this being the band's most "adult" sounding record to date. For the uninitiated, SDF started as End of a Year in 2003, a youthful but inventive post-hardcore band, releasing three albums under that name. However, in 2011 they began to morph into a much bigger family, one that includes members on both sides of the pond, and with it an expanded sound that moved away from straight the more aggressive hardcore of their youth. SDF's last album, 2015's Heaven is Earth is an incredibly underrated sleeping giant of a record, with a beast of a title track that proved they could no longer be defined by a single, easy genre category.

In the interim, the band's single and EP releases have increasingly suggested a further move away from the distortion-laden sounds of their humble beginnings and when the aforementioned title track was released as the album's lead single, it all but confirmed this theory. Have You Considered… sees the band push themselves further as musicians - and in Kinlon's case, as a frontman with an increasingly impressive range - without relying on the easier tropes of their genre's background (i.e, distortion). Instead, the record utilises one of the band's best qualities, the ability to make the listener feel transfixed on their endlessly hypnotic nature, and stretch it out for a frankly put, sumptuous 40 minutes of borderline post-rock music.

The album's opener, 'The Supremacy of Artistic Feeling', for instance, is an absolute stunner. Kinlon discusses important women in his life and the kind of toxic masculinity he's been considering in his lyrics for years, before halfway through his voice suddenly rises about his default spoken word setting and completely blows the track apart; it is quite the thrill. Meanwhile, the band behind his carves out a mesmerising track, proving that despite his hardcore background, Duggan is one of indie rock's most innovative guitarists. Later on, on 'Nobody Who Matters Cares' they practically crack the SDF equivalent of a pop song, despite undercutting it with Kinlon's sardonic wit with the beautiful refrain "hard to sing songs/that people love/about people in love" worming its way into one's brain instantly.

This is a brilliant, understated, wonderfully crafted record from a band who it feels have been building up to this moment their entire careers. In the past, some may have been put off by the distortion and Kinlon's unique vocal style, but the band have overcome these queries masterfully to produce a record that could see them finally gain an audience beyond their punk background. On the finale 'The Right Kind of Adult' both the band and Kinlon expertly sum up the album's musical and lyrical themes on an atmospheric, four-minute krautrock track, featuring mandolins reminiscent of that R.E.M song - a band who also spent a great deal of time considering life's big questions. While SDF will almost certainly never grow to the size of that band, it is time to start paying them their dues as one of the most exciting acts around today.