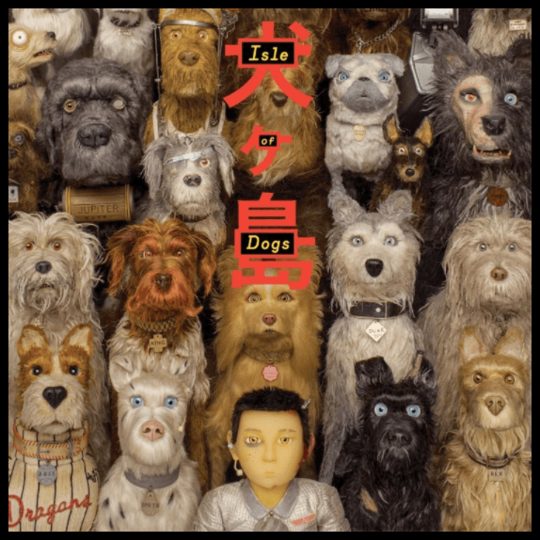 Wes Anderson doesn’t do anything by accident, but Isle of Dogs takes his penchant for perfectionism to another level entirely.

That was always bound to be the case once he made clear that his next film was to be a stop-motion animation, and sure enough, it’s turned out to be a pain-staking paean to what’s possible when you have apparently limitless patience (as well as the fact that, given that his name has now long been a byword for cinematic quirk, he’s readily able to indulge his every whim). The movie is a symphony in close detail, from the incongruities of the eponymous canines’ fur to a wince-inducing kidney transplant scene and a similarly visceral detour involving sushi preparation. It’s been amusing to see pretty much every member of the ensemble voice cast who’s been quizzed on the film’s stunning visual realism reply with words to the effect of “I couldn’t believe it either”; they all recorded their work for the film two years ago in a handful of days apiece, and didn’t get to see the finished product much sooner than the rest of us did.

Anderson’s always paid similarly intense attention to the sound design and the soundtracks of his movies, but in the case of Isle of Dogs, there’s a feeling that perhaps the score might have more of the heavy lifting to do than usual. That’s because the general thrust of the storyline is as warm as the frame-by-frame construction of the world in which it takes place is cold and calculated - there’s the opportunity for the music to help bridge those two opposing factors.

The film follows Japanese schoolboy Atari Kobayashi (Koyu Rankin), who travels to the titular island, a rubbish dump, when dogs are exiled to it by his dictatorial Uncle (Kunichi Nomura), who, as the mayor of the fictional Megasaki City, banishes dogs out of fears that an outbreak of snout fever might become a cross-species concern. A pack of self-styled 'scary, indestructible alpha dogs' led by Bryan Cranston’s uncompromising stray Chief resolve to help Atari find his own deported pet, whilst Greta Gerwig’s exchange student, Tracy, spearheads the pro-dog resistance back in Megasaki. Never let it be said that Anderson’s the kind of filmmaker to go against type.

Seasoned composer Alexandre Desplat won his first Oscar for this work on The Grand Budapest Hotel, so it’s not surprise to see him return to collaborate with Anderson again here. Incidentally, his second statuette came last month for The Shape of Water, a film that, despite the weirdness of its central conceit, shone with Golden Age gloss both visually and in terms of its classically romantic score. All of which is to say that Desplat’s a musician firmly rooted in Hollywood tradition and, accordingly, him taking on a film set in Japan potentially opens him up to the same traps of cultural appropriation that some feel that Isle of Dogs more generally has fallen into.

Those who have defended Anderson against those accusations have pointed to the homages that he’s included to Japanese directors he admires, particularly Akira Kurosawa, and the soundtrack to the film might be their strongest evidential weapon in that respect. If The Seven Samurai’s well-worn ‘Kanbei & Katsushiro—Kikuchiyo’s Mambo’ was ever going to sound fresh again, it was in a film about talking dogs, and sure enough it feels like a heartfelt tip of the hat rather than a superficial inclusion.

The same applies to the subtle, Spanish-inflected guitar of ‘Kosame No Oka’, from Kurosawa’s 1948 Yakuza drama Drunken Angel.

Desplat’s work, meanwhile, leans very heavily on taiko drumming. What the percussion is accompanied by usually helps sort that section of the score into one of two categories - either ominous, when it’s joined by deep chanting and low strings, or mischievous, which tends to involve lighter swells of brass (see ‘First Crash-Landing’ or ‘First Bath of a Stray Dog’.) Crucial to the sense of balance in the film, meanwhile, is the inclusion of the decidedly Anderson ‘I Won’t Hurt You’, a low-key psych-pop song from Sixties genre-straddlers The West Coast Pop Art Experimental Band. It pops up as a recurring motif as the dogs journey across the island, and serves as a low-key lyrical reminder of the film’s central theme of compassion.

Isle of Dogs’ narrative is as carefully controlled as its technical achievements and there’s therefore deeper meaning to be uncovered if the viewer wants to go looking for it; there’s certainly something allegorical in what the film says about fear of the other as a useful political tool. It is also, though, a story about a boy and his dog, told through Anderson’s intensely idiosyncratic lens, and Desplat’s music - under the watchful eye of, and with telling contributions from, Anderson himself - captures both the light and dark of the piece in assured, if not unforgettable, fashion.