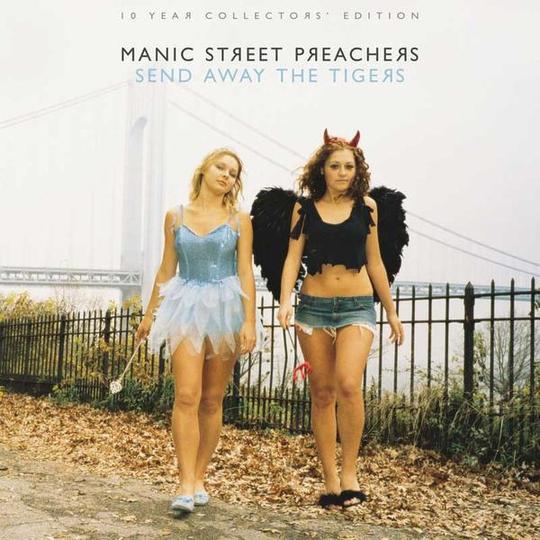 'It should sound like Guns N Roses covering "All You Need Is Love"' said Nicky Wire, Manic Street Preachers’ bass player and head propagandist, of 2007’s Send Away The Tigers. The idea sounds bolshy, a bit mad and, if we’re honest, like it might not quite work. And that, in fairness, is Send Away The Tigers all over. The eighth Manics album is sticky with self confidence, its’ brashness posted on every big Marshall-stacked chorus, every widdley-widdley solo. It’s the most melodically assured they’ve been since Everything Must Go, over a decade earlier, and the most preposterously, brattily care-free they’ve sounded since their very earliest days.

That ...Tigers gets the tenth-anniversary treatment at all is a bit odd. It’s neither as beloved by fans as Gold Against the Soul nor as successful as the mega-selling This Is My Truth Tell Me Yours, both of which passed significant anniversaries without deluxe reissues. Box-sets of either would probably sell better. So why this album? Why would the band regard it so highly?

Manic Street Preachers 'Your Love Alone Is Not Enough' from HLA on Vimeo.


The first decade of the twenty-first century was an odd one for the Manic Street Preachers. The Nineties had seen them climb to the very summit of British rock success. Their ascent was capped by a New Years’ Eve stadium gig in Cardiff, partying with 70,000 fans like it was because it was 1999. A one-off single, the bolshy ‘Masses Against The Classes’ was the first number one of the new millennium. It was also the band's last. They would never be that big again. The new decade saw them skiing down the other side of the slope at speed, deliberately sabotaging their own mass-appeal as they went. In 2001 they released two simultaneous singles, dividing sales and ensuring neither could hit number one. They followed those with Know Your Enemy, an album of awkward rock songs and uncompromising pop, with little sign of the lush anthems that had bagged them Brit Awards and platinum discs. They launched the new era by flying to Cuba and playing for Fidel Castro. The Manics-fan hardcore were delighted, but the man in Tesco was already eyeing up the new Coldplay album. By 2004’s Lifeblood, a record of 'elegiac pop' totally at odds with an indie scene in love with the Libertines, the band could only fill an arena tour by roping in the ascending Razorlight as support. Some in attendance (idiots, admittedly) probably felt the bill was the wrong way around. After their poorest selling album to date the band licked their wounds and started solo careers. Fans began to worry Manic Street Preachers had ran their course.

And then came Send Away The Tigers. That’s where the descent started to slow. Where the metamorphosis from 'one of those Nineties bands' to Britrock’s elder statesmen began. When they became, in the beautifying eyes of the NME, actual Godlike Geniuses. The bullish confidence came from a bonafide hit single in ‘Your Love Alone (Is Not Enough)’, a catchy-as-hell sing-along, featuring The Cardigans’ Nina Persson. ‘Your Love Alone…’ is a sparkling pop slice, the type of thing the Stereophonics made millions off, only with (much) better words. It was the most accessible Manics single in a decade, and what’s more it sounded like a hit. It put a smile on your face; a proper jukebox record. That confidence infected the resulting album. Tigers had a clear agenda: be upbeat, be carefree, be for everyone. The politicised, tongue-twister lyrics were still there, but they were born aloft on those big slabs of melody, where previously they might obscure them. This was classic-sounding Manic Street Preachers.

But there’s a huge gap between 'classic-sounding' and 'classic'. Send Away The Tigers is a good Manics album, but it’s not a great one. For every solid-gold anthem, ‘Your Love Alone…’ or ‘Autumn Song’, there’s something throwaway and awkward; the mildly irritating ‘Rendition’, or the so-so rockism of the title track. It’s a record that relies more on flash and bang than on substance, which is a criticism not levelled at MSP since Gold Against the Soul (an album the band practically disowns). ‘Imperial Bodybags’ has a satisfying rock gallop, and ‘The Second Great Depression’ hides some pain behind its punch; but elsewhere? ‘Winterlovers’, despite a rather lovely melodic bass solo (!) is thin gruel, and ‘Underdogs’ so Manics-by-numbers the band have erased it from history, dropping it entirely from the reissue. It doesn’t even show up on the b-sides disc. It’s replacement, ‘Welcome To The Dead Zone’, rescued from b-side obscurity, adds some much needed sepia to the brash tones.

The bonus disc accompanying the re-release tells a similar story. A bombastic cover of Rihanna’s ‘Umbrella’, and a full on, sax-drenched glam rock Christmas song are not the products of a band on the wane - this is the 'just for the hell of it' behaviour of a group enjoying themselves. That said, the really interesting moments are hanging around further down the tracklisting, where a much darker, sadder, record is lurking in the b-sides. Tracks like ‘Lady Lazarus’, the acoustic ‘1404’ or the rich, inward looking ‘Fearless Punk Ballad’ tell a different, and more reliably 'Manics' story. You can see why they were overlooked for the zip and zing of ‘I’m Just a Patsy’ and ‘Underdogs’, this is a record that needed to show its teeth. It needed Nicky Wire’s big, sharky grin, not his fears and regrets. The band had to put on a show. We, and they, had to know they were still wanted.

That confidence was justified too: ...Tigers was a big hit, going gold and being kept from the number one position by less than a thousand sales. It proved the Manics still had clout, that they still had relevance. Their next album, 2009’s Journal For Plague Lovers, sealed the deal- highlighting that they were still capable of being fascinating, compelling and dense as well as populist. The two records between them set the band up as the ‘National Treasures’ they would name their singles collection after. After Send Away The Tigers the Manics were here to stay. It’s no wonder they’ve chosen to celebrate it.