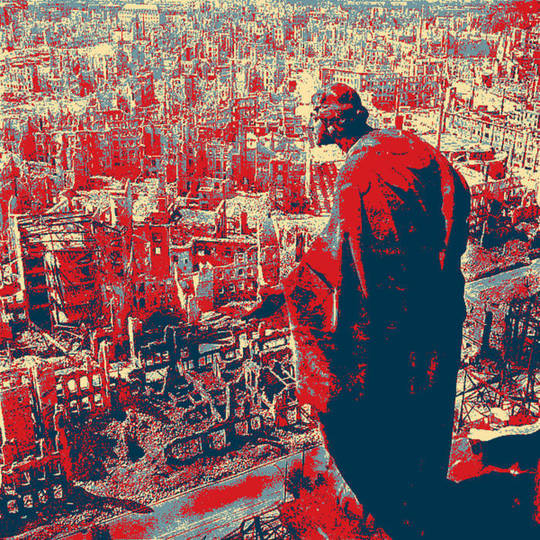 The story of krautrock tinged post-punk outfit New Apostles stretches back nearly four decades. Originally formed in 1980 in the Nottinghamshire (then) mining town of Mansfield around a core trio of Phil Pidluznyj (vocals/guitars/keys), his brother Andy (bass) and Andy Whitehurst (guitars/vocals), the band failed to make much headway outside of their hometown and its surrounding area and eventually called it a day in 1998. Which was a crying shame as some of those artifacts from that era reveal a visionary band caught somewhere between a rock and a hard place, as the excellent 'Hanging Tree' from that first phase ably demonstrates.

So when the trio announced they were getting back together two years ago after a 17-year-hiatus, it wasn't a case of welcome back but more about how they'd fare at readjusting within a musical landscape that's changed so much since they were last with us. Having got through more drummers than Spinal Tap during their initial existence, the trio opted for the tried and trusted synthesized beats of their formative years. With an armoury of songs at their disposal, an EP West Bank was released at the tail end of 2015 followed by an album Apparatchiks in the early part of last year. Both displaying various elements of the band's diverse make-up, and both occasionally uncompromising in nature, it was no surprise when Phil Pidluznyj announced via New Apostles Facebook page a week before last Christmas that a follow-up was imminent.

Just over a month later, Recurring Dream is with us and while not as immediate as either of its predecessors, it highlights New Apostles unyielding nature while showcasing the many strings on their accomplished bow. Recorded last September with Mark Parkins at Nottingham's Psyrex Studios, Recurring Dream was launched as a series of four double 'A' side singles late last year based on The Wedding Present's Hit Parade project which saw them put out one single per month throughout 1992.

Unashamedly political throughout their 37 year existence, Recurring Dream opens with 'The End Of Everything', a song that pretty much declares armageddon based on the events of the past 12 months. Intrinsically post punk in structure and delivery, its origins can be traced back to bands like The Comsat Angels and The Sound, both ironically contemporaries alongside New Apostles back in the day rather than the peers they'd be considered now.

Better still is 'Crickley Hill', which might take its name after the scientific country park situated in the Cotswolds but actually continues the dark lyrical theme. "It's another world but the same old story" intones Phil Pidluznyj over coarse mechanised drum patterns and an insistent guitar riff that's musically reminiscent of Movement era New Order or Wild Nothing's more recent musings.

Elsewhere, 'Sad Case' could be a Television outtake with a brass section incorporated while unofficial title track '22:22' mixes caustic lyrics with motorik beats and an elongated instrumental passage towards the end that owes as much to new age prog bands like Dungen as it does post punk.

While the likes of 'Ouija Girl' and 'Down From The Stars' aren't quite as prominent or memorable as the aforementioned closing number, 'Pink Tangerine' is a masterclass in experimental noise that ticks every box and crosses every boundary in the alternative sub-genre library.

With a new EP already mooted for release in the latter part of spring New Apostles' productive ethos doesn't show any signs of abating just yet. Which is why they should be embraced while we still have them in our midst, and Recurring Dream is as good a place as any to initiate such reverence.