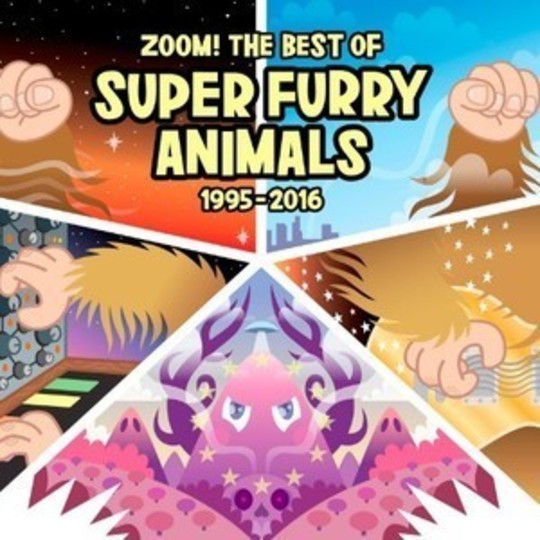 It's impossible to say who the most consistent band of the past 25 years is, but one name that would almost certainly be found in the mix would be Super Furry Animals. Since putting out their debut EP Llanfairpwllgwyngyllgogerychwyrndrobwllllantysiliogogogoch (In Space) in the summer of 1995, they've maintained a level of consistency with both their albums and singles very few other artists - if any - could match. Even during the fallow years - and it would be hard to envisage even the most die hard fan ranking 2007's Hey Venus! or its successor and as of yet, final long player to date Dark Days/Light Years alongside the likes of 1997's Radiator or 2001's Rings Around the World where overall quality control is concerned. But then that's why the Super Furries have achieved the longevity while many of their original peers fell by the wayside years ago. Never ones to look backwards or stand still, instead always prepared to take risks and confound expectations. So it shouldn't come as any surprise that they're still as relevant in 2016 as they were back in the mid-Nineties.

Which is where we'll start as it's where the first of these two releases originates from. Recorded in the early part of 1996 and released that summer on Creation Records, it doesn't bear thinking about that Fuzzy Logic and its four accompanying singles were somehow thrown in with the rest of the Britpop rabble – despite sounding like nothing else around. Indeed, one could probably argue that its creators haven't sounded like anything else since either, but let's remember this was a time when challenging, independently produced music was afforded airtime on both national daytime radio and television. Where it was possible to switch on the TV at 11am on a Saturday morning and watch the colourful video for 'God! Show Me Magic' amongst a cast of other indie hopefuls alongside the predictable sea of dross. Whether a band like the Super Furry Animals would achieve similar mainstream exposure today is unlikely but during that spring of 1996 my love affair with them began.

Having already purchased both 'God! Show Me Magic' and its predecessor 'Hometown Unicorn', the anticipation for the release of Fuzzy Logic was understandabe. Those first few listens were akin to being transported into someone else's world. 'Frisbee' had us "drowning in designer ice cream", BBC weather girl Sian Lloyd got a mention in 'For Now And Ever' and some bloke called Howard Marks (forgive me for not knowing who he was but Mansfield was a very unforgiving place back then) seemingly appeared all over the place. Even the inside sleeve of the record invited you into their world. Their philosophy. A place where Isaac Newton would happily swap anecdotes with Ron Mael from Sparks. Where Bill Hicks and Rhys Ifans would take it in terms to feed Stavros The Hamster while Frankie Fontaine becomes abducted by aliens. A nostalgic throwback like the ones enjoyed by the Britpop clan they'd been unduly associated with this was not.

Musically there were traces of Hawkwind. Autechre. The Beach Boys. Wire. AC/DC. And that's just on side one. But more importantly when combined, this was the sound of the future. A perfect record encapsulating a time and place that was anything but perfect. Eighteen years of Conservative rule was about to come to an end but it was still bleak. Thatcher's legacy of consumerism and greed ruled and a change of office on Downing Street wouldn't change that. This was the sound of protest through the medium of music, albeit in a different context. Even now, Fuzzy Logic hasn't dated and certainly doesn't sound as though it was made 20 years ago.

Ah yes, its 20 this year, hence this warts-and-all deluxe re-issue. Alongside the original album there's a further nine b-sides and EP tracks plus standalone single 'The Man Don't Give A Fuck' on the first CD. The second one features a selection of demo recordings from June and October 1995 which while not being as instantaneous as the recorded versions that followed, lay their intentions boldly from the outset. Tagged on the end of the CD is a nine-song set the band played at the now departed Phoenix Festival in 1996 which is probably more for completists than anything else, but then that beggars the question: why would you not own Fuzzy Logic in the first place? (9)

Released on the same day is Zoom!The Best Of Super Furry Animals 1995-2016, a 37-song career spanning compendium that traces every step of their development from those early pre-Creation EPs through to this summer's Welsh football anthem 'Bing Bong'. While mainly focusing on singles and lead EP tracks, it's interesting that none of the album-only compositions selected for inclusion here were taken from Fuzzy Logic, still their finest album in my humble opinion. 2000's Mwng is also under represented with only 'Ysbeidiau Heulog' making the cut. Nevertheless, minor criticisms aside, it's difficult to castigate any of the choices that did make it onto Zoom!... either.

'Patience', a bonus track tagged onto the US release of Rings Around The World and 'The Citizen's Band', originally hidden at the start of third long player Guerrilla both make a welcome appearance here. What's also quite interesting and perhaps essential when putting the band's overall back catalogue into some kind of context is that none of the songs are arranged into chronological order. Instead, the band have used a mix and match approach which only serves to highlight the timeless nature these songs and its creators possess.

As with Fuzzy Logic, many characters inhabit Super Furry Animals' world. 'Hermann Loves Pauline' tells the story of Albert Einstein's parents while also referencing Marie Curie and Che Guevara. Listen carefully to 2003's 'Golden Retriever' and it could be a rewrite of The Beatles 'Day Tripper', albeit through the psychedelic eyes of Cardiff's most innovative musical sons. Delve deeper and the techno meets chamber pop that's 'Slow Life' bursts into life, eventually giving way to '(Drawing) Rings Around The World' which sounds like an outtake from Hawkwind's Masters Of The Universe yet predates the current psych rock movement by a decade and a half.

Indeed, the best way of describing the tracklisting is to split into two categories. Pop (CD1) and Experimental (CD2). The first CD finds the Spector-esque 'Run-Away' nestled side-by-side with the flamenco inspired 'Northern Lites' while 'Juxtaposed With U', arguably the band's most commercially pop statement to date, holds 'The Gift That Keeps On Giving' from 2007's Hey Venus! close to its chest for company.

The second half of Zoom!... is perhaps an altogether more lateral affair. Two minute exercises in punk inspired pop ('God! Show Me Magic', 'Do Or Die') vie for space alongside the elongated likes of 'Mountain People' and 'Receptacle For The Respectable'. Guerrilla's 'Night Vision' also gains some well deserved recognition amongst such hallowed company as does the band's ode to cannabis 'Smokin'', originally the lead track on 1998's Ice Hockey Hair EP. Closing with 'The Man Don't Give A Fuck' in a similar vein to their live shows, it's an all encompassing collection that cements Super Furry Animals status as national treasures for this and future generations.