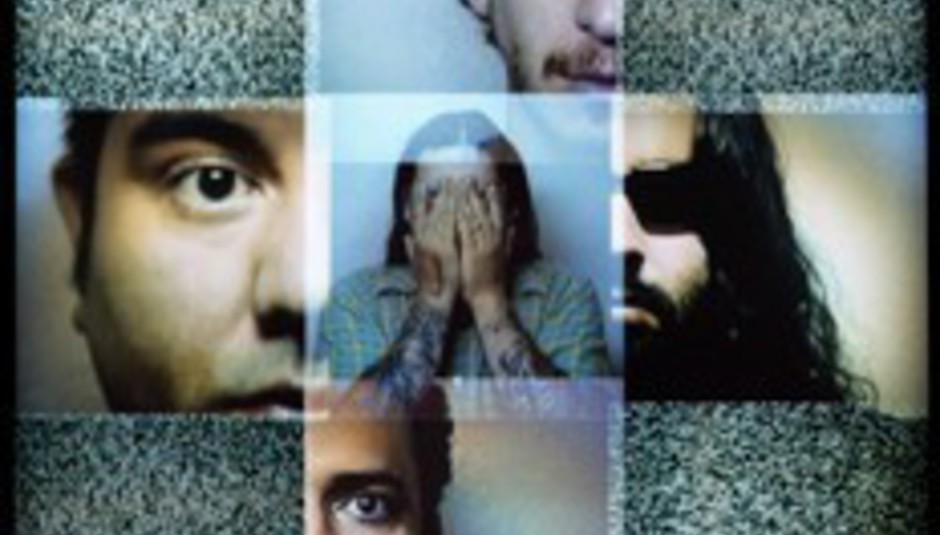 Stephen Carpenter seems relaxed. The Deftones guitarist slouches in his chair, backstage at London’s Electric Ballroom venue; behind him a table is covered in fruit and snacks, while in his hands he rolls a joint, almost certainly not his first of the day. He’ll smoke it throughout our time together.

Carpenter’s laugh is intoxicating, his politeness a grand contrast to how he’s presented in the band’s promotional photography. “I love to smile,” he says, his facial expression simultaneously and successfully backing the claim up. “My teeth look good, right? In photo shoots I want to smile, but then I’m told, ‘No smiling’_. What, I can’t be happy?” _

For promotional purposes, it would seem not: the portraits that appear on the Californian band’s website – here – present each member as anything but a smiley, happy sort; Carpenter in particular is made to look threatening, as if the eyes behind his shades burn red with murderous intent. Frank Delgado, whose role in the quintet has become more prominent since the release of 2000’s genre-splitting excursion into new musical territories, White Pony, appears as if recently arrested. His steely eyes sit to DiS’s left as we chat a few hours prior to show time.

“We’re meant to be here strictly for press,” says the keyboard player, who also contributes a wealth of samples and atmospheric electronics to the group’s sound. Carpenter, although obviously in no particular hurry to leave DiS’s presence, is nevertheless a little tired of the question-and-answer process.

“The thing that becomes routine is all the press,” he says. “Otherwise, it’s just us throwing stuff out – we’ve got new songs we can go play, and that’s exciting. Interviews can be exciting, when they’re interesting. But when it’s just all redundant hype about the record... I mean, I speak for myself, and I said this in another interview: I’m not a hype person. I used to hype ourselves up – it was exciting – but by the time we got past _White Pony, I was over it. At that point, it was our third record, and I really believed in it. At that point we’d become successful, or somewhat successful, on the business side. The business side’s always trying to interject their ideas and concepts, but they’re not part of it. I really believed in that record – I used to joke around, ‘Man, if you can’t sell ten million of these units, you’re terrible’. And they couldn’t, but it’s still our best-seller.”_

Carpenter’s tendency to wander off on conversational tangents is a neat parallel to the non-linear, boundary-pushing music his band creates – the five-piece are completed by vocalist and guitarist Chino Moreno, who makes a brief appearance but doesn’t contribute to the recorded interview; Abe Cunningham, drummer, who is first in line to shake DiS’s hand when we arrive; and Chi Cheng, the bassist whose presence isn’t once noticed prior to the band’s set.

"There’s no formula to it - if there was a formula, we’d have bottled it by now"

Deftones have never shied away from experimenting, and since the writing of their second album, 1997’s Around The Fur, they’ve had their own rehearsal and recording space, The Spot, within which to let their creative juices flow. Given the freedom the band were allowed following White Pony, it’s little wonder that record’s two successors to date – 2003’s self-titled effort and the new Saturday Night Wrist long-player – have confidently declassified themselves from any rock music sub-genre or scene. Nu-metal, Deftones certainly are not.

_ “I think we’re happy that we’re still experimenting,”_ says Delgado, “and it’s not an easy thing to do, as there’s no formula to it. If there was a formula, we’d have bottled it by now. We’re older now, and we know the business – we know we need to find a creative environment for us to work in.”

“That’s kinda what we like to do, to a point – we like to throw people a curveball,” adds Carpenter.

Delgado continues:_ “Like he says, about that curve: we try to do that with everything we do, in a way, without hurting ourselves and taking us too far left. Whether it’s the concept of a record, or the songs within the record, we’re always trying to throw a curve. And it’s hard, like you were saying, because you have to go through this redundant bullshit – press photos have to look a certain way. It’s kind of hard if you want to try something different. That’s the line we have to walk, though.”_

Saturday Night Wrist is just another obstacle on that line, another album made with scant regard for sales or fan satisfaction, although respect is maintained – nowadays, Deftones write for Deftones, and nobody else. Although White Pony was a massive success, much of the financial reward that came the band’s way was down to the writing and recording of the single ‘Back To School’, a song that didn’t even feature on the original album release. Moreno has since said that the song was released as an example to bands and fans alike of how easy it was to write a hit (click here for reference; here for the song’s video); the band’s label, Maverick, simply wanted a single to promote the record with, as the vitriolic-and-robotic (and Grammy-winning!) ‘Elite’ and nerve-shredding ‘Knife Prty’ weren’t all that likely to gain the MTV seal of approval. _ “We’re not trying to be part of any formula, including our own,”_ says Carpenter of the band’s reluctance to remain stationary, allowing their music to stagnate. “I mean, we could look at music that we’ve done, and that people enjoy – ‘Oh, I love this song!’_ – and we could easily replicate that because people really liked it. But our opinion is that if people really like that, we won’t do that. We’ve still got to be us – I listen to all the records and there is_ a Deftones sound. A Deftones stereotype is to say we’re dynamic – we’ve got heavy stuff and softer stuff and all the middle stuff. So that’s where we stereotype ourselves, and it’s an almost impossible stereotype to break when you’re trying to branch out into every direction, you know what I mean… it’s going to be that way.”

_ “I think it’s a good place to be,”_ continues Delgado. “Ever since _White Pony we’ve pretty much opened these doors and allowed ourselves to take turns which won’t alienate fans, but show respect for them.”_

Saturday Night Wrist is sure to be met by a hefty degree of acclaim by critics who’ve previously noted Deftones’ preference for challenging themselves over recycling hackneyed riffs and tired rock-raps – while the likes of Korn and Limp Bizkit, bands who were breaking into the mainstream proper before and around the time of White Pony’s release, Deftones chose stealth and subtlety over lyrical braggadocio and misogynistic backstage behaviour. They didn’t sing of pain and torture, at least not in any literal way, and their approach to modern rock was one influenced by the likes of My Bloody Valentine and The Cure, not Mötley Crüe. Rolling Stone has said of Moreno’s vocals: “Singer Chino Moreno sounds like he's conversing with a choir of voices inside his troubled skull. He's the most Dada of the metal screamers.”

"When Chino threw another guitar into the mix, it opened a whole new world of chaos"

“We were very confident,” says Delgado of the band’s decision to deviate from the comparatively formulaic song structures of Around The Fur on its follow-up, White Pony. “There was a conscious decision to make something really different, because at that particular time there was a wave going around that everyone expected us to ride, or kick water in… you know what I mean?”

Said wave, of course, was started by Korn et al. In the same year the Bakersfield nu-metallers made magazine covers their second home, Deftones suffered a 1/5 review for White Pony in apparently broad-minded music magazine, Select.

_ “The real change happened only because Chino played guitar from then onwards,”_ continues Carpenter. “Otherwise it was just the four of us, instrumentally. When Chino threw another guitar into the mix, it opened a whole new world of chaos.”

The hole to that world has steadily widened over these past six years; now, with Saturday Night Wrist, Deftones are ready to tear it in such a way that it can never be closed – all thoughts of the band’s past connections with a maligned genre they never claimed to be part of will be eradicated, and educated critics will undoubtedly come to the conclusion that, for all Moreno’s seesawing vocals and Carpenter’s brutal riffs, Deftones are far more than a make-up-the-numbers metal band. Their music isn’t the preserve of big-trouser-wearing kids, slightly too chubby to be accepted by the emo crowd across the playground; it’s a mature, developed beast, and one that’s so grown up now that no amount of restraint will keep it from attaining respect and rewards.

Carpenter stands and relights his joint; he chuckles slightly at some half-joke or other DiS makes as our time together reaches its end. Outside, Moreno and Cunningham talk merrily with their PR. Whatever complications dogged the gestation of Saturday Night Wrist (and you can look elsewhere to read about them, as there’s no room for negativity here), it seems that the band is very much one of happy brothers again. They’re off the map and absolutely content there: rein them in at your peril.

Deftones' _Saturday Night Wrist is released through Maverick on October 30; its lead single, 'Hole In The Earth', is out now. You can watch its video here_.