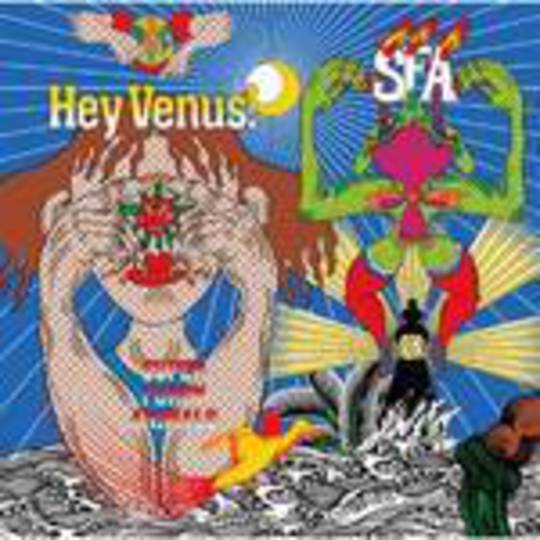 After more than a decade of reinventing the wheel, it’s safe to assume the creative responsibility of being a Super Furry Animal is exhausting. Rather like legendary Ukranian Olympian Sergei Bubka, you can only clear the bar that you’ve set at a dizzying height so many times before you have to accept that you can go no higher.

Fortunately for us though, SFA are stretching their Indian summer further beyond our horizons, and their run of gold medal albums sees no sign of abating.

Hey Venus! is the most concise album in the band’s history, and after a series of ever-stretching forays to their creative boundaries, it sees them refocusing on the themes and sounds that originally put them amongst the pantheon of musical scholars. They are quite the Plato of pop, if you will.

So you have the blitzkrieg nonsense of opener ‘Gateway Song’ followed by the ringing, stomping soul of ‘Run-Away’, which begins with a marvellous spoken word introduction: _“This song is based on a true story. Which would be fine, if it wasn’t auto-biographical”. Lead single ‘Show Your Hands’ works far better in the context of the album than as a standalone track, its gently psychedelic vibe slipping into this tracklisting comfortably. ‘The Gift That Keeps Giving’ crescendos tenderly, enhanced by a horn section that the Furries seem to be able to utilise more effectively than anyone else.

The most beguiling aspect of Hey Venus!, however, is the production – it’s nothing short of jaw dropping. Never obtrusive, it begins to reveal itself over repeated listens. The multi-layered vocals, harmonies and deeply embedded refrains lay next to deft percussion, elegant keyboards and slowly seeping guitars. Most obviously, these audio sleight of hands become apparent in the midst of the record, on the barracking ‘Into The Night and the digital rock of ‘Baby Ate My Eight Ball’, the latter seemingly made almost solely of vocals piled upon vocals piled upon harmonies. It’s quite mind blowing.

The biggest criticism you could level at the new SFA record is that, for them, it breaks no new ground. If you were being particularly harsh, you could compare any song with an existing track from their back catalogue. That would be unfair, though, as a) the band have a huge collection of songs in the vault, and b) they’ve treaded further than any bands of recent times. So yes, ‘Carbon Dating’ does repeat the Ennio Morricone obsession heard on Mwng and the despairing, sighing beauty of ‘Suckers’ echoes one of their finest tracks, ‘Mountain People’. But these songs, particularly ‘Suckers’ - which is an album highlight - are quite wonderful in their own right.

Towards the album’s end ‘Battersea Odyssey’ emerges, comprising what is probably the only below-par effort to be found here. But it’s quickly rectified by the ‘Presidential Suite’-esque _’Let The Wolves Howl At The Moon'.

Cynicism asks how much farther SFA can keep going while maintaining such a high standard. Sergei Bubka would be proud, however, as Hey Venus! smartly clears the bar they’ve set themselves with ease.