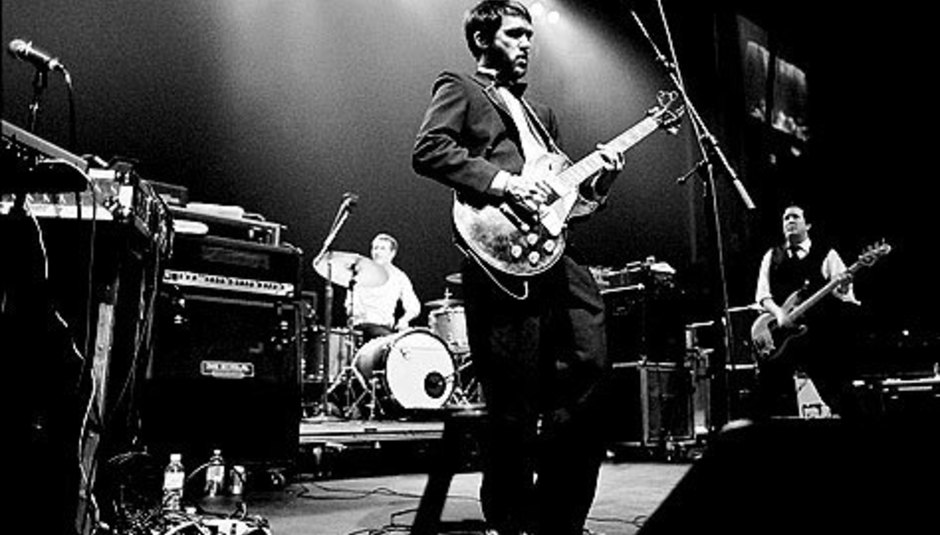 In around a month long-time DiS favourites Cursive release their sixth full-length, Mama, I’m Swollen in the US via Saddle Creek, a UK release via the label’s European division hot on its heels. Seizing the opportunity for a love-in, we thought we’d suggest six recorded highlights from the band to date. Not their six best songs exactly, mind – their six highlights to the second, yo.

Due to the specific nature of this endeavour, finding suitable videos wasn’t an easy task. Instead of throwing in some horribly recorded live footage of the songs in question, we’ve included a couple of tour videos which the band have been making while on the road this year in the US. If you listen carefully among the swathes of noise and manic organ strikes that make up ‘The Ugly Organist’, you can hear an unhinged, unstable Tim Kasher introducing the record – the songs from the “ugly organ” that make up this whole. Precisely one second into its first song proper – after eight super-quick-drumbeats, Gretta Cohn’s cello and dual guitars collide to optimum effect. It’s the kind of superbly realised, aggressively melodic and perfectly searing riff that instantly emblazons itself upon the listener’s memory, and in some intangible way indicates the following will be something very special indeed. Three minutes, thirty seconds into the opening track on Domestica is when it ends. It’s also the point where the guitar – which has in turn been muted, obtuse, harmonically-driven and plain squalling brutal over the previous few minutes – prepares itself for a segue into the next song (‘The Martyr’) that is so unlikely, yet so eloquent and so commendably fluid it beggars belief.

At this point in the song, the sentiment – of catharsis, relief, personal redemption and eventual hope – is out there. At two minutes, fifty-six seconds exactly – having just prior exploded into the glorious cacophony that will see the album out (with the help of a choir reprising that earlier coda from ‘A Gentleman Caller’) – the guitars crunch, ring out – do it again – and then they head for the heavens. The effect is one of blissful, unconditional release, the song (just) topping ten minutes and concluding the album in a manner wholly appropriate: gut wrenching in terms of emotional impact. Oh, it’s so good. But that crunch-then-ring-then-ascend guitar is a mother-f*ing moment. This song is divided into two halves, the first realised as excerpts from actual notes retrieved from April Connolly’s bedroom floor, and the second serving as reply – “the drunken, erratic response from April's ex-boyfriend Trevor Post upon finding said various notes.” Each half can be broken down further still: the first part buoyed by licks of jagged, relentless cello, and the second of guitars smoothing things over while each party’s notices conclude. Three minutes, eleven seconds in is where Kasher unleashes ‘Trevor Post’’s closing ramblings, an utterance so horrendously desperate, misguided and honest it chills the bones. Check it: “Valentine, I want to feel your hips pressed up against mine / We'll push into each other – love's alive / It might be fleeting, but it's ours, and it's tonight / So won't you reconsider love-lost lives? / You might be lonely, but I'm still by your side / You might have to leave, but not tonight.” Another lyrical nugget courtesy of the April character, and just as telling in its own way: “When you said you loved me, I knew I was getting fucked.”

The tremendous blow of these words – this complete opposite of a love-letter – is softened by the eventual tenderness Cohn’s leavening cello imbues on matters, all the more effective given its earlier assault on the senses. “Clint steps in to establish the beat / 4/4 Hip-Hop and you don’t stop” – in this self-explanatory opening number of the EP (which welcomed Gretta Cohn on cello and preceded The Ugly Organ) Kasher is kind enough to point out and explain the exact moment I’m talking about: drummer Clint Schnase (now departed) does indeed step in to establish said beat, and it rocks. The song itself is a successful exercise in self-reflexivity – a “unique approach to start an EP / Intended to shock, create a mystique / A cheap strategy – a marketing scheme / Building awareness for the next LP.” Promoting their own music, with their music, acknowledging the Shudder To Think and Fugazi influence, loping along on an assured hip-hop beat – it is quite brilliant, and for the most part unlike anything else in Cursive’s oeuvre. Erm, yeah, bit of a cheat here. Thirty seconds into ‘Hymns For The Heathen’ Kasher begins to exhaustively summate the 13 tracks (or ‘hymns’) previous, rattling off an apt insight and means by which to interpret Happy Hollow – a record as thematically rich, inquisitive and outright provocative as Cursive have ever produced (review). Rewind eight years, and one minute sixteen into ‘Icebreakers’, just get a load of that ragged, anguished howl: “But we just can’t see anything!” intones Kasher, the song itself exploring the imagery of eyes, blindness and freezing cold that flavoured so much of their earlier work.

So, what do you think? Agree? DiSagree? What about the first two records? Or that bit two-thirds into ‘A Gentleman Caller’? Is The Ugly Organ Cursive’s finest hour? Are you as pumped for the new album as we are? How good is that new M.I.A. tune in Slumdog Millionaire? What's your favourite Cursive moment? DiScuss...