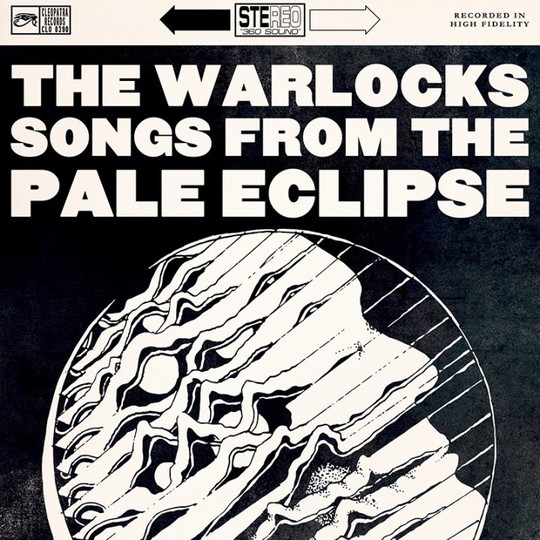 Having emerged from the same Californian psychedelic scene as The Brian Jonestown Massacre 18 years ago, it's been a rocky road for The Warlocks and their one constant member, Bobby Hecksher. Numerous line-up changes while switching labels with almost every subsequent release has taken its toll at times, yet to Hecksher and his roving band's credit, they've managed to put out a stream of records to a constantly high standard.

Nevertheless, they've been pretty quiet on the release front since last long player Skull Worship came out at the tail end of 2013. So with Songs from the Pale Eclipse, the band's seventh collection to date, Hecksher and co have taken an entirely different route. Instead of embarking on the arduous process of writing new material, they've gone back through vaults of demos recorded over their long standing career before selecting ten songs initially recorded at various stages of the band's career. Having reworked and re-recorded each piece, they've managed to conjure up an album that's up there alongside some of their finest.

Currently signed to LA imprint Cleopatra Records - it's easy to lose track with just who is releasing The Warlocks records these days. Songs from the Pale Eclipse is an ambitious yet cohesive statement of intent that firmly cements its creators status as one of the leading exponents of psychedelic rock in its twenty-first-century incarnation. Distinctive in style and sound, particularly Hecksher's drawling vocal and JC Rees expedient guitar surges, it's a record that pulls no punches in execution or delivery while conveying some of the most heartfelt lyrics Hecksher has ever penned.

Take lead single 'Lonesome Bulldog', which sees him in a reflective state of sombre. "Just another heart with nowhere to go, nothing to eat, nothing to drink, no one to love, no one to talk to" he opines solemnly over a lolloping groove that rivals among The Warlocks' finest compositions since their inception. Beforehand, opener 'Only You' kickstarts the album into life fusing the band's trademark pounding drum and weaving rhythmic guitar sound while Hecksher's voice hovers menacingly low in the mix.

What's most interesting about Songs from the Pale Eclipse is when The Warlocks veer into previously unchartered territories. Both 'Love Is A Disease' and 'Drinking Song' do this masterfully. The former in the shape of a semi-acoustic lament that's more blues than errant psychedelia. The latter opting for a Sweetheart Of The Rodeo era Byrds feel that further highlights the depth of its creators musical palette in the process.

The last two songs on the record, 'I Warned You' and 'The Arp Made Me Cry', are eerily reminiscent of Spiritualized. Which I'm sure most will agree is no bad thing. Chiming guitars, gospel style organ and a sense of calm prevails throughout both pieces. They provide the perfect ending to a deftly constructed journey through The Warlocks' timeless annals.