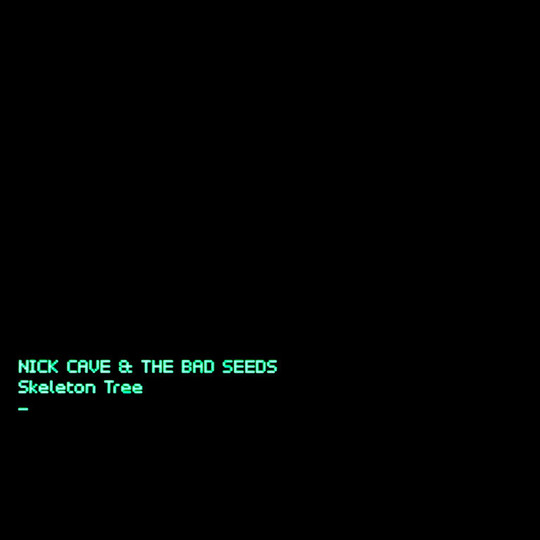 Right from the outset Skeleton Tree is a very unusual record. Nobody (or at least a very small minority of listeners) is going to approach this album in the coming months without knowing at least the most cursory details behind its appearance. Anyone who has seen One More Time With Feeling, the Andrew Dominik-directed film about its creation, will arrive at Skeleton Tree already emotionally scarred. It’s a film partly about a band, a legendary band no less, and partly about a catastrophic event and its impact on those most affected by it. There is no way that audiences can really understand the impact on Nick, Susie and Earl Cave of Arthur Cave’s death last year, but One More Time With Feeling at least allows us to get a small insight into how the death of a son can inform the recording of songs, the process of songcraft, the act of being Nick Cave.

It’s worth saying now that Skeleton Tree, the sixteenth album by Nick Cave & The Bad Seeds, can’t do that. This album doesn’t have the same emotional impact as its companion film. More accurately, it cannot hope to. It is emphasised in the film that this record goes out in a looser form than most Bad Seeds records. Cave and his collaborators, chief amongst them the addictively enthusiastic Warren Ellis, have – to an extent – let things go here. You can tell. 2013’s Push the Sky Away, born out of a similarly economical approach to arrangement and instrumentation, felt almost inconceivably incomplete, despite its sparseness. In contrast almost every song on Skeleton Tree feels like it’s missing something, whether it’s just a small string flourish or just a little extra production.

Maybe that’s the point. Both this record and One More Time With Feeling are nothing if not stark depictions of absence. It is crucial to remember that Skeleton Tree is mostly comprised of songs written before the trauma of last summer. It is the evolution of those songs, and specifically their lack of adornment, that is telling here. Whereas much of the material on Push the Sky Away sounded like it had been purposefully stripped back – as if a tremendous effort had been put into its minimalism – most of Skeleton Tree sounds almost demo-like.

That’s not a bad thing by any stretch of the imagination. ‘Jesus Alone’, the captivatingly haunting opener, is effective precisely because Cave and Ellis have resisted the temptation to work on it any further. Even looking past its prophetic opening line it has to be one of the most strikingly affecting openers in the Bad Seeds catalogue to date. One can hear the spaces in which – in years gone by – Blixa Bargeld, Mick Harvey, James Johnston, or any of the other weighty names that have passed through the Bad Seeds over the years, could have been given an opportunity to stamp their mark on material.

Of course this is probably less a result of Cave’s loss – a loss that clearly haunts those spaces – than an affirmation of the songwriting confidence that Cave and Ellis now have in their unique partnership. The magic of so many Bad Seeds records has been the vague sense of a sprawling band attacking the material given by their ringleader. That Ellis’ input had seen the Bad Seeds transformed into an outfit where less is not only more but also an opportunity for genuine songwriting experimentation is truly remarkable. ‘Girl in Amber’, ‘Magneto’ and ‘Anthrocene’ are exceptional examples of the changing winds that have come across this band of late. All three almost feel straining at the bit to escape, or at least to dress up their skeletal bodies with flourishes

Having said all that, it must be acknowledged that it’s this same confidence that makes some of Skeleton Tree’s weaker moments more problematic. ‘Rings of Saturn’, ‘I Need You’ and ‘Distant Sky’ are the guilty parties: fine songs, but over multiple listens it’s difficult not to feel like they are lacking something. ‘Distant Sky’ is a particularly interesting example, with the participation of Danish opera singer Else Torp strangely subtracting from the song’s impact rather than adding to it. Despite containing the album’s most bluntly penetrating line – “They told us our gods would outlive us, but they lied” – it’s a song that never quite reaches its full potential. Torp’s voice just sounds too perfect placed next to Cave’s weary tones, especially when aligned with an ambient arrangement that veers towards new age.

‘I Need You’, meanwhile, simply feels like the latest Cave straight-ahead pop effort that doesn’t quite work because of its conventionality. For every classic in this department (the eternally overlooked ‘Straight to You’ springs to mind) there’s always been clanger like ‘Nature Boy’. ‘I Need You’ is somewhere in the middle, albeit leaning towards the latter. Its swelling synths aren’t full-bodied enough to carry an otherwise fairly uninteresting arrangement and Cave’s over-accented croon doesn’t work as well as his almost off-the-cuff approach to the rest of the album. ‘Rings of Saturn’ simply fails to stand out, as if its lack of inclusion in One More Time With Feeling is itself an acknowledgement of its instrumentation’s lack of decisive individual character.

‘Skeleton Tree’, the eponymous closer, is a strange one. It stands out as a relatively straightforward band arrangement, the only one on the album that is definitively led by guitar. Whilst one suspects that on other records it would fail to make a huge impact, here its “Nothing is for free” refrain and its closing declaration that “It’s alright now” function in much the same way as Cave’s assertion that – despite tragedy – he will continue to work. It feels almost like a song quickly sketched out during some studio downtime, a reminder that the Bad Seeds discography is overflowing with seemingly effortless tracks that many a band would pore over for weeks on end. It might as well be the definition of the record as a whole: an album that serves the purpose more of cementing Cave’s status as one genius who isn’t going anywhere. It is, therefore, perhaps as a response to the perception of bereavement, rather than a document of it, that Skeleton Tree really finds its great purpose.

Despite, or perhaps because of, this, in the canon of Bad Seeds albums Skeleton Tree is immensely difficult to pin down. With my Cave fandom hat on I cannot help but feel this is a noticeably inferior record to its immediate predecessor, and one that is less powerful on early listens than the likes of Tender Prey, The Boatman’s Call or the chronically underrated No More Shall We Part. With my (far more ridiculous) music hack hat on it’s hard not to feel that the idea of reviewing this album right now is utterly ridiculous, serving no real purpose other than to reflect the ultimate crassness of music journalism. Present us with an album that emerges from real tragedy and we are at a total loss. There’s no way to respond to this album without responding to the events and feelings that surround it, and if this album feels like it’s in the bottom half of the Bad Seeds discography right now then it’s as likely to be because the rawness exposed in One More Time With Feeling makes it immensely difficult to consider this album on purely artistic terms. Whatever one makes of the songs presented here, at least we should all be able to agree that another addition to Cave’s legendary, beyond comparison catalogue is in itself enough of a reason to feel very satisfied.