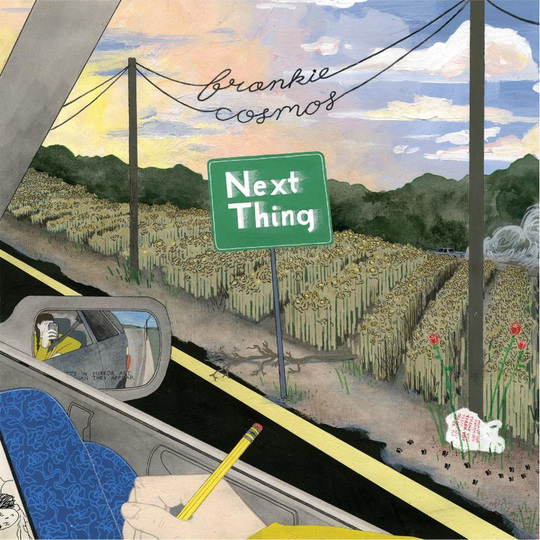 An indie-pop descriptor that I think is overused to the point of imprecision is ‘sad.’ It’s like ‘alternative,’ which has come to claim any recording not dolled-up in millions of dollars’ worth of production. ‘Sad’ can be just as easily—and equally as uninformatively—used to label anything that doesn’t radiate pure, headstrong joy. Frankie Cosmos’s latest, Next Thing, certainly doesn’t radiate pure, headstrong joy. At face value, it’s a record most generally about all the things in life that don’t add up. But I wouldn’t say there’s anything truly ‘sad’ about it.

The songs are hyper-condensed commemorations of comedowns. I’m part-way convinced that the brevity of the songs (which are all in the range of 0:46 - 2:36) is in direct reaction to something—decreasing attention spans, perhaps, or the common distaste for uber-pop structural artifice—but I also believe it’s the natural progression of an idiosyncrasy Kline has indulged since day one. Clicking through her more than 45(!) Bandcamp albums, you see that she’s rarely paid more than a little attention to pop structure, and has seemed to have had a helluva good time (not) doing it.

But though her music prioritises brevity and says what it needs to say quickly, the ‘big things’ of being 20 —existential dread, limited sense of direction, cross-eyed and painful relationships—are portrayed with a great deal of depth. It’s Kline’s small packaging and unaffected delivery that give her little words such gravity. Lines like “What are you doing?” ('Floated In') or “I don’t know what I’m cut out for” ('Tour Good'), reach into the incredibly broad territory of Big Life Questions, but when situated between lines like “I watched David Blaine by myself” (“On the Lips”), the Big Questions seem to be about the same size as all the other little things—which is to say: big? small? important? not?

As beautiful as Next Thing gets is during 'Outside with the Cuties', a sweet, slow tune with a gorgeously inconclusive vocal melody. It’s about love growing and being nurtured a long way from home. As with many of the songs, it puts humor alongside very straightforward sentiment: “You are bug bites on vacation/You find the sad in everything…I love you/I love you.” The self-awareness implicit in the her songs’ airtight structures, her comfort with complex melodies, and her finesse with lovelorn images makes the listener more comfortable with a straightforward confession of love. It comes across as the peaceful byproduct of a great deal of consideration, rather than the desperate, hanging-on-by-your-fingernails plea that one is accustomed to in pop songs.

Next Thing is an honest but beautified version of the mixed-up life of a city kid. The most interesting thing moving forward will be seeing how Kline's songwriting approach shifts shape. A rising level of popularity often engenders some kind of commercial instinct in the artist, more so if that instinct clearly exists in the first place. But Kline seems to have always been focused first and foremost on how to properly depict the intersection point between whimsicality and deep seriousness. I’m far from the opinion that ‘well-recorded’ is synonymous with ‘less authentic,’ so I suspect that her years will only lend her more tools with which to indulge that wellspring.