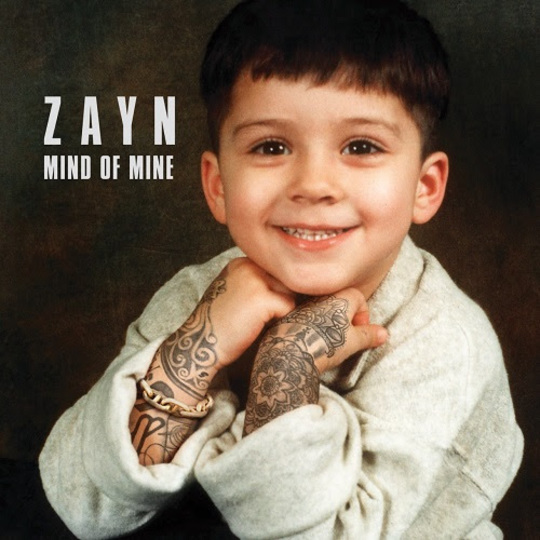 “I need you and I hate it”, croons Zayn Malik on his first solo album Mind of Mine. It’s a line in a Beatles-y piano ballad called 'Fool For You' (sorry, 'fOoL fOr YoU') about halfway through the 18-track album. The first song on side two, if you like. There’s a playlist of songs he was inspired by on Spotify, and you can draw a fairly straight line between John Lennon’s 'Imagine' there and this song, 'fOoL fOr YoU'. Its simple piano riff stands out against the woozy, nebulous alt-RnB that makes up the rest of the record; it’s not the best song on the album but hey, It’s not the worst song on the album.

Every time I listen to Mind of Mine, that lyric jumps out at me: “I need you and I hate it.” Is he talking to this ‘tainted’ but super-hot woman as the song would have it? Or is he really talking to the legions of Directioners whose tainted adolescent adoration he thinks he has outgrown?

On Mind of Mine, Zayn Malik is a riddle we all want to solve. If you just want to know if the album is worth a go then, yeah, it’s ok - the first half is pretty good, it tails off in the second but that’s 18-track albums for you. There are two decent bops ('Pillowtalk' and 'Like I Would'), one great collaboration (with Kehlani on 'Wrong'), one grower ('Befour'), some serious cheese ('TIO', 'Drunk' and some upsetting spelling ('Bordersz'). Pop ballads are regularly atrocious but Zayn really shines on his most downbeat tracks. 'It’s You' (or 'iT’s YoU' if you want to be a dick about it) is a long, warm sigh of a song. His dreamy falsetto underpinned by a melancholy organ line and coupled madly with Top Gun guitars and Disney film strings. Like Justin Bieber and panpipes, it shouldn’t work but it does.

Trying to decipher Zayn is trickier. In One Direction, he was dubbed the ‘mysterious’ one, both a bullshit euphemism for his English-Pakistani ethnicity and shorthand for the fact that he often looked bored. He was beautiful, rich and popular but unsatisfied. In shaky fan-filmed videos of One Direction’s performances, you’ll see Zayn fiddling uncomfortably with his mic or earpiece while his bandmates caper around stadium stages. The others soak up the applause but he bats it away and turns his back. He’s a sad king sighing and wishing he could trade his privilege in for a day in the real world.

We knew who he was then. But when he left One Direction, Zayn became this other entity, the boy who seemingly rejected fame and fortune to become ‘a normal 22-year-old’ man. The sad king abdicating to hang out in the market square. We are, some of us, fascinated by the difference between Zayn doing what he was told and Zayn doing what he wants.

Pretty much every review you’ll read will mention three artists: Frank Ocean, The Weeknd and Miguel. For Zayn working with Malay, who exec produced Frank Ocean’s Channel Orange, must have been a dream come true. Who wouldn’t want to be the new Frank Ocean? Effortlessly cool, universally adored, intimidatingly open and irritatingly elusive all at once; that must hold a lot of allure for someone trying to escape his stadium-pop roots. The record has Malay’s easy pawprints all over it. It’s also got a bit of The Weeknd’s dead-eyed, seduction but while you get the feeling that Abel might actually know what he’s doing in the bedroom, Zayn is pretty much just bragging to his mates about going all the way. In the same way, Frank Ocean riffs on the malaise of the over-medicated under-motivated ‘Super Rich Kids’ while Zayn brags about getting drunk - there is literally a song called 'Drunk' ('dRuNk') about being lusty and doing shots all summer. It’s a bit literal. The chorus goes “Drunk all summer, drunk all summer/We've been drunk all summer.” Which might, at the very least, explain ThE wAy ThE sOnG tItLeS hAvE bEeN sTyLeD.

Aside from these stabs at adulthood, Zayn keeps us at arm’s length throughout Mind of Mine. While he’s got the freedom to make music he’s more interested in than 1D’s over-engineered pop, there still doesn’t seem to be any joy in it. He seems often chilly and uncomfortable, and the drifting, misty nature of his vocals or lyrics which sound as often like teenage poetry as they do teenage sexts.

Perhaps the most interesting track is just an interlude named 'Flower' ('fLoWeR') in which Zayn bares his soul in Urdu; halfway through the drums come in like a distant roll of thunder before it all fades away into nothing. You can trawl 'Flower' for hidden meanings about Zayn’s religion, his upbringing, his thoughts on being The World’s Most Famous Muslim, as some have dubbed him. But you won’t find anything; “I’m just a normal person as well as following my religion, and doing all the normal things that everybody else does” he told The Fader in his first post-One Direction interview. 'I feel proud that people actually look to me and can see themselves in that.'

'They wouldn’t let me keep my beard,' Zayn has complained elsewhere of his time in One Direction. It sounds like time to crack out the world’s tiniest violin but I feel bad for him. He was trying to grow into his own man in a stiflingly controlled atmosphere, like those watermelons they grow in boxes so they’re easier to stack. When you’re the ‘mysterious’ one whose every ‘mysterious’ move is plotted and planned by middle-aged white guys using graphs and charts to categorically state, “This is what teenage girls will pester their parents to buy”, how are you supposed to become who you really are?

But even on an album of songs I strongly suspect are meant to be soul-baring confessionals, Zayn is unknowable. He’s tried on a couple of other personas, he’s harvested some sounds from other artists, he’s pretty open about the fact that he knows what sex is and boy has he had it, and he’s come out with an album that is enjoyable enough. But it’s not a step forward, really, it’s a step to the side. There are still hints of the pop star Zayn was drowning out the RnB icon he wants to become. Those hints are proof that he still needs us. And he hates it.