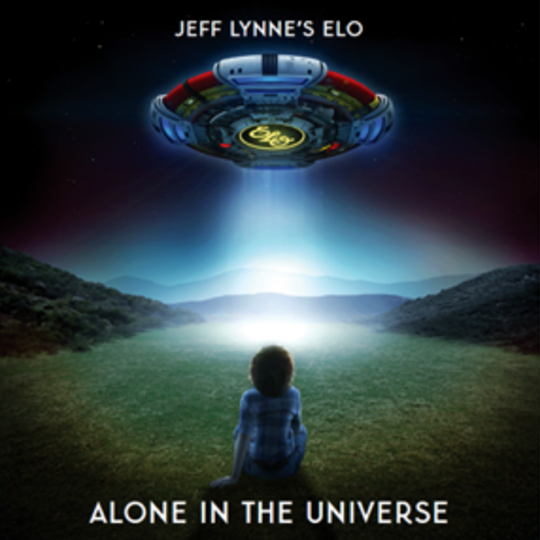 Look, let’s not beat around the bush here: you know exactly what Alone in the Universe sounds like. It’s an ELO record - Jeff Lynne’s ELO, sorry – and Jeff Lynne is, as my friend and colleague pointed out the other week, a man who even made The Beatles sound like ELO.

‘When I Was a Boy’ opens the album with the exact – I mean exact – same piano line as ‘Can’t Get It Out of My Head’. This isn’t so much a criticism as a note that this introduction serves as a warning that to expect anything different would be akin to thinking 'Oh no, Bond might not get out of this sticky situation; what dramatic tension there is in this film.'

OK so Alone in the Universe is so middle-of-the road that it probably has a bruised arse from dragging it over cats’ eyes. That isn’t to say it doesn’t sound glorious and enjoyable. Four-and-a-half decades on from the original band’s formation, Lynne’s voice is as warm and comforting as ever, his ear for a hook still sharp and his production is as shiny and gorgeous as a celebrity model’s hair from a shampoo advert. But still, there’s something missing.

The band has gone under the moniker 'Jeff Lynne’s ELO' since 2012. Shorn of a full 21 members since their 1970 formation, it now comprises just Lynne and his fellow multi-instrumentalist Richard Tandy and there’s no doubt they’re missing further input. ‘Dirty to the Bone’ – to choose one at random – sounds like it could be one of the year’s best pop tracks if only it had a bit of the band’s early weirdness.

The only place this really pops up is on ‘One Step at a Time’, the album’s best song. With proggy guitars and that treated falsetto, it is the only song on here that wouldn’t sound out of place on Out of the Blue. It sounds as though Lynne is aiming for the same on the album closer and title track, with layers of wall-to-wall shimmering keyboards, sliding guitar fills and mournful vocals, but it falls slightly flat. In truth, that’s a sadly recurring theme – a shame, because anyone who doesn’t want Jeff Lynne to be good is a person utterly without joy.

Alone in the Universe is a pretty unambiguous reflection on youth from one of music’s proverbial elder statesmen. “When I was a boy I had a dream,” sings Lynne on the album’s opening line; “All about the things I’d like to be/Soon as I was in my bed, music played inside my head.” This is a very, very harsh criticism, I know, but Lynne joined his first band in 1963, so I’m not convinced that we need to hear him reflecting on how much music meant to him at an early age 52 years later – we’d kinda figured that out for ourselves by now.

But still, we have to come back to the fact that the album does sound great. It’s weird to say that there’s potential in this 67-year-old, what with his estimated 370m records sold and universal respect – seriously, James Dean Bradfield was right when he said ELO were better than the Beatles – but there is certainly life in him yet. Alone in the Universe shows that, if he was up for it – and he’s perfectly entitled to rest on his laurels now, of course – then you could pair him up with pretty much any forward-thinking contemporary musician and he’d give you something brilliant.