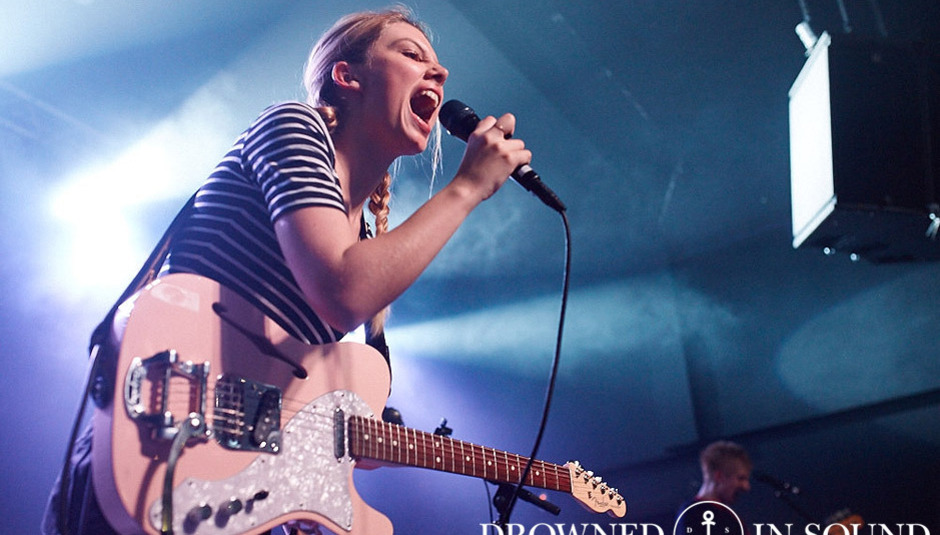 A handful of critically acclaimed singles and EPs followed, along with a relentless tour schedule that hasn't subsided since. In June they'll release their long-awaited debut album My Love Is Cool, an eclectic collection of twelve songs that will put paid to any notion they're merely grunge revivalists.

However, at the moment they're on the road (where else?). Currently in the middle of their biggest headline tour to date, DiS caught up with the band just before showtime at Nottingham's Rescue Rooms.

DiS: You've been on tour constantly since the start of the year. How have the shows gone so far?

Joff Oddie: All the tours have been so different to be honest. We started off in Australia which was amazing. It was our first time playing over there. Then we got to do a support tour of arenas with Alt-J which was also amazing. After that we went off to America in a tiny little splitter van doing massive drives between the States and that was pretty cool too.
Theo Ellis: We literally didn't have the same experience twice, and now we're out doing headline shows for the first time this year.

DiS: Did you find you had to tailor the set for different audiences most nights depending on where you were playing?

Theo Ellis: We've only recently rediscovered a song that's on our first EP called '90 Mile Beach' because the radio station KCRW were playing it.
Joel Amey: It's now back in the set and at this moment in time is probably the most fun song to play from our back catalogue so we're glad we rediscovered it. So I think we do tailor our set for certain places. Not pander to people but occasionally play something if it's become popular somewhere all of a sudden.

DiS: Tonight is the second date of the UK tour. How was last night in Glasgow?

Ellie Rowsell: Really great. They were such a good crowd.
Joff Oddie: Scotland always has this reputation of having the rowdiest crowds who are totally into the music and we've felt that at our shows but last night was iconically great.
Theo Ellis: We were getting "Here we fucking go!" chanted at us.

DiS: This is your biggest headline tour to date in terms of venue sizes. Did you expect the shows to sell out so quickly?

Joff Oddie: We wanted them all to sell out in the first day! We're nothing but bitterly disappointed! But in all seriousness, it's really weird.
Ellie Rowsell: I think Nottingham may have been the first one to sell out?
Theo Ellis: We had a show in Rock City at last year's Dot To Dot festival and it was so good.

DiS: A lot of people have pinpointed your nomination in the BBC's Sound of 2015 poll as being the catalyst for your profile rising but for me, the Manic Street Preachers tour last April was pivotal too. How did that come about?

Ellie Rowsell: I think our audience is quite young so it was good to play those shows as the Manics have an older fan base. We want to have as diverse a crowd as possible so it was nice to have that opportunity. It was good for us and also the Manics are one of the nicest bands we've ever met.
Joff Oddie: They chose us to go on tour with them. It's testament to them and their mantra as a band that they still choose who supports them.
Ellie Rowsell: They were so lovely to us and made sure we felt comfortable every night.

DiS: Your debut album My Love Is Cool comes out in June. I think its diverse range of musical styles may surprise a few people who had you down as having a predominantly grunge sound. Was it a conscious decision to fuse various styles or did everything evolve organically?

Ellie Rowsell: No it wasn't a conscious decision. I don't think anything we did with the album was planned. We just recorded the songs we were most excited with. We never thought about what genre they might be. We just let them grow into what they were supposed to be. Let them flow, so yeah, it was a natural progression. Maybe the grunge thing was just... I don't know? We still love that kind of music. There are still elements on the record but we've never solely been into one type of music. Maybe that comes across more on the album.
Theo Ellis: None of this was calculated. It's just a very honest interpretation of what we do. We've never been bothered about falling in with specific trends or genres.

DiS: How long did it take to record the album?

Ellie Rowsell: We started recording it in mid-November of last year and finished by the middle of December. Some of the songs are three years old, others like 'Silk' only six months. 'Freazy' is probably the oldest song on the record because we used to play a different version of it in our live sets early on.

DiS: How did you arrive at the final tracklisting? Did it change at any point over the course of making the album?

Ellie Rowsell: We went into the recording sessions with eighteen songs and didn't think too much about which ones we should or shouldn't do. It was more a case of just doing whatever we wanted to do next, and that's pretty much how the tracklisting developed. So some got left behind, which is sad but I think we'll come back to them one day. We only had a limited amount of time so we're really pleased with how everything turned out.

DiS: Have all of the songs off the record been played live so far?

DiS: Going through your back catalogue of singles and EPs, are there any songs which you wouldn't include in your live set for the foreseeable future?

Theo Ellis: We haven't played 'Nosedive' off the Blush EP in years.
Ellie Rowsell: There's very few we haven't played but I guess there's some we've forgotten about for one reason or another.
Theo Ellis: Sometimes it's inevitable we'll fall out of love with something...
Joff Oddie: Which is a shame.
Joel Amey: We hadn't played 'She' in a long time until the American tour or '90 Mile Beach' and that's now my favourite song to play live. That hadn't been in the set for a while but now it's so musically rewarding on stage for me. I like it when that happens.

DiS: You've built up a large fan base by constantly touring over the past couple of years. Do you think it's a necessity in the current climate for bands to play live as much as they possibly can?

Theo Ellis: I think we've always said we want to be recognised primarily as a live band.
Joff Oddie: When you're a four-piece guitar band like we are it's essential to get that level of confidence and competence by rehearsing, and for me there's no better rehearsal than playing live in front of an audience. It's been invaluable to us and really informed every record we've made so far.
Ellie Rowsell: It definitely depends on the type of music you're playing but I think as a guitar band it's probably the most natural and beneficial way to prepare yourself.

DiS: You've toured with a lot of established bands such as Alt-J, Swim Deep and the Manic Street Preachers. Have you learned a lot from those experiences?

Joff Oddie: We've learned an awful lot by doing support tours. Just seeing how other people go about their business or having someone else to talk to about what gear to use. Also, you get to see other people make mistakes and watch how they respond to them.
Ellie Rowsell: And that kind of thing is really important. We've had people ask us why we went on tour with certain bands because they're not cool or whatever, but I think it's important to go on tour with bands you don't necessarily match with. Colliding with and taking things from other genres is so interesting. For example, we went on tour with The 1975 and they're so different to us, but their whole huge production made us see what they do differently. We don't necessarily want to be like them but we still took something away from that whole experience. It gave us some ideas to work towards something really new and interesting.

DiS: You've had uninamimously positive reviews from all segments of the music press so far. Do you pay much attention to what other people say about the band?

Joff Oddie: I think you're permeated with that kind of stuff because you can always go on the internet and read someone's opinion of the band. But I don't think taking much notice of that is necessarily healthy and if we did, it would probably inform our songwriting differently.
Theo Ellis: I get more cut up seeing a negative fan post on Twitter than someone who's paid to write an opinion on us.
Joff Oddie: So far we've managed to keep our heads very much out of that.
Ellie Rowsell: We've never suffered from anything we thought was unfair. I've never read a review that's focused on anything other than our music. Whereas I've seen reviews of other bands where the writer is just slagging off their clothes and doesn't mention the music at all. That kind of criticism is unnecessary.

DiS: You're playing a number of festivals again this summer. Which ones are you looking forward to?

DiS: Aside from playing festivals, what are your plans for the rest of the year?

Ellie Rowsell: We're going back to America in May, then the album comes out in June. After all the festivals I'm not sure what we're doing to be honest? I guess there'll probably be another round of shows in the autumn.

DiS: Do you ever go home?

Joff Oddie: It probably feels like we don't! The last few months haven't been very real, but in a nice way.

DiS: You've been playing together for the best part of five years now. Was there ever a point where you thought about giving up?

Ellie Rowsell: Never! It's all about seizing every opportunity that comes towards you. Even when times were tough we managed to strike a balance that worked for us.

Ellie Rowsell: Don't have the expectation that things are going to happen overnight. It might take years but it will be worth the wait when it does happen.
Joff Oddie: It's probably the most boring piece of advice ever but just write and rehearse as much as you can. If you really want to be in a band for the right reasons and not just to wear cool jackets and flounce around it's all about putting in the hard work.
Ellie Rowsell: It also helps finding a good management team that believes in you.

DiS: Finally, are there any new artists you're particularly excited about at the minute?

Joff Oddie: Crows who are supporting us on this tour. Sunflower Bean as well.
Ellie Rowsell: I really like Hannah Lou Clark. She's pretty cool.

The album My Love Is Cool is out on 22nd June.

For more information on Wolf Alice visit their official website.

"Our tastes are more left field than ...