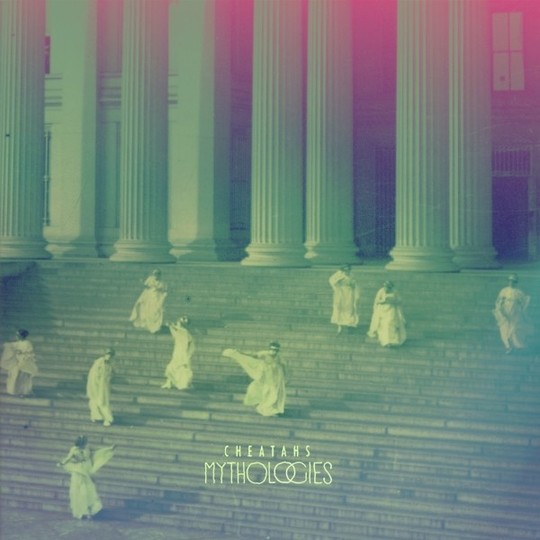 For a band that spent its first five years years embarking on an elongated voyage of self-discovery, Cheatahs have sure-as-hell made up for lost time. Having put out their self-titled debut last year to a wave of critical acclaim, they've followed it up 18 months later with a record that doesn't just raise the bar, but also suggests they're a band whose capabilities hold no boundaries.

While some of the reference points contained within Cheatahs still exist - most notably Nathan Hewitt's louche vocal delivery that recalls Swervedriver's Adam Franklin or a less frazzled J Mascis - there's a new found willingness to experiment throughout Mythologies' 13 pieces. It doesn't exactly reinvent the wheel; but, why would you? It's a perfect circle as it is. Mythologies delves into a potpourri of musical styles and genres to create something that's equally accessible as it is enigmatic.

Interestingly, several of these songs have formed the basis of the band's live set for most of this year. Which yet again demonstrates their eagerness to develop and progress rather than stand still. For example, at June's Best Kept Secret festival it was then-unreleased couplet 'Colorado' and 'Su-pra' that stole the show, bringing the set to a tumultuously climactic finale.

What sets Mythologies apart from its predecessor is Cheatahs no longer rely on volume or visceral angst as their centre point of creativity. Instead, there's more emphasis on melody and repetition and less constraints to make the record people would have expected based on their past works. Recorded in numerous locations from the idyllic Kent seaside resort of Ramsgate to a monolithic high rise next to MI5's headquarters overlooking the River Thames, it represents a giant leap forwards in terms of both content and execution.


Opener 'Red Lakes (Sternstunden)' feels to all intents and purposes like being stuck inside a dream. Structurally reminiscent of The Boo Radleys' 'Lazarus', Hewitt's glazed vocal sounding like it was recorded underwater. It's the first time Mythologies gives the impression it was created in another galaxy… but not the last. Recent single 'Signs To Lorelei' rides along on a futuristic synth melody while 'Tomorrow Never Knows' style beats hover intuitively in the background. "Remake! Pollinate!" declares Hewitt as the song subsides to a profound halt.

Elsewhere, Cheatahs display a propensity for writing catchy yet incisive pop tunes. 'Channel View' fizzes and ebbs with the tenacity of REM at their most lucid had they investigated in more guitar pedals during the mid-eighties. '紫 (Murasaki)', released earlier in the year as part of the excellent Sunne EP also emphasizes their rhythmic sensibilities, albeit from a different perspective.

It's on the diminutive 'In Flux' and pulsating closer 'Reverie Bravo' that Cheatahs demonstrate how much they've grown in such a short space of time. While the latter takes the listener on a discordant drone carousel, the former makes Germanic haste like a heavier Stereolab or spikier Neu! "The magic in the frame can get to you" insists Hewitt while his fellow cohorts pick up the pace accordingly, furiously engaging in a locked groove that threatens to eliminate all other shapes and beings from its subservient universe.

Granted, there a couple of pieces here that could have fitted onto the first album. 'Freak Waves' continues where Cheatahs left off, regaling comparisons with Swervedriver and Teenage Fanclub in the process. 'Deli Rome' also treads a similar path, only hazier due to the incumbent Beach Boys homage central to its pulsating heart.

Ultimately, Cheatahs haven't just upped the ante with Mythologies, they've created one of this year's most definitive albums and probably increased their own burden of expectation tenfold. Nevertheless, as problematic scenarios go, this one's worth its weight in gold. Here's to the next installment.

I Believe In Miracles