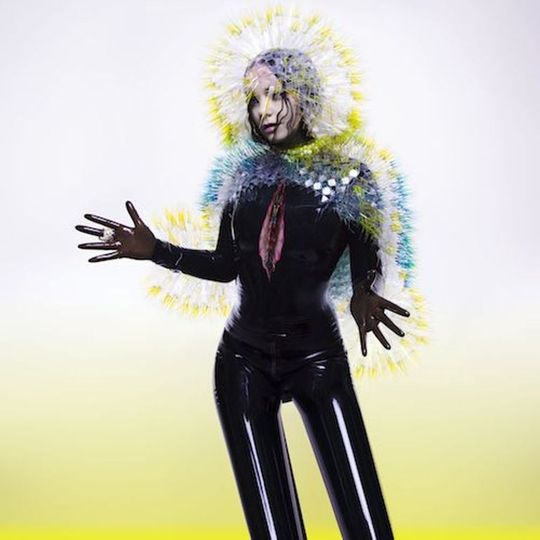 A long relationship ending feels like a ton of bricks crushing your chest, and the weight is time. The weight is every second you spent together, seconds you alternately feel were completely wasted, and are utterly, tragically irretrievable. The relationship, which with its in-jokes, personal body language, history and intimacy becomes a third being that mediates between two people. It needs sustenance, attention, support. And, inevitably, it dies.

That is to say, relationships are as much living beings as you or I, and if Björk tackled the biological world with her last album, 2011’s ‘media project’ Biophillia, on Vulnicura she applies the same forensic veneration towards the death of her relationship with long-term partner Matthew Barney. ‘Family’, the monolithic eight-minute-track at the heart of the album, is at once a requiem to the collapse of her home life (“Is there a place / Where I can pay respects / For the death of my family?”), and a prayer for relief from pain (“There is a swarm of sound / Around our heads / And we can hear it / And we can get healed by it”). That first line suggests music as a healing force, and here the music very much accompanies Bjork as the central figure of the album, the narrator and lamenter, dreaming her relationship back into life to understand it better and come to terms with its passing.

The album starts with ‘Stonemilker’, the most gut-wrenching and beautiful song Björk has written since Medúlla. It sets the album in motion with the line: “Moments of clarity are so rare, I’d better document this”. Her voice hanging on the ‘emotional’ in “Show me emotional respect” recalls the 'emotional landscapes' of 1997’s Joga. But whereas Homogenic was full of glacial beauty and reverence for the mystery of nature (“Emotional landscapes / They puzzle me”), Björk here turns her gaze onto the puzzle of inner landscapes: “Who is open / And who has shut up / And if one feels closed / How does one stay open?” Her music, with its swings between wild, soaring highs and crushing, intimate lows, has always been in thrall to emotional turmoil and excess, and to the idea that emotion has its analog in music, and nature - that the wild, dark mystery of all three things are somehow linked. Here the music and her emotional state are perfectly in step: The Haxan Cloak and Arca’s swirling production compliments the vocals rather than drives them, while Björk’s string arrangements accompany every lament, now luscious, now discordant.

On ‘History of Touches’ the stuttering production echoes the temporal stasis of the song, where Bjork, in the present tense, becomes acutely aware of the dying moments of the relationship as it happens: “I wake you up ... This is our last time together / Therefore sensing all the moments / We've been together”. Suddenly, “Every single fuck / We had together / Is in a wondrous time lapse”. If Björk’s last two albums were impersonal voyages of artistic license and collaboration, Vulnicura is deeply personal and so much more rewarding for it. That’s not to say it’s any more mainstream fare - the beats are still discordant, the lyrics more stream of consciousness poetry than structured songwriting.

Nevertheless, the sheer weight of its creator's emotional honesty holds the album together. Like the ‘Black Lake’ that she compares her heart to (“My soul torn apart / My spirit is broken”), the album spirals around the weight of her emotional loss, the record full of empty spaces, in the abstract production, in the longing strings, in the people and feelings absent: “Explore the negative space / Around my mouth / It implodes / Black hole”). If this is music as catharsis, the sheer length of the songs, and their wondering musings, make for a strange, intense listening experience. We feel Björk’s pain, but the music holds us at a remove, only rarely letting us in close with her. Maybe that’s part of the healing process - when something dies, when a period of our lives is suddenly lost to us, we need space to grieve and recover. If Vulnicura never truly allows us in close, it’s still a beautifully tragic view from the edge of the ‘black hole’. On final track ‘Quicksand’, Björk lets herself be propelled by an actual beat, and that feels like progress of sorts. A sense of time is recovered, and the fog lifts, if only for a few minutes.