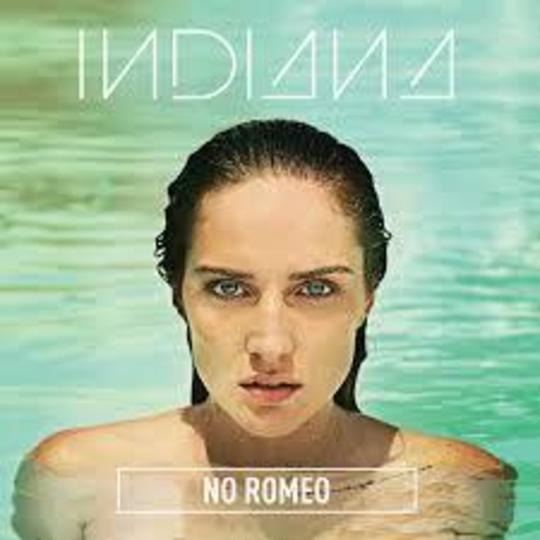 Nottingham-based singer-songwriter Indiana has had a steady rise that saw a deserved breakthrough in the form of top 20 single ‘Solo Dancing’, which might mean some have her pegged as a fairly straightforward pop star. And sure, she owes a small debt to Scandi-pop, and perhaps Robyn in particular, as indicated by a couple of thematic nods - ‘Solo Dancing’ is the most obvious, what with it being a parallel universe version of ‘Dancing On My Own’ and all. In contrast to Robyn though, Indiana isn’t crushed by her lack of a dancing partner, she’s empowered by it: “no point asking/‘cause I always dance alone.” There’s also ‘Heart On Fire’, which not only contains a direct lyrical reference to ‘With Every Heartbeat’, it also repeats ‘Solo Dancing’s trick of turning Robyn’s theme on its head - falling hopelessly in love rather than struggling to let go.

It doesn’t take long to discover that No Romeo has a far darker heart behind it, however - from the off, it’s clear that Indiana is not one to mince her words when it comes to former lovers. “My fury knows no bounds/my wrath will never end,” she seethes on ‘Never Born’, as the song stews in a mixture of Portishead-esque atmospherics and all-consuming malice before exploding in its final third. ‘Play Dead’, on the other head, is the very opposite - Indiana sounds crushed and defeated by the trials of love, sighing “I’m so tired of seeing red/so I play dead” over a backdrop of bleak and claustrophobic synths.

The album also continues its habit of defying expectations throughout. The title track ditches any thoughts of love or intimacy in favour of a protective cage of isolation, while ‘Calibrated Love’ contains the repeated lyric “I am the creator of blurred lines,” which seems strangely subversive in a post-Thicke world. The moment where Indiana truly shines is the minimalistic anti-pop of ‘Bound’, which sees her entangled in a twisted relationship (“This isn’t love/it’s dangerous”) - but whether it be emotionally abusive or a more literal depiction of BDSM, it’s clear that by the end of the song the tables have turned (“Was your creation/but now I’m in charge”).

And yet, the album suffers from feeling like less than the sum of its parts, particularly in its latter third. Songs that might perk your ears up if heard in isolation - the hip-hop-meets-operatic-pop of ‘Shadow Flash’ the shimmering, Metric-esque ‘Only The Lonely’ - somehow start to blur together into one pleasant but unremarkable pop sheen. Perhaps that’s less of a problem than it might have been in the past - the album is dead, or so some people would have you believe - but it still feels unfortunate, particularly when the record features some truly compelling moments. In Shakespeare’s play, Juliet fell in love with Romeo at first sight, and it seems fitting that No Romeo provokes the opposite reaction - it’s easy to admire, but difficult to truly fall in love with.