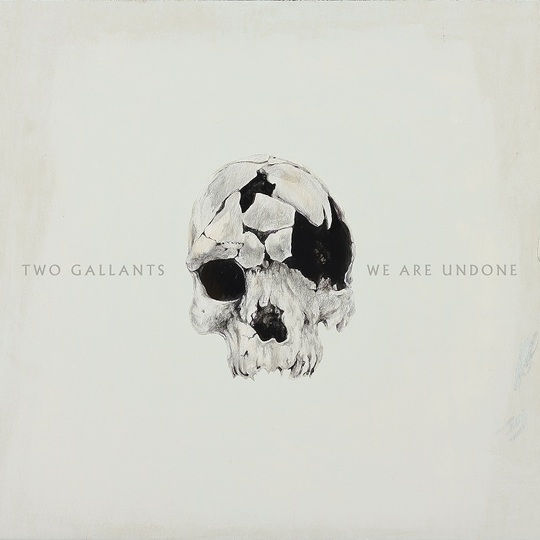 Remember when it seemed like the world would never get to hear another Two Gallants album? Those were tough times. The five-year-gap between the duo's self-titled LP and The Bloom and the Blight was excruciating, enough to make the wait for their fifth album seem like a drop in the ocean in comparison. It's true that We are Undone has come together relatively quickly, especially since Adam Stephens and Tyson Vogel spent a considerable amount of time touring its predecessor, but there isn't even the slightest hint of complacency about the ten tracks that make up the record. Indeed, there are genuinely inspired moments scattered throughout; it's hard to argue with the title track, which kicks off the album in bombastic fashion.

'We are Undone' is a bruising reminder that Two Gallants have lost none of their melodic heft, brought to life by Karl Derfler's spacious production. He's worked with the likes of No Doubt and Dave Matthews Band, but was also behind the mixing desk for Tom Waits's Bad as Me, so it's easy to see why Stephens and Vogel chose to work with him. The more upbeat moments on We Are Undone benefit from a full-bodied sound, with 'Incidental' racing through its 150-second running time with the sort of reckless abandon that would put most other duos of this ilk to shame. The album's most immediate moment comes in the form of the self-deprecating 'Fools Like Us', whose stomping drums and full-throated chorus of, "Fools like us just don't belong" are sure to make it a highlight of the duo's live sets for quite some time. There are darker things being masked by the major-key rock, as we've come to expect from Two Gallants by now, and the impressively maudlin 'Invitation to the Funeral' links up with 'Some Trouble' and the gut-wrenching 'My Man Go' to form a triptych of the duo's most desolate offerings to date.

This sudden shift from musical to emotional heaviness is unexpected, and no-one emerges from the detritus unscathed - unfortunately, not even Two Gallants themselves. 'Katy Kruelly' comes off almost as an afterthought, pared-down folk combining with some unusually clumsy lyrics to create something that's unsure of its place on the record and should have perhaps seen the light of day as something else. Thankfully, a full recovery is made on 'Heartbreakdown', whose inventive percussion and particularly mournful vocal are the key elements of the album's 'dark horse' track; it may not grab you immediately like the straight-up rockers further up the running order, but you'll know all about it when it does. 'Murder the Season / The Age Nocturne' moves from subtlety and atmospherics to muscular riffing and back again across its four minutes, before the album ends with the defeated-sounding 'There's So Much I Don't Know', its haunting a capella introduction giving way to the tale of a man who is very much at the end of his tether - a suitably crushing finale for a record that wears its broken heart on its sleeve. Stevens and Vogel have been playing together for almost 22 years now, if you can believe that, and We Are Undone is a fine addition to their catalogue.