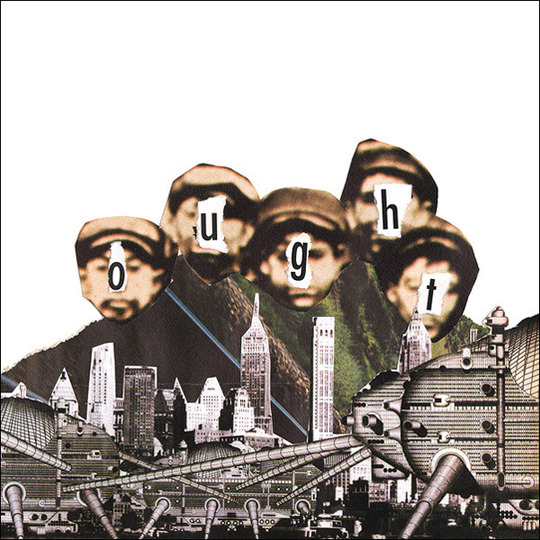 If you’re unfamiliar with Ought’s work then their latest EP Once More with Feeling, might not be the ideal jumping on point. That’s not to say it isn’t uniformly excellent - indeed it perfectly compliments the high standard of their recent output. But if you’re after a more cohesive introduction to Canada’s finest non-Canuck indie sensations, then you’d be better starting with their hugely accomplished LP More Than Any Other Day, released earlier this year to deserved acclaim. But this is a minor caveat. As these four tracks - which predate their most recent work and have been re-recorded specially for this release – continue to showcase Ought’s unique brand of intelligent indie; distilling what should be straightforward angular guitar pop into raucous, angst ridden rhythms and head-rattling post-punk jangles.

The EP’s clear standout is ‘New Calm Pt2’ a seven minute rabble rouser. “Everyone put your arms in the air/That’s the generally accepted sign of not having a care” yelps Tim Beeler with an arch wink, as furious metronomic percussion drives the song ceaselessly forward. Guitars crashing and oscillating into a sweat drenched sing-a-long. A warped party-jam fuelled by off-kilter dichotomies; Beeler breathless squawking lines like; “You and me now are dead inside!” over crescendos that feel dangerously alive.

‘New Calm Pt3’ follows this up in an entirely different mode, as a six minute cacophonous abstraction, that’s held together by little more than a low bass hum and recursive non-sequiturs, Beeler rambling about clear water, flying in dreams and the cycle of “things”, while the track floods with sprawling feedback loops and taughtly plucked strings. The result is a hypnotic experiment that touches the outer reaches of Ought’s sonic palette. A notable exception to their canon, which expands on what we can expect from them when they let the brakes off.

The EP is bookended by more standard - but by no means less sterling - offerings. ‘Pill’ opens with warm keys and subtle percussion, Beeler’s voice rising in the mix as his tone gradually shifts from hazy acceptance to drawling menace. “Give it to me!” he murmurs to unseen figures as the guitars rise and fall around him in sharp, anthemic unison. ‘Waiting’ - an almost instantaneous earworm - rounds out proceedings with a jittery rhythmic squall. “How long you been waiting?” Beeler pleads with possessed energy as the song descends into a shuddering death disco, deceptively upbeat hooks belying the song's sinister urgency.

Ought’s music holds undeniable echoes of the past, but their triumph is in a vitality of presentation. They transcend accusations of post-punk pastiche because they don’t make music that sounds like Television or Talking Heads, they make music that sounds like the first time you heard Television or Talking Heads. And if these four tracks prove anything, it’s that even when working from off-cuts, the band continue to thrill with their unrivalled promise and exuberance.