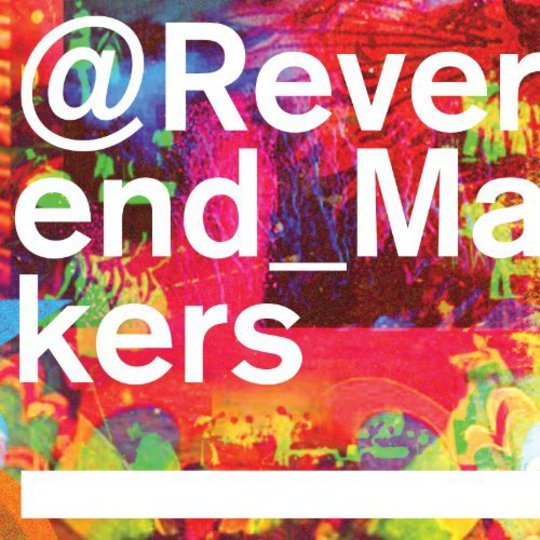 The media blackout’s over. The curtain’s raised. Settle down and prepare for the enlightenment. Jon ‘The Reverend’ McClure takes centre stage. That little blue bird you’ve been seeing at the bottom of web pages? Hold tight – it’s called Twitter mate, and the Rev’s onto it. Except he’s not just onto it. He’s over it, he’s through it, he’s past it, he’s done it – now he’s gonna serve some home truths directly into your ear canal about it. This is 2k12 130mph shit. Hold onto your laptop ‘cos this goes deep.

‘The songs the little situations I see living in Sheffield in 2012. [sic] Nothing seems to sum up the times we live in than the @ symbol’ says McClure. And make no mistake, the Reverend has King Konged it to the top of his steeple and he ain’t too keen on the view. So here it comes, a cluster headache wrapped in a nailbomb beamed directly from the evacuated bowels of Conor McNicholas. It’s indie-step. No it’s indie-rave. Nah fuck it, it’s the Reverend and The Makers and they’re back after a three year hiatus. Can I get a hell yeah?

‘Bassline’ is the first single. Fossilised in amber since the Calvin Harris era and now resuscitated by the resurgent McClure, he’s come out fighting – "All the money's spent / waiting for Friday’s highs / we just stumble around / in the 9-5." Not since Dolly Parton has the daily grind been made to sound so vital. It’s Hard-Fi for the hashtag generation, a Berlin Wall of sound collapsing through your speakers. Drop this in your Grandma’s crib and give her some cheap pills to munch on, ‘cos this is as real as it gets. Don’t take my word for it, here’s the press release - ‘Fish and chip suppers, hedonistic living, all night dance-music in dank semi-legal cellars, and the comedown – all soundtracked by great guitars.’ You got that? Mashed-up music for mashed-up times, so hold your hands aloft and unite as one. In. Rev. We. Trust.

Like a wasp trapped under a glass McClure holds dominion over every square inch of his miniaturised world. You know how it is, you work, you go out, within minutes you’re sloshed and it’s all over FaceyB. What’s your bird gonna think? How long before the boss decides it's game over? Team Reverend says it’s following in ‘the grand tradition of Pulp and Arctic Monkeys’. Similar to when you can’t be arsed to get out of bed all day as you’re ‘following in the grand tradition of John Lennon.’ In any case it's a risky comparison to make when you’re churning out guff like ‘Out Of The Shadows’, a step-aerobics dance track replete with some vintage playschool rhymes:

"I’m coming out of the shadows / I’m coming into the light / I’m stepping out in the sunshine / cos it’s the end of the night".

If Cocker’s a linguistic Maradona then here’s McClure hoofing the ball over the fence after doing 14 imaginary Cruyff turns in his backyard. The whole album’s a lonely celebration in an empty stadium. Everyone else has packed up and gone home, but the Rev won’t let go of the mic.

It’s weird enough when a man in his thirties clutching a can of Tennant’s gatecrashes a teenage house-party; when that man is throwing said house-party under the guise of a youth movement then it's probably time to cordon off the area and shut the whole thing down.

Alas, it goes on. Songs like ‘Yes You Do’ and ‘What Goes Around’ offer some respite, a chance for your tinnitus to blossom, if you will. Precious moments until your torturer comes back from his fag break clutching a fresh pair of pliers. Then its time for ‘Noisy Neighbour’, a song so bad that I left my girlfriend and had my house demolished after hearing it. ‘Warts N All’ is alright, like a 20p coin glistening in a compost heap, but it's preceded by ‘Depthcharge’, a song of such throbbing tedium it makes Chase and Status sound like Tchaikovsky.

Many demons are slain at the altar of the Reverend in the course this album – wit, eloquence, incisiveness and originality to name but a few. It’s kind of a shame because you do get the feeling that here’s a guy putting his heart into something he really cares about. Unfortunately the feeling’s unrequited, and in the end you might just feel for Jon McClure - spokesperson for a generation who remain unaware of his existence.