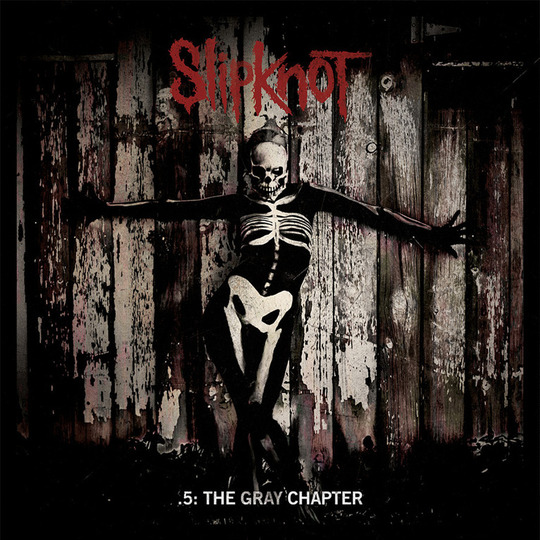 The loss of Paul Gray haunts Slipknot's first record in six years. As it should. Up until his sudden death in 2010, Gray served as bassist, key songwriter and, in a band that aggressively embraces the idea of extended family like few others, brother. Throw in the firing of drummer Joey Jordison last December and the structural damage looked beyond repair.

As it turns out, the Slipknot of 2014 are a reinvigorated unit. Pain and angst are still worn as badges of honour, but there's considerable weight attached now. .5: The Gray Chapter wears its scarred heart proudly on its sleeve from the opening seconds as Shawn 'Clown' Crahan intones that 'XIX' is not a song for the living, but for the dead. Fittingly, it resembles a funereal dirge, the march numb and naked as Corey Taylor takes point, delivering the first of many on-the-nose lyrical exchanges of an hour that features his best vocal work in a decade. His words are far from subtle, but they never were, really. At his best, he flits from guttural growl to melodic inflection with a grace not usually associated with thrash metal.

Slipknot's fifth volume finds Taylor indulging in plenty of both. There's a conviction in his voice that has been absent for some time. It helps him sell lines like "The world will never see another crazy motherfucker like you/The world will never know another man as amazing as you" as found on the manic 'Skeptic'. Not much to look at on paper, perhaps, but there's ample life under Taylor's collar now, and he makes you feel his years. .5: The Gray Chapter stands tall; not just as tribute, but as vital catharsis. The biggest tribute paid across the album is that Gray's instrument plays a major role. For their part, those new to the mask - all but officially confirmed as Krokodil guitarist Alessandro Venturella and former Against Me! drummer Jay Weinberg - immediately make their mark.

So too does this latest chapter. Stylistically, it's a blend of all four previous albums but the nods are most fervent in the direction of Iowa and Vol. 3: (The Subliminal Verses). 'XIX' is a black mirror for 'Prelude 3.0', 'Sarcastrophe' wraps itself in the same unforgiving barbs as 'People = Shit' while the alternately dreamlike and nightmarish 'Killpop' could sport the name 'Vermillion Pt. 3'. 'The Devil In I', meanwhile, reveals itself as one of Slipknot's most accomplished dark pop songs. Strung together alongside 'AOV' and the aforementioned 'Skeptic', they form a pretty unimpeachable barrage.

Sadly, bloat and repetition creep in, not dissimilar to the sort that held back 2008's All Hope Is Gone. Though the production is a cut above that record, it might have been wise to employ a more ruthless editor. Rick Rubin would have been ideal. Despite Taylor's professed annoyance that the producer was largely absent from the recording of Vol. 3, it can't be a coincidence that the resulting album is by far their finest work. Though not infallible - Rubin argued that the chorus to 'Before I Forget' wasn't catchy enough and argued for its removal - he likely would have trimmed the fat where required.

.5: The Gray Chapter is hampered by a flabby midsection that it simply doesn't need. It begins with 'Lech', a fairly by-the-numbers track that only gets truly interesting when it eventually bursts into Dillinger Escape Plan mode. 'Goodbye', a lumbering mix of balladry and stadium metal, stumbles. Next comes 'Nomadic', which, while enjoyable, boasts a chorus that is basically a re-run of 'My Plague'. The lull finally subsides with 'The One That Kills The Least', a humdrum effort that belongs on a Stone Sour record.

Momentum is regained quite spectacularly with 'Custer', a ferocious battle that boasts one of Slipknot's most anthemic and violent choruses to date. Taylor is magnificent here, paranoid and powerful in the same thunderous fashion as Kanye West on last year's 'Black Skinhead'. Production plays a part, allowing him to burrow right into the pockets of your ears when he feels the need. 'Be Prepared For Hell' is little more than an interlude but it also digs deep. A case is made for the previous dip in narrative in the form of 'The Negative One'. Devoid of context, it's a well-constructed, vicious yet somehow blissful sledgehammer blow. Arriving towards the end of Slipknot's heaviest hour, it's a moment of purity. The road may be a little uneven, but they have earned the right to pave it as they wish.