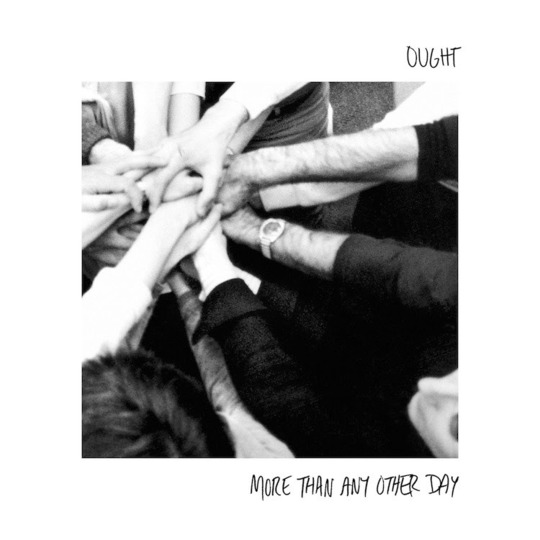 It’ll help to begin by saying that Ought hail from a tiny Montreal scene based in Brasserie Beaubien, an ailing bar colonised by politically wired musicians. ‘The Bras’, now abuzz with amateur jazz and socialist noise rock, hosts graduates from the city’s illegal loft party circuit (not unlike the one Grimes, Doldrums and their introvert clan popularised), among whom Ought, hip postpunks and freshly minted Constellation-signees, are but one twinkly-eyed specimen. Yet their debut album is a deeply earnest cry of moral anxiety, a brain-rattling melodic force, and a more or less ‘life-changing’ primer on how to stay sane in sticky times. What happened here?

Quite a lot actually. It begins as the four-piece, having met at university, form during a watershed moment for Quebecois students. Via mass demonstration, shocking police brutality and sweet communal retribution, the 2012 protest against rising tuition fees blazes into the international conscience. Yet as shadows fall over Quebec, you’re forgiven for feeling sort of grimly enchanted. Bands like Broken Social Scene, Tegan and Sara and the Dears - hardly publicity fiends - yell, blog and tweet from the rooftops, while Arcade Fire endorse the movement on Saturday Night Live. It goes without saying that all care deeply and sincerely, a bleak reflection on London musicians after the 2011 riots.

It’s at least partially true, though, that none of this directly occupies More Than Any Other Day. Instead, two years on the twentysomethings engage in a righteous kind of party music. This turns out to be a shrewd move. For all its interior turmoil, one quirk of psychosocial dread is that it tends to manifest in relatively mundane circumstances - low-level confusion, pleasant exchanges on public transport, hellacious night terrors set in tall supermarket aisles - and it’s on these perversely delightful morsels that More Than Any Other Day feasts.

The best song on More Than Any Other Day is almost the title track. It’s called ‘Today More Than Any Other Day’, which is practically the same thing. In a tragicomic way, it has pretty hilarious lyrics. “And today, more than any other day”, Tim Beeler cries, “I am prepared to make the decision between two-percent and whole milk!” Mysteriously, this feels like exactly the sort of thing I’d been waiting to hear.

As mentioned, the music throughout is categorisable as postpunk, though side B possesses the arid splendour for which Constellation Records is known and loved: there’s a sense of borders crumbling as the anarchic energy overspills. Still, casual listeners may consider Ought derivative, but here’s why they’re wrong.

Lyrically and tonally, More Than Any Other Day is by and large very listenable, which isn’t commercial capitulation but rather a rejection of rejection. Steeped in the postpunk aesthetic, a well-established rock style that nonetheless remains richer and deeper than any other in formal possibilities, this is a record that conflates doubt and optimism while at surface remaining aggressively articulate.

You can align it with metamodernism, a cross-form phenomenon recently fomented in Europe and North America that applies post-postmodern theory to middlebrow art. Marrying self-aware humour and ‘spiritual exultation’, the movement aims to pierce our thin ironic forcefield and recover a vulnerability we never really lost, while also freeing phrases like 'life-changing' and 'spiritual exultation' from the tyranny of scare quotes.

The underlying premise is that, thanks to their overexposure to manufactured sentimentality, the best (well, near-best) minds of our generation are saturated in a cocktail of cynicism, fear and irony, the effect of which elixir is that they proudly despise authenticity. In theory this creates a species of highly educated emotional burnouts, where the informed music fan (for example) sneers at unfashionably direct and sentimental songwriters - regardless of their real-world merit - as well as the simple souls lionising them. It seems fair to suggest that at least 93 per cent of Drowned in Sound visitors are occasionally guilty of the above, and that this is almost completely normal.

But here’s the payoff: although Ought meld proto-hipster touchstones like Richard Hell, the Modern Lovers, Shellac and Talking Heads, they completely reject snideness. In fact, it all translates with such empathy and euphoria as to suggest something subversive to modern indie, that hipness isn’t a quality to patronise or covet, and that maybe our resistance to being pigeonholeable or passé is precisely why we’re so confused and lonely.

“Today, together, we’re all the fucking same” - ‘Today More Than Any Other Day’

Since social upheaval tends to limit one’s patience for symbolism, it’s no surprise that the finest lyrics on More Than Any Other Day are lucid and straightforwardly compassionate. While corporate retro-rock comes off simple for simplicity’s sake, Ought take care to bridge the waters between anthemic songwriting and preachiness. Even so the formula could play out fast, but there’s something else in the mix. Behind the Godspeedian lowing of songs like ‘Forgiveness’, Beeler’s vocal threatens to vanish like dust in the stratosphere. But it never does, for it’s quickly apparent that he possesses a natural élan, an oratory quality pitched between David Byrne and Steve Albini that manifests everywhere from ‘The Weather Song’s aggy bark to the darkly conspiratorial ‘Clarity!’

It shouldn’t be forgotten that these are smoking tunes, too, all performed with a shoutalong levity that defies solipsism and oblivion. This is a recovering cynic’s way to survive in the world. Part of the reason Ought fascinate so relentlessly is that fleeting joy of hearing dense sonic headaches charge and intensify, only to collapse into a chorus with all the modern complexity of an AM radio. That’s another trick of More Than Any Other Day: the songs don’t reject technicality, they just disguise it. They’re simple for complexity’s sake.

There are humour, brutality and directness to More Than Any Other Day which elevate Ought to spokespersons for a countercultural, anti-dream pop movement in post-Arbutus Montreal. But more than stubborn renegades they’re actually arch humanists with a soft shining centre, masters of a social commentary that, while imperfect (the metaphor of narcotic experience as spiritual release feels slightly overplayed, eg) is especially rare in indie rock, for it stems not from guilt or disgust but hope. Too witty for punk, too industrial for art-rock, the album’s masterstroke is to open an escape hatch from postmodern recursion and illuminate a long road home paved with social awareness, rigorous self-doubt, redemptive communal empowerment and - today, together - an explosion of spiritual exultation, heard and felt en masse.