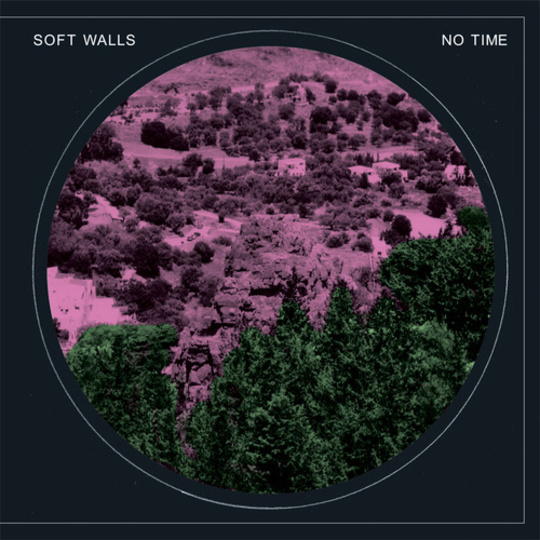 Not content with playing in fellow Brighton experimentalists Cold Pumas and running a label (Faux Discx), Dan Reeves also makes music under the solo guise of Soft Walls. His 2012 debut The Soft Walls hinted at future possibilities, and the follow-up No Time delivers in every conceivable way.

Constructed at home and in the Brighton rehearsal space he uses for this and his other project, No Time is the conclusion of several hours' writing, recording, rewriting and then re-recording again. Nevertheless, his pursuit of sonic perfection has paid off, with a little help from his friends MJ of Hookworms and Nottingham-based Joe Caithness (on mixing and mastering duties respectively).

There's a recurring theme to No Time's prognosis, namely fear and loathing augmented by the realisation youth isn't eternal after all. But it's Reeves' obvious knack of fusing errant psychedelia with driving rhythms with a lo-fi veneer that stands out. Whereas No Time's predecessor introduced Reeves as a sonic pioneer in the making, this serves as a public service announcement: His time is now.

With vocal styles ranging from the Gregorian chant of opener 'Won't Remember My Name' to the haunting whispers that permeate much of No Time, it's Reeves' aural palette that rises to the fore here. Each of its ten pieces segues effortlessly into the next, mostly propelled by a Spector-esque drum sound not too dissimilar to the one Bobby Gillespie perfected with The Jesus & Mary Chain around the time of Psychocandy. 'The Big Nod' is a prime example of Reeves' structured approach, the aforementioned regimented beats delicately complimented by a collage of guitars reminiscent of Stereolab or The Shamen's earliest recorded ventures prior to their better known dancefloor days.

'Never Come Back Again' takes No Time into another dimension, its motorik-style beat married to an obtuse bassline accentuated by Reeves' trademark under-the-breath vocal. Perhaps the closest comparison at this point would be James Chapman and Maps, but then by smothering No Time with reference points it feels like we're doing Soft Walls a disservice.

'Early In The Day', a short, ambient drone-heavy interlude gives way to the title track which sees Reeves in stripped down, laidback mode for the first time on the record. However, due in no small part to the layered production techniques employed here it still manages to sound huge and captivating.

Normal service is restored on the pulsating 'All the Same', which could be used to accompany a movie featuring Richard Fearless driving a high speed train along the banks of the Rhine were it deemed possible. Similarly, 'Guided Through' revels in a mountain of echoes, distortion and delay while subtly administered keys and the flicker of a tambourine make it sound like an artefact from the Sixties suspended by time travel.

There's sinister overtones within 'Foot Of The Stairs's brooding psychosis. Harshly orchestrated guitars collide menacingly with crushing snares while Reeves' hushed intones tell their own story. However, the best is saved until last. Once again favouring the Phil Spector approach of utilising cavernous drums up front and letting everything else build around them, 'Transient View' grows organically into a lolloping mantra akin to Suicide's 'Keep Your Dreams'.

Adventurous and bold yet distinctive in execution, No Time represents Dan Reeves' most essential body of work to date.