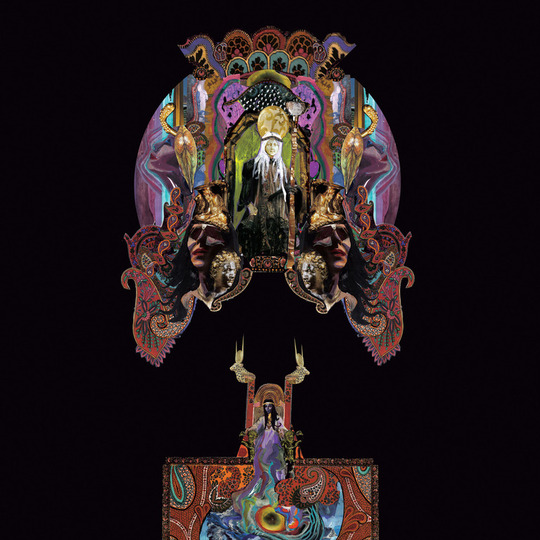 Near every musical oxymoron possible has been done by this point, but 'beautiful sludge' still feels new. Many a black metal band has by this point, in the wake of Liturgy, Deafheaven, etc., leapt from menacing noise to a more heartbreakingly emotional sonic assault, but it seems that few bands have trodden the opposite path and fused post-rock structures with ear busting sludgy tropes. USA Out of Vietnam do just that, taking their architectural and emotional cues from post-rock, but playing them like an outright stoner band. The compressed piercing kick drums, the monolithic filthy bass chords, the deafening relentless fret-run histrionics; it's all there. The key difference is in the attitude. The album's songs are all circa ten minutes long, sampled sociopaths waxing lyrical adorn the interludes, and the major-minor key jump is abused with symphonic heartstring-tugging confidence; they write like a post-rock band, but they play like an Eyehategod, a Sleep, or a Melvins in full swing.

USA Out of Vietnam are a fresh new quartet from the spiritual home of gnarled North American post-rock, Montreal, yet despite this full-length being their debut, these guys recorded Crashing Diseases and Incurable Airplanes at the Hotel2Tango (a studio previously home to countless modern classics including The Arcade Fire’s Funeral in addition to GY!BE and most of the Constellation records output) and are releasing it on the London-based Aurora Borealis label. Both are pretty outstanding endorsements, and Aurora Borealis has arguably been something of an underground head-hunter of late, having put out débuts for both The Haxan Cloak and Grumbling Fur, as well as early non-Sunn stuff from Stephen O’Malley (KTL & Ginnungagap). Furthermore, some fifteen guest musicians flesh out the band’s sound here, with tracks getting stacked and bounced as high as some Spector or Lynne joint. Grandeur is at the core of the USA Out of Vietnam sound, and it’s pushed so hard (and believably), it’s easy to see how they’ve got such weighty patronage already (that, and the all-important Québécois cred).

The meeting of post-rock and sludge metal is hardly a proper gambit per se (we all love Isis, Neurosis, etc), but the vocals throughout the album are a really confusing spanner in the works. Far from the guttural screams of modern metal, but similarly far removed from the desperate in-the-round folky chansons of Silver Mt Zion, most of these swooning choruses are more reminiscent of some college dorm tear-jerking Bon Iver track than anything else, seemingly superimposed on to the sludgy angry backdrop.

‘Archangel’ opens with a vocoder line straight from the gentillesse of Mogwai's 'Hunted By a Freak', lulling the listener into relative comfort before unleashing crushing slow-motion stabs of lengthy doomy riffs. This cycles on, with the drums gradually building and ultimately punctuating a peak as the song switches from brooding to headbanging and the aforementioned multi-tracked chorals kick off. This essentially crescendos and repeats as a coda for the remainder of the song's ten minutes, the floor eventually dropping out, cutting the instruments at and leaving nothing but the spiralling harmonies behind to play out.

The briefest offering, the eight-minute ‘You Are A Comet, You Are On Fire’, is perhaps the least structurally languid, and most immediately indebted to GY!BE. Moving swiftly through an introduction of zonked out distant guitars, keyboard gibberish (is that a MIDI whistle?) and a drum machine, the track launches into sweeping crunchy riffs and swirly synths, that stop-start throughout for dramatics, at one point stopping entirely for a spoken word interlude about self-realisation and visions of ghosts, and ultimately climaxing into the stratosphere with trumpets included like liberally added salt to further enhance the experience. ‘Leg of Lamb’ is perhaps the band at their most repetitive, with a softly-sung introduction floating across pianos and mellotron vibraphones, then basically bursting into rockout mode, and revolving around the same chord basic chord movement for thirteen minutes, peaking and troughing to the best of their ability, with the obligatory toned-down exploratory middle section. It’s also the album’s least overtly metal moment, and most overtly uplifting.

To describe USA Out of Vietnam as true originals would be a bit of a gaffe, as much of Crashing Diseases and Incurable Airplanes is in many ways simply a compilation of the best bits of both post-rock and ‘lengthy emotional metal’. From the long, grandiose gibberish of the titles (and band name), to the skyward-reaching dynamics, it’s all very familiar. It’s perhaps their marriage to feature-length songs, pushing them almost all past the ten-minute mark, that seems perhaps the most contrived of the element, as if shaving songs down below the double figure mark would somehow lessen their sheer strength. They can write stonking great headbanging riffs, and sing sweeping epic choruses, a pairing almost no other can pull off - but for want of a better term, they go on unnecessarily long, to the point of diluting the music’s inherent power. All that having been said though, their heartfelt conviction, and the album’s psychedelic marriage of styles makes for a pretty damn good listen - and even mimeographed grandeur can make the hairs on the back of your neck stand on end.