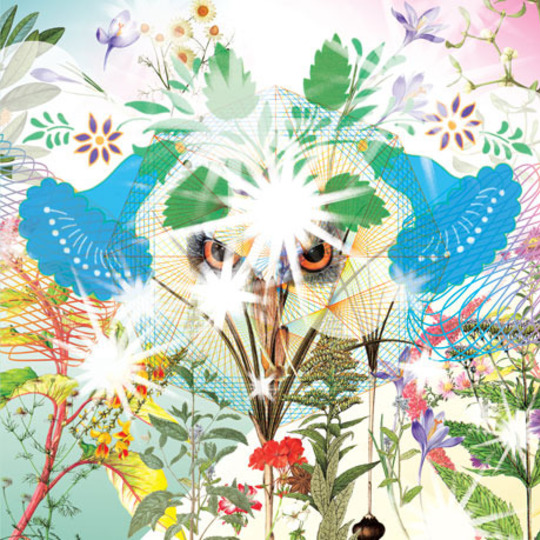 One frustrating thing about Boredoms is that they don’t really release records anymore. Apparently this is because their live shows have become so ambitiously colossal that they would be completely impossible to capture on vinyl/CD/cassette/digital file in any half-decently representative way. For example, their set(s) at ATP 2012 featured five drummers and 14 guitarists conducted by one Yamantaka Eye in the middle bashing a seven-necked guitar with a big stick and yelling his blessed head off. The show was described by David Yow as 'the best fucking thing I have ever seen' and it is frequently cited on certain opinionated music message-boards as one of the best gigs ever performed.

Boredoms’ excuse doesn’t quite cut the mustard because a band’s recorded output doesn’t have to precisely recreate their live sound. There’s no reason why Boredoms couldn’t put out simpler music releases in the vein of their last couple of albums, Seadrum/House of Sun (2004) and Vision Creation Newsun (1999), while Boredoms Live continued as a different kind of beast.

Anyway, thankfully OOIOO do continue to release records. OOIOO are the main side-project of Boredoms drummer Yoshimi P-We Yoshimio. She has recently announced that we henceforth refer to her as ‘Yoshimio’, which is Yoshimi + circle, the circle being 'infinite and elusive'. Speaking from experience, it truly is an awful lot of fun to have circles in your name, but I’d advise having two ‘o’s next to each other because then you can put a dot in the middle of each and a curved line underneath so that your name looks like it’s got a face in it (tip: don’t forget the mouth or it just looks like boobs).

In some ways Gamel is OOIOO’s most Boredomsy album to date. It feels like one long composition (albeit a playfully schizophrenic one) that works best when experienced in a single sitting rather than heard in snapshots on iTunes shuffle or because every now and then you have to pause it to turn the sound up on a youtube video of a cat playing a harpsichord. Although more minimalist and less dense than both Boredoms’ live performances and their recorded output, Gamel shares something of the powerful psychedelic spirit of Vision Creation Newsun. And much like Boredoms’ music, its majesty is virtually impossible to describe using mere words selected from the English language and typed into a dusty laptop.

Inspired by Indonesian gamelan music, Gamel is loaded with hyperactive percussive sounds made with gongs, metallophones and xylophones alongside the usual OOIOO weaponry of drums, guitars, chanting voices and crazy effects. The near-ten-minute opener ‘Don Ah’ kicks things off with some spiritual “aaah”-ing and jubilant plinky-plonkery which are then joined by the belting of drums, the whacking of guitars, and the zapping of laser noises. The vocals get gradually crazier. After about seven minutes the track gives way to a fresh section which sees the group shouting something that sounds like “three” or maybe “tree”. It’s got a kind of hot and torrential cyber-rain-forest vibe. The hypnotic ‘Pebarongan’ is slower and more minimalist, though speeds up towards the end after a cool guitar line swaggers up to make things a bit less Steve Reich and a bit more scuzzy. ‘Gamel Ninna Yama’ is furnished with Melt Banana effects, breaks into a short blast of punk rock, and then transforms into something more tribal. ‘Gamel Uma Umo’ rattles along like a more optimistic, double-speed Liars, perhaps if they were wearing Bermuda shorts instead of grey suits. ‘Gamel Kamusa’ is Sun Ra arm-wrestling with Rhys Chatham over whether their collaborative ensemble should play snake-charming horn blasts or smoother noir soundtrack stuff. ‘Jesse Testa’ is fast and upbeat, its exuberant incantations backed by guitars that sound a bit like a metal elephant having a sneezing fit. ‘Kecupat Aneh’, meanwhile, flaunts a Sun Araw-ish Not Not Fun psych sound. It’s fun, almost poppy, with occasional jazz-punk blasts which are a little reminiscent of early Boredoms’ hectically confrontational compositions.

Initially overwhelming, Gamel is a gloriously bonkers concoction of flavours that turns out to be extremely delicious indeed. Like Heston Blumenthal’s food. I imagine. I’ve never sampled it. Frankly, I won’t be visiting any of his restaurants until he changes his name to Hestoon.