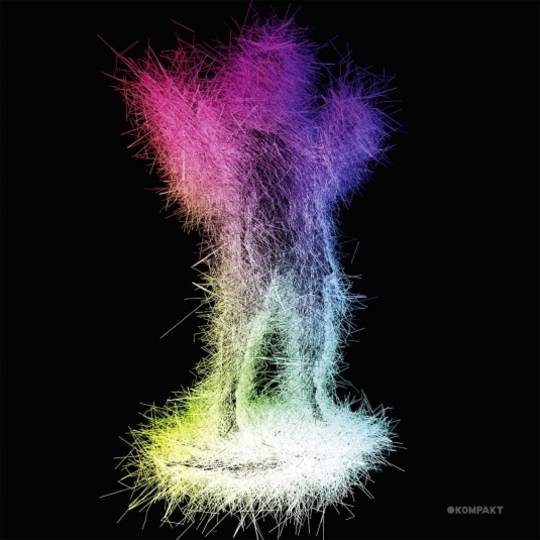 The production is crisp, snappy and crystallised, designed for perfect digital playback, a complete turn around from their dusty analogue 'Polyesterday' origins. GusGus started out almost 20 years ago as a 12-strong Icelandic troupe riding the smoke trails of trip hop, signing to cult indie label 4AD. Since then they have gone through several incarnations and split offs, 'Gollum's Song' singer Emilíana Torrini was a member in the beginning, they have experimented with different electronic styles and landed themselves on planet Berlin via Kompakt with a unique synth house hybrid of sound. Throughout this time two members, Stephan Stephensen (aka President Bongo) and Birgir Þórarinsson - fresh from synth programming John Grant's brilliant 2013 acclaimed album Pale Green Ghosts - have remained constant and emerged as today's face of GusGus.

Mexico is an exploration of electronic textures and rhythms, attentively laced with properly thought through, meaningful lyrics and gratifying vocals. There are four stand out tracks here, which all indicate that GusGus continue to epitomise the art of a well-sculptured yet off kilter pop song. Starter 'Obnoxiously Sexual' sets the tone for the album, with a pulsing organ spread over a web of tinging hi hats, giving way to a classic kick drum/vocal combo that turns into a sweeping chorus that lifts the listener into a climatic emotional whirlwind 'obnoxiously sexual, who do we think we are, come and behold its a fight with limits of consummates with my spirit distorted'. Other songs that match this level of songcraft and pure anthemicness includes first single 'Crossfade'; 'Sustain', which bubbles up the Eighties tube, 'Airwaves', which builds from 4/4 floatiness to beat solidification that soon oozes into another chorus that wafts over like fruity vapour from an e cigarette.

The rest of the album has its moments, though mainly it seems like a chance for the GusGus gang to showcase what other electrified trickery they can muster. 'Another Life' exemplifies this with a pitchshifted male vocal down to Barry White low but contrasted further into the song with spritely soulful female vocals. 'God-Application' explores nu soul breakbeat territory that Jamie Lidell would be proud of. Then there is the pure instrumental of title track 'Mexico'. And then it ends on a bit of a downer 'This is What You Get When You Mess with Love' taking the listener through a sombre synthy process closing down proceedings with a show of disgruntlement expressed in a craftily creative way, but no reason why it should because generally the album keeps a neat balance. Between pop songs that keep the listener actively tuned into being moved in the melodic realm and exploratory technological musical flarings, Mexico does its thing properly and with style.