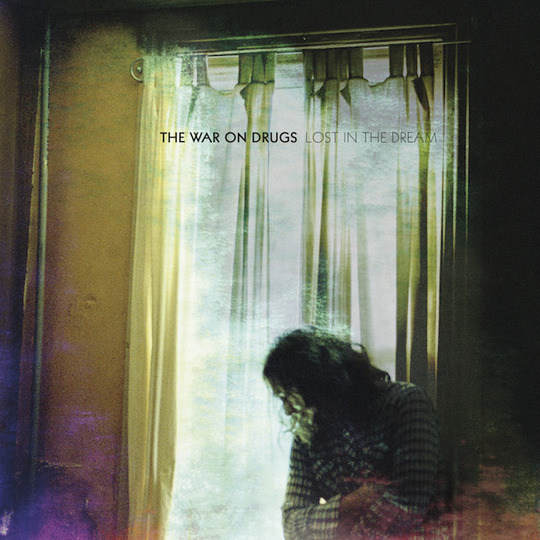 Mid-February, this album arrives, as England soaks in floodwaters and we start to wonder if we’ll ever see land again, let alone summer, and it’s a challenge for any band that isn’t Mogwai to appropriately match the national mood. Rain hits on rain and bow windows swell and we just start to take it for granted that the ground beneath is going to disintegrate, that skies are supposed to be the colour of bruising and that John Wyndham’s The Kraken Wakes should probably be a set text from now on. Most of us haven’t bothered opening our curtains this year.

Quite the challenge then for The War On Drugs, whose sun-dappled Americana lends itself to long summer days and wide open roads, to cinematic montages of campfires and campervans and people everywhere just laughing: music can transport us, yeah, but surely not that far. That’s just expecting too much from an hour of songs.

But it does: of course it does. Just like Slave Ambient and Wagonwheel Blues before it, Lost In The Dream is an instant salve to the shittiness of modern life, an album that would sound as though it could have been made anytime in the last five decades were it not so immaculately produced, recalling Dylan and Springsteen and pretty much all of Almost Famous without ever descending into pastiche or mere homage. Guitar breaks soar and harmonicas wail and lyrics tell of "setting my eyes to the wind", but somehow the cliches don’t seem worn and tired but utterly authentic, as though we’re encountering them for the first time in that first great flush of musical exposure before the cynicism and the rot kicks in and we start reading Vice.

'Just to not reinvent anything' said mainman Adam Granduciel recently when asked what kind of record he’d wanted to make, and he succeeded - there’s nothing really new here. But that’s not the point: Lost In the Dream is familiar in the way that childhood is familiar, warm and fuzzy and blurred out at the edges, the colours running and the memories indistinct. The ten songs here do much the same, melding into one another in a haze of reverb and sustain, of chorus highs and widescreen ambience, at times rambling and meandering but never aimless.

Nine minute opener 'Under The Pressure' pretty much sums the album up in microcosm, epic and sweeping and driving for two-thirds of its length, languid and detumescent for the last, guitars and drums and pianos traded out for synths and sequencers as folk-rock gives way to shoegaze. There’s quite a lot of shoegazing here, in the spaces between the chord shifts and Granduciel’s slightly weary poetry - indeed, there’s a whole track of it in 'The Haunting Idle', breathing room between the heavyweight balladry of 'Eyes to the Wind' and 'Burning’s pacey catharsis.

They’re atmospheric if unmemorable, these sections, but an understandable shade given the glare cast by anthems like 'An Ocean In Between the Waves' and first single 'Red Eyes', one of last year’s strongest cuts and an unimpeachable display of musical verve and songwriting balls: between its sweeping guitars and arms-up euphoria it rides the knife-edge of Bon Jovi and comes out miraculously unscathed, carrying any doubters before it in a rush of sweat and discarded inhibitions. Disappearing slows the pace, a meditative trance of washed-out vocals and whale-song guitars, fading to black over seven minutes.

Granduciel has said that the best place to listen to this record is alone in your car, driving at night. Having tried this I’d disagree: Lost In The Dream is an album for drifting away to, for switching off and waking up somewhere else, somewhere better, and that’s just not advisable from within a ton of metal propelling itself along tarmac at speed. It’s the kind of record that should come with a warning label, actually, both for that reason and because once it’s done, once 'In Reverse' has played out and the haze has lifted and the colours have all drained away, our world can’t help but seem a little desaturated by comparison.