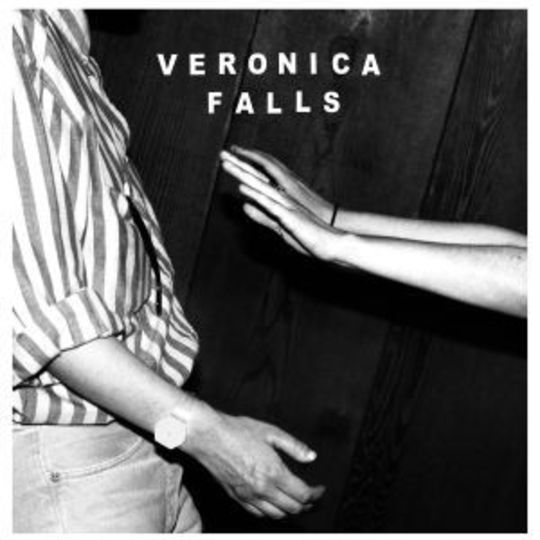 There's an old adage that says if something isn't broke then why fix it. Whether Veronica Falls pay much if any attention to such idioms is debatable, but having announced their arrival in style with 2011's excellent self-titled debut, it's a case of business as usual here. Which is just as well, when all's said and done.

Similar in structure, lyrical themes and musical reference points to its predecessor, Waiting For Something To Happen is nevertheless a mature - if not quite as immediate - progression. While Veronica Falls may have been heavy on traditional three-minute (yes, I dare say it) POP singles, there's something more quintessentially romantic going on here. Take recent 45 'Teenage' for example, which seems to depict the final straws of a once-healthy relationship. "Driving late at night I let you listen to the music you like" insists Roxanne Clifford over a melody that's part Grand Prix-era Teenage Fanclub, with a dash of first album Byrds thrown in for good measure. Having long been a staple of the band's live set, there's an urgency about it to rival anything off their widely acclaimed first record. Even when Clifford delivers the crushing "What are you gonna do, if you're looking for someone new?" as the final verse draws to a close, 'Teenage' stands proud as Veronica Falls' finest three minutes to date.

Bursting with deftly polished harmonies, guitars that fizz and jangle in and out of focus and tunes all wrapped in a timeless veneer evoking the past five decades, Waiting For Something To Happen makes a mockery of the so-called difficult second album syndrome. Opting to go with celebrated East London producer Rory Attwell appears to have given Veronica Falls fresh impetus here. If anything they've become more prolific as songwriters, its 13 pieces carrying a weight of mixed emotional baggage.

Chirpy opener 'Tell Me' takes the garage pop template by the horns, Clifford and fellow guitarist James Hoare's incisive harmonies rising to the fore from the outset. Likewise with album midpoint 'If You Still Want Me', its delicate charm at odds with a tendency to occasionally delve into more abstract waters. Meanwhile 'Shooting Star' references Nirvana's 'All Apologies' (in melody at least). Reflective yet pulsating right through to its evocative climax, it highlights another finely tuned string on Veronica Falls increasingly accomplished bow.

Indeed, Veronica Falls' maudlin tendencies are accentuated throughout Waiting For Something To Happen. More importantly, such introspective observations make for some of the record's most notable moments. "If you don't care now, you'll never care" cries Clifford on the breezy 'Broken Toy', a song that recalls the likes of The Primitives, Shop Assistants et al, by nature if nothing else. 'Everybody's Changing' offers a more downbeat perspective, its narrator declaring "I remain the same" in reticence.

Of course there's something quite endearing about a record so ambiguous in its make-up. Without becoming deeply entwined in the subject matter, much of Waiting... is open to interpretation as to whether or not the narrator is singing in the first or third person, and it's these little intricacies which make both the record and its creators so alluring. Delve further into Waiting...'s goldmine and the perky two-minute frenzy of 'So Tired' coupled with 'Daniel''s winsome lament ("Please believe me") and ethereal closer 'Last Conversation' all provide further evidence that Veronica Falls are anything but proverbial one-trick ponies.

Although not quite possessing the gobsmacking "WOW!" factor of Veronica Falls' debut, Waiting For Something To Happen is an often revealing and utterly compelling follow-up that is sure to feature in many an end-of-year best of list come December.