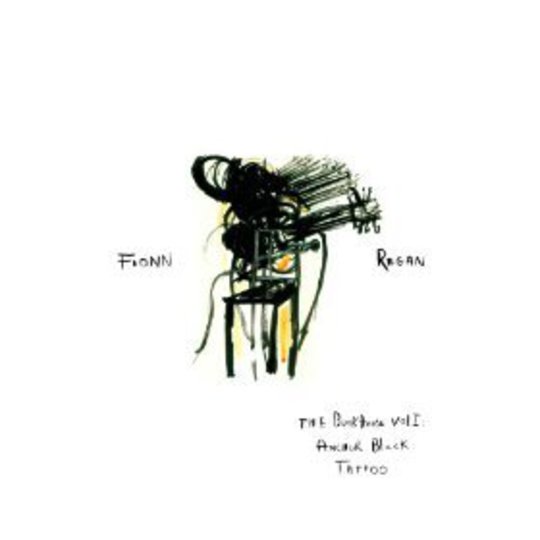 To the campfire of indie-leaning folk returns Fionn Regan. Armed only with the songwriter’s principle dietary requirements - acoustic guitar and four-track recorder - and a pathological aversion to the major key, The Bunkhouse Tapes Vol. 1 elegantly captures a vast and melancholy warmth. It’s not without charm, and it’s not without earthiness. To regard Regan’s work is to enjoy a talent pruned of all pretension. His obsessiveness in this respect borders on paranoia, rhyme schemes glimmering with elemental simplicity, like residual sea salt the waves kicked against the shore.

Regan’s fine and underrated catalogue to date signals a complex writer possessing a deft personal touch: so understated yet so muscular, so vital. It’s perhaps no accident that the titular tattoo is, by tradition, the ink of choice for successful transatlantic sailors. Indeed Regan himself, a man given to decorating interviews with flamboyant boating metaphors, here exudes the European serenity of a man who has passed comfortably beyond his bleakest struggles. He has an unswerving composure that can seem frustrating, shy and disingenuous, but also mysterious, exciting and virtuosic.

Before diving into Bunkhouse, it pays well to acclimatise from the precipice. Notice the rippling horizon, the frolicking bass notes, bat away the peripheral fly of impatience. Even when you suspect Regan’s raking his own soil, he operates largely in the third person which helps keep our empathy at arm’s-length. Take ’Clara to Calary’, a Leonard Cohen-esque homeland-ballad that smoulders with a distant radiance, like a troubled and intelligent lover who won’t open up: “When his pen’s on the page, he cheats death, has no age / When his pen’s off the page, he is old filled with rage”.

Frequently found observing non-specific company, the Regan of Bunkhouse rejects the emotional availability of his previous work; the narrator is neither victim of nor victor over his kingdom’s loves and cruelties, but merely a sympathetic witness. On ‘Mizen to Malin’, nature kicks back against human greed as Regan receives sinister prophecies from sources as disparate as sentient gale warnings and the speaking Irish Sea. Like a hastily-acquired tattoo, the album’s emotional restraint is perhaps symbolic of maturity - masculinity, even. But beneath the record’s subconscious topography you’re occasionally left grasping for beauty unstained by wisdom: a payoff with the disarming pathos of ‘Put a Penny in the Slot’s “I can’t help from cryin’, I wish you were mine”, or of ‘Sow Mare Bitch Vixen’s wry confession: “I’ve always had a thing for dangerous women.”

Not to worry, however - redemption comes in waves. The stomach lurches at one point during ‘The Bunkhouse’: a line of patience and quiet fervour, delivered with such cool and wizened poise you want to shake its hand and invite it for Sunday dinner: “You’re a businessman, wrapped in a kaftan / It’s all you’ll ever be / Go count your money - I’m a painter; you’re a framer.” Arguably the record’s most impenetrable incident, outlined in ‘The Gouldings’, involves a late-night backstreet passenger-seat road trip to some vividly-remembered neighborhood haunt. Something about the journey induces in Regan an epiphany concerning a current relationship so emotionally pummelling (and yet a relationship upon whose strangling grip the narrator is dependent) that it’s characterised as a request to be forcibly held underwater. The narrator is thus returned via hallucinatory intervention to a fairytale childhood dreamscape. It is, by any interpretation, a bewitching little number.

Less mannered than Laura Marling and just as reliable as Alisdair Roberts, Regan occupies a cosy and secure seat at the modern folk campfire. As an observer however it’s tempting to shoo him away awhile into the redwood forests, just long enough that he might wrestle with something a little meatier, a work as gently heartbreaking as it is cerebrally seductive.