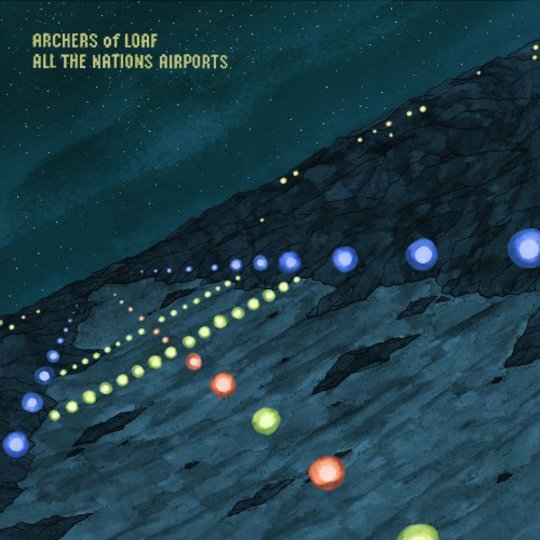 Archers Of Loaf have always been a band that sounds like they’re wallowing, gloriously, within their own over-bearing sense of misery. Even the faster tempos of their previous two albums (Icky Mettle and Vee Vee) all created a sense of insecurity. And All The Nations Airports was to be the band’s discontent album. It contained the band’s most graceful sighs and also their loudest attempts to burst through their past labels.

It was released in 1996, the year after the band had completed a huge tour with Weezer that had with it the expectation of a launch pad to the big time. It didn’t come off though; the band’s sound too heavy, with too much clanging and not enough nimble riffing for the punk-lite audience. It was, in retrospect, a mistake. A sense of disappointment is palpable in this album - possibly as a result of such an un-rewarded emotional investment.

For all the challenging layers to the music, there are also massive songs. None more perfect a collision of beauty and ugliness than the title track. Interestingly the 4-track demo versions of every album song - included in this remastered reissue - actually give great insight into the building of this album, as they are not just pre-mix desk takes but band leader Eric Bachmann’s initial idea dumps. The title track demo shows the original thin thread, with programmed drums and melodies driving the music. Cut to the album version and the desperation is partly inserted, through Bachmann’s vocals being buried beneath the weight of the bass. It’s almost a shame to hear the album version first, as it becomes the more impressive for hearing its development.

The most obvious AoL put outs on this album were the ballads and instrumentals, evoking the typical fan-boy’s discontent at change, even if ‘Attack Of The Killer Bees’ is as heavy as anything they'd ever done. ‘Chumming the Ocean’ plays soporifically, with rusty, clunky, piano tones; and ‘Acromegaly’ chimes like a minimalist piece, growing and turning into the softest explosions of guitar distortion.

‘Assassination On Xmas-Eve’ tells of a series of institutional mess-ups that allows Santa to be assassinated. For all its satirical tone, it sounds as stern as a song based on a true disaster, flecking humour into the band's morbid prophecies. It closes with ‘Little Jets’, an initially piano-led track quickly becomes menaced by low bass notes. It continues to develop into a dirge and faux jet engine sounds are used as drones. The bass and guitars continue to grow into mangled, unpleasant keys and tones as Bachmann continues to gruffly bark about ‘swollen skies’

All The Nations Airports ends a mess, a superb mess, but a painful one too. For all its song-craft and staunch commitment to impact through arrangement and approach over volume, All The Nations Airports feels like an album born of negativity. It’s frequently a superb listen and often a real eye opener for its jerks and shocks, but it's an album to brace yourself for.