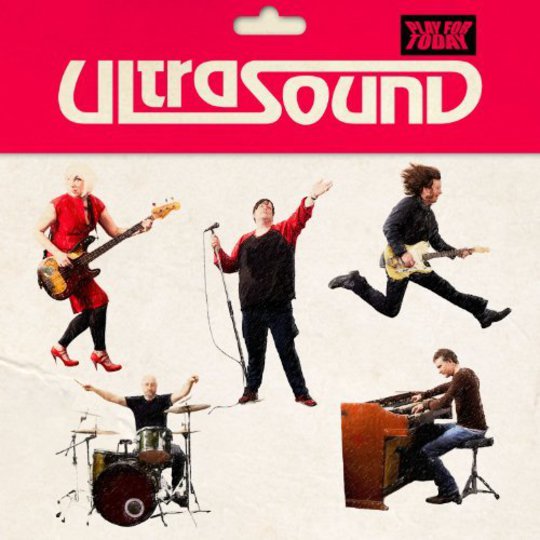 For the uninitiated, a potted history of Ultrasound.

It is the fag end of Britpop. Oasis have floundered, Blur have gone to Iceland, Pulp have gone mental, Suede have gone sort of crack-tronic and Elastica are just gone. Panic ensues. Who will step into the breach? Menswe@r are an in-joke that got out of hand, Marion's trumpeting is really based on one song and, though some incredible bands exist, no one seems to have it in them to carry every indie kid's hopes. Those bands can't fill Knebworth twice, they can’t fill Mile End Stadium, they can’t even fill the Astoria. But what's this? Those tartan trousers look about the size of two Knebworths and that fat guy in make up on the cover of the NME is filling them with gusto. He is Tiny from Ultrasound and it looks like they’re the band who will save British rock music from collapsing into itself. Thank fuck.

Ultrasound were decadent and dramatic and iconic and were proper Performance-style projections of #rocknrolllifestyle. Almost to pantomime levels. They were duly signed up to Suede's label and plastered over every rag's front cover before they'd had chance to blow their noses. And that's where it all went wrong. The British public had had many next big things hyberbolically thrust into their retinas between '94 and '98 and were sceptical from it having seen too many These Animal Men gunned down or Powders not hit.

Worse still, style mags had taken to them as quickly as the musos. This implied (unjustly) that this was a band minus substance and therefore not to be trusted. So, quite to the opposite of intentions, they were on the back foot before they had really even started AND, thanks to the media saturation, every fucker knew it. Which was a real shame. Their epic Floyd-ian debut Everything Picture had all the force of Definitely Maybe, all the smeared eyeliner of Generation Terrorists, a lot of the grandeur of Dog Man Star, and all the vulnerability of...well, no one was really doing vulnerable, but it had vulnerability too. It was so mighty and brilliant and towering. It was a double fucking album. It was amazing, but the PR bluster had blown away all but the boldest fan and by then it didn't really matter anyway. Tiny had compounded the style problem by appearing in a London Fashion Week show, lifting his shirt at the end of the catwalk to reveal the legend 'unique' scrawled across his considerable midriff and was followed by Matt and Andy making an unscheduled naked appearance: the maddened results of a joke conceived and carried out under the influence of LSD. And then the guitarist ran off with the keyboard player’s fiancée. At Glastonbury 1999 they literally split the band up onstage. Sorry, everyone. Turns out that the party actually is over. Here’s Gay Dad to save...oh, hang on, no, no...wait… here's Terris....no, sorry, as unlikely as it sounds it looks like it's gonna be Travis who will step up and Prozac music out with a nice dose of massive bland. And then Coldplay. And then... But those are different stories.

In about nine months Ultrasound went through all the extreme learning curves, ego massages and crushing disappointments that most bands go through in ten years. So, for a group who didn't so much burn out and not fade away, but combine the terror and suffering of the Manson Family killings, Apartheid and every Tsunami ever, why come back? The few small gigs they did last year, though excellent, must have kept their pets in Pedigree Chum for all of 15 minutes and the painful dramas hadn't gone away - the keyboard player quit for much the same reasons as he had before and went back to his day job with a far bigger band. Given the great force of those shows it’s fitting that ‘Welfare State’ kicks off Play For Today in impressively dramatic tone. A self-proclaimed clarion call. A familiar display of classic Ultrasound bombast/psych-out/bombast. But this is slightly misleading seeing as this album is, somewhat predictably, saving mothers and babies from the building that it’s burning.

Where 'Beautiful Sadness' is a very welcome 'Aire & Calder Part Two', ‘Between Two Rivers’, for all it's feedback, squelches and mob vocals, ambles nowhere for a while then falls down and vomits a little bit. Where ‘Twins’ continues the memory jog a display of power that borrows from ‘All You Good Good People’ but far better arranged and executed, ‘Glitterbox’ is like a drunk Shakespeare’s Sister doing ‘Stonehenge’ in a condemned karaoke bar that Castleford Council forgot to turn into an O’Neill’s.

It always used to be the songs that masterminded the fuck-dusting the drums would give the deranged genius synths as the Bolan guitars pouted and Vanessa’s insane backing warble went bonkers, but now, far too frequently, the songs go missing leaving all those tails to wag the dog until he’s pretty much dead. You see? This is what happens when a band collapses and indirectly gives Starsailor a crack of the whip. And although, ‘Nonsense’ is a gorgeous, gorgeous Byrds-y folk rock jangle-thon (the only real departure from the original glam-ifesto) it can’t save Play For Today from being not quite right.

Ultrasound were never gong to come back and make good on their 15 year old promise of saving guitar music, however timely it may seem. Too much drama and bitterness. Too many festering wounds remain too raw. Too much damage too close to the surface. They still have 'it' in flashes, but for the intended scale of their music, the budgets and the moment have certainly passed. This album is fine – a few gooduns, a few kippers and a ‘Nonsense’, and the live shows are still incredible, but they (and this) are definitely a mixed fortune version of memory lane, rather than a bold, new (though massively tardy) reclaiming of the flame.